LVIV, Ukraine - Hundreds of thousands of people have been displaced by the ongoing conflict in eastern Ukraine. Many are women with children, like Ketevan, a young woman whose recent displacement from Artemivsk, a city in the Luhansk Region of Ukraine, was the second time she has been forced to escape violence.

At age 12, she left her home Sukhumi, in Abkhazia, to escape conflict there. Now, she and her 4-year-old son, Illya, have been forced to flee from Artemivsk to Drohobych, a city in the western Lviv Region.
“I am now staying in a student dormitory with many other women with children from my region,” Ketevan said at a distribution of UNFPA-supplied emergency dignity kits. “I am so grateful as there wasn’t just a room and furniture there for me, but every little spoon, pot and bedding [we would need]. That was very heart-warming.” 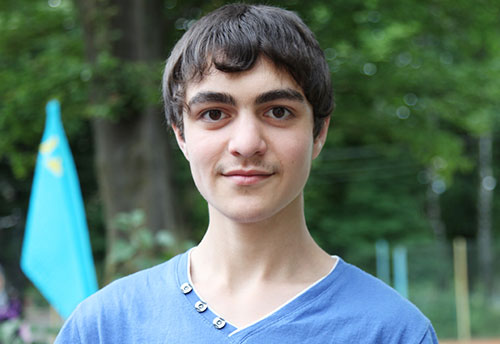 Senaver fled with his family to Lviv Region a few months ago. Photo credit: UNFPA Ukraine/Olena Kulyk
Nearby, a young man named Senaver rocked his newborn baby sister in a crib. Originally from Simferopol, Crimea, his family fled to the Lviv Region a couple of months ago. Senaver and his family are among many ethnic Tatars who have fled to western Ukraine. When his family arrived at a small village in Lviv, his mother was pregnant with her sixth child.
“Once the people of that village and the neighbouring ones heard there was a family from Crimea, they brought us enough household supplies and food to last four months,” he added. When the time approached for his mother to give birth, the local community helped the family move to Drohobych, closer to the local hospital. Senaver’s family has also received UNFPA’s package of basic supplies.
In June, UNFPA delivered 400 dignity kits for individuals and families, containing supplies such as toothbrushes, toothpaste, shampoo, soap, sanitary pads, toilet paper and laundry detergent. A second batch was distributed in July through UNFPA’s partner Caritas Ukraine. An additional 19,000 kits have been procured with UNFPA’s emergency fund and are being delivered to displaced families.
Some kits will also be air-lifted to those who remain in the conflict-torn Donetsk Region in the country’s east.

Caritas Secretary Hryhoriy Seleshchuk emphasized that those who were forced to leave their homes, often with few belongings, are not only in need of shelter, food and supplies – they also need help coping with conflict-related stress, as many families have been separated and conditions continue to deteriorate back home.

Displaced youth attend a summer camp in Lviv. Photo credit: UNFPA Ukraine/Olena Kulyk
“We try to provide them with all they may need in the new place,” Mr. Seleshchuk said. “This is not only about giving them bread, but much more about hope.”
Of the 140,000 people internally displaced by the conflict, over a third are children. UNFPA operates a variety of programmes to help them cope with their experiences, including a recent summer programme reaching 98 adolescents and children who have been displaced from the Luhansk Region.
The summer camp brought them to the Tsarynka Recreation Centre in Lviv. Natalia, a teacher from the town of Starobilsk, accompanied the group on a bus journey through the Poltava and Zhytomyr regions, with two overnight stops.
“The first evening, when the children had to spend the night in Poltava, they all were surprised by how quiet and peaceful that place was,” she said. “They realized they had become used to the sounds of explosions, of automatic machine-gun fire and bombings.”
UNFPA supported and financed the programme in cooperation with the Ministry of Social Policy. UNFPA financial support also enabled a separate group of 80 children from Luhansk to stay at a youth camp in the central region of Kremenchuk, where they enjoyed recreational facilities, met local peers and received psychosocial support.
- Olena Kulyk