Dispatches from the road: Goodwill Ambassador Ashley Judd on conflict, abuse and healing in Ukraine

This spring, humanitarian, writer, actor and UNFPA Goodwill Ambassador Ashley Judd travelled to Ukraine. During her weeklong trip, she met with survivors of gender-based violence and internally displaced women and girls who have fled the conflict in eastern regions of Ukraine. Below are excerpts of her diaries from the mission.

KRAMATORSK, Ukraine – It’s amazing to me, on this, my first trip to Ukraine, how beautiful it is, and how much ugly gender violence there is. Every fifth Ukrainian woman has suffered from physical and/or sexual violence. Between 2007 and 2014, the incidence of violence against women increased from 18 to 22 per cent.

Places that are pretty can hide ugly situations. To make my point, UN security told me yesterday that this area is a Zone 5. Yemen is a Zone 6. The Democratic People's Republic of Korea is a Zone 6. Other Zone 5s include Afghanistan.

My first group today is a gender-based violence group. 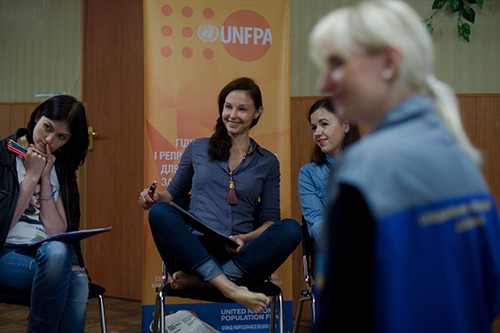 The psychologist succinctly described the cycle of intimate partner violence. Addressing first the core causes and systemic reasons, she and the group of five women listed the perpetrators’ low self-esteem, unresolved child and adult trauma, an impaired family system.

The tension in the home builds. Then, maybe the partner comes home, and with the sound of the door knob turning, the anticipation and tension escalate. I said that, in English, we call this “walking on eggshells.”

A typical scenario is that dinner is served and some little thing is “wrong with it.” Anything, really, can be an excuse for the escalation into violence. The aftermath was also perfectly described: The cycle of blame, remorse, regret and, ultimately, most debilitatingly, the way we internalize the blame and shame, and come to believe it really was, somehow, our fault.

I was sitting as both an equal and someone who has been through this process many, many times. Recovery is about purging what never belonged to us, someone else’s shame, which becomes our own toxic shame.

Intimate partner violence was already a pervasive social problem in Ukraine before the war began. UNFPA’s needs assessment in January 2015 confirmed what was known: Conflict causes violence at home to escalate. The share of violence survivors during the conflict was three times larger among internally displaced women as compared with local women. Perpetrators act out social stress on their wives, girlfriends and children.

Returning combatants behave violently at home, including in reaction to their Post-Traumatic Stress Disorder. It has been proven by research – 75 per cent of violence is caused by people women know. Women are even more separated from social support and their chances of even learning about services that can help them decrease. Gender stereotypes have no chance of improving. Boys and men have little exposure to gender equal attitudes and behaviour. 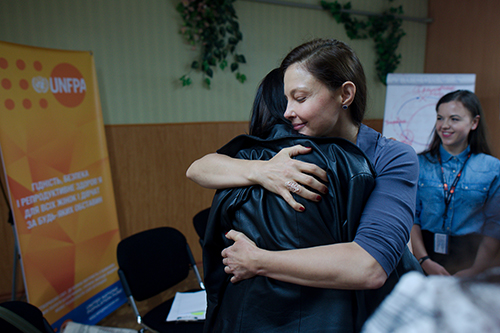 Irina* is crying. I take her slick, soft cheeks into my palms and kiss them. I sense some of this crying is about the violence, the carried and the stored violence of her dad hitting her, hitting her 8-, 7-, and 3-year-old siblings, and her mom.

But it’s equally clear she is a marvellously resilient girl. Speaking with Irina’s mother, Tatiana, I offer that her six children behave very differently from most children who have experienced physical violence. They are neither withdrawn nor frantic. If Irina is anything like I am, and my many friends recovering from violence, she’ll have her row to hoe. It will come up, it will come out, it will affect her choices, her boyfriend, relationships, and her self-worth. But for now, there is so much joy and connection. Connection heals, connection can save.

Tatiana speaks openly in front of the kids about the violence, because I have asked her what keeps her going: “The children. I live for them. I don’t have a husband. Maybe someday I’ll have another one. But these children are here; they are permanent.”

It’s been only since 29 April that she effectively, at last, kicked him out. He’d been hitting her off and on for years. But, as with so many women, so many mothers, there was one time he hit one kid one time too many, and she was able to do it. Get. Him. Out.

Tatiana mentioned the mobile psych social unit, and how they gave her tools, strategies, information about resources, and hope.

UNFPA’s 21 mobile teams, composed of two psychologists and a social worker, have so far received more than 5,000 requests, operating in 307 locations. [Editor’s update: As of 1 August, this number was over 7,400 requests.] Over 60 per cent of survivors of gender-based violence who approached UNFPA had not reported their cases before, or sought any medical care. The primary reasons were that they believed they could handle the situation on their own or they did not believe anyone would be able to help them. In addition to the lack of quality services, there is a tendency in Ukraine to silence such problems.

Now Tatiana knows she is not alone. She has filed for divorce. Her husband is allowed to visit the children only on Saturdays. He is paying some child support. The smallest child receives a stipend from the government. She shows me her bad knee, and says she has applied for some disability support. Her strength is an incredible power that comes from a deep well inside of her. 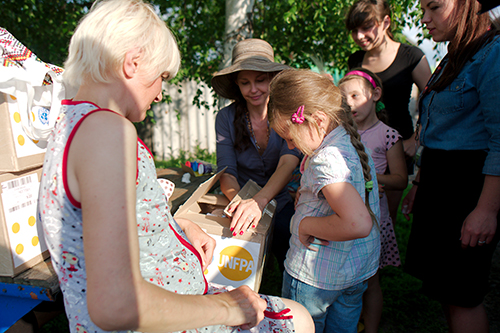 Tatiana and her four children are survivors of domestic violence. © UNFPA Ukraine/Maks Levin

Wild hydrangea grows here, just like in the Smoky Mountains at home. Everything is so familiar. If I looked at a picture of their battered cook pots, the over-tidiness of everything in spite of the makeshift nature of the shelter, I’d shrug and say, “Any poor country.” But Ukraine really isn’t just any poor country. Literacy is over 90 per cent; secondary school enrolment is over 80 per cent. There is piped water. There is a latrine. There is electricity.

And there is violence.

And there is help.

Along with the mobile teams, UNFPA has supported a 24/7 hotline for survivors of gender-based violence, with more than 6,617 calls received and addressed since January. [Editor’s update: More than 16,000 calls were received between January and June 2016.] They have trained 600 health practitioners in the provision of health services to survivors, and trained over 600 police staff in affected regions on reacting to cases of gender-based violence.

To raise awareness among affected populations about gender-based violence and to support community-based prevention, UNFPA has given mini-grants to 18 NGOs serving violence survivors and has provided technical assistance to 21 social service centres for family, children and youth.

Eighty per cent of girls and women who have come to UNFPA share that this is the first time they have ever told someone they are being hit. Fewer than 15 per cent of them report abuse to the police. 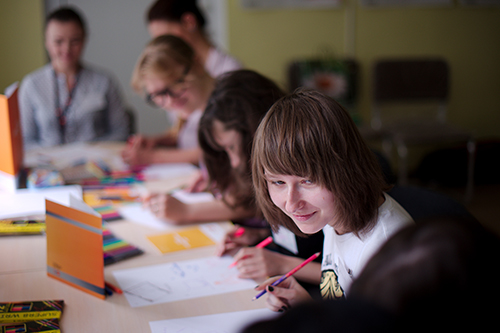 My new friends in art therapy today, for all of them it was their first time. I am rather amazed at that, given the explosion of hope that rang out in their voices and showed in the straight backs the moment we stood up.

Alina, the therapist, was great. The art therapy was wonderful, and worked in me as well as in anyone else. Today my new friends came in, bravely, to a therapy group for the first time in their lives, and got so much information and relief.

We shared dignity kits. Since the outbreak of the conflict in the east of the country, UNFPA has distributed over 24,500 individual dignity kits. They can include menstrual care stuff, soap, toothbrushes. It’s jarring to be reminded by a box with the UN lettering that we are 40 kilometres away from heaving shelling, the daily deaths of soldiers and a war that is intensifying.

Someone mentions how the day was incredible, how everyone’s hearts were so open. I am surprised when she says, “Thank you for sharing your wounds. Everyone is touched, including me.”

The world gives so much to me. People give so much to me. As with Jordan, today I received gifts from those living in relentless hardship, with war inside and outside their homes, who have ostensibly so little to give. Yet give they did: An icon, peonies, wildflowers, laughter, hand-holding, children riding on my shoulders.

I begin to cry when Anastasia hugs me farewell at the airport.

I’m surprised; I didn’t feel it coming. And it makes sense. I have loved it here in Ukraine. This trip has felt deep and rich. The level at which I have been moved, connected and affected is far beyond any number of days the calendar may say I was here.

I also take pictures, to have another handy way to remind myself of the fantastic work, the clever and targeted programming, the great number of vulnerable Ukrainians reached and helped.

I say I’ll come back, if only to myself. And I will, in my imagination, in my memories.