Delivering Support to Syrian Women as the Crisis Worsens

DAMASCUS, Syria — Like thousands of other people in the capital and surrounding suburbs, Abdulahadi and Aisha, along with their four children, fled their family home as shelling in their neighbourhood intensified. But Aisha had an additional concern: She was in her last month of pregnancy. Tired and scared for the unborn baby’s health – and for the wellbeing of the other children – they went looking for shelter and basic services.

After a 7-kilometre walk, the family settled in a public school that had been converted into a temporary emergency shelter by a local NGO. There, they received food and were given mattresses in a small room shared with other families.

Aisha quickly shared with NGO youth volunteers her concerns about her impending delivery. She was especially worried that given the current circumstances, her family would not be able to afford the cost of a delivery in a hospital.

As luck would have it, UNFPA staff were visiting the school to assess the needs of affected families, especially pregnant women. Through a partnership with the Damascus University Hospital Maternity Centre, UNFPA staff ensured that the hospital knew Aisha’s case and arranged for transportation as well as free-of-charge delivery. 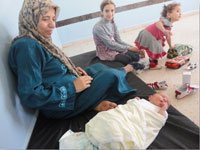 Aisha was lucky enough to get safe passage to a hospital for the delivery of baby Rawan.  Photo: UNFPA Syria

Early the next morning, Aisha went into labour. Thanks to collaboration between UNFPA and its partners, Aisha and Abdulhadi quickly reached the hospital. By 5 am the new addition to the family, a healthy baby girl named Rawan, was delivered safely. "I don’t know what would have happened if I had given birth at the school where we sought refuge,"said Aisha.

"I am so touched because in these difficult circumstances we didn’t except to have such great help," added Abdulhadi.

Many in flight are pregnant women

With hundreds of thousands in flight (an estimated 200,000 people left their homes in a single weekend as fighting intensified in around Aleppo) because of the growing crisis in Syria, not everyone is likely to be so lucky. Those on the run are predominantly women and children, as many of the men are choosing to stay and fight. And in any crisis situation, one in five women of childbearing age is likely to be pregnant.

Conflict typically puts these women and their babies at risk: Physical hardship and emotional trauma often complicates delivery. Health services typically deteriorate because of strained infrastructure and systems, limited supplies and high patient loads. In Syria and in neighbouring countries, UNFPA has deployed emergency supplies and equipment to make childbirth safer and to support medical interventions.

UNFPA Syria has also been providing over 2,000 hygiene kits (sanitary pads, underwear, soap, etc) to women affected by the conflict in Damascus and surrounding areas. Another 5,000 kits will be distributed by early August. In collaboration with the Syrian Family Planning Association, UNFPA has also distributed over 2,000 vouchers to be used for reproductive health services in local hospitals and clinics.

UNFPA recently received $800,000 from CERF, the Central Emergency Response Fund, UNFPA's top humanitarian donor, to pre-position reproductive health kits and supplies.  In all, CERF has countributed nearly $3.7 million to UNFPA's humanitarian efforts in the region, and UNFPA has allocated an additional $250,000 from its special emergency fund.

Delivering support across the border

In Lebanon and Jordan, where over 65,000 Syrians, mostly women and children, have sought refuge, UNFPA offices have also been at the forefront to provide lifesaving reproductive health care. "Many Syrian women who are pregnant and arrive in neighbouring countries have not seen a doctor in over a year because of the protracted conflict," says Henia Dakkak, Technical Adviser, who has recently returned from an assessment mission in the region. In Jordan, the UNFPA country office has supported mobile clinics and also designated female rooms in clinics to encourage access to reproductive health care.

Awareness raising activities have also been conducted in different sites to ensure that women know of services available to them. In Lebanon, reproductive health kits with basic supplies and equipment have been distributed in three major health centres. Hygiene kits which include 20,000 sanitary napkins have been distributed.

As conflict is intensifying within Syria, UNFPA is preparing to respond to the high demand in basic services at the border areas. As social ties are being disrupted, women and their families, including young people, will require increasing support.