As COVID-19 pandemic increases childcare burden, calls for Georgian men to step up

TBILISI, Georgia – As the COVID-19 pandemic spreads around the world, an unprecedented number of people are participating in forms of self-isolation, lockdown or quarantine. By some estimates, the number of people sheltering at home could reach into the billions.

School closures and stay-at-home orders are dramatically increasing the burden on parents, with women traditionally shouldering the majority of childcare responsibilities. The unequal weight of these responsibilities could have consequences on women’s economic opportunities and welfare, a UNFPA report indicates.

But fathers in Georgia are stepping up.

Prominent men – including actors, writers, athletes and celebrities – are sharing videos of themselves reading stories to their children, an effort to encourage men to play more active roles in their families.

It is a welcome distraction from the anxieties of the pandemic, says writer Giorgi Kekelidze.

“By reading fairy tales to children who are stuck at home, we can use these magical fictitious stories to take their minds off the worrying reality,” said Mr. Kekelidze, who is also the director of the National Parliamentary Library of Georgia.

“And we men, who have pretty seldom been doing this kind of reading, will now realize what a pleasant occupation it is,” he added.

Showing women they are not alone

Mr. Kekelidze is an active participant in the MenCare campaign, a UNFPA initiative to promote men’s equal engagement in caregiving and household chores.

Videos of Mr. Kekelidze reading children’s books have been broadcast on Channel One of the Public Broadcaster of Georgia, following just after the afternoon news. They are also shared on the MenCare campaign’s Facebook page.

These efforts took on a new sense of urgency when the COVID-19 pandemic arrived. Schools have been closed since 2 March, and a one-month state of emergency was declared on 21 March.

“Now that every parent is a teacher, and every house is a school. We see more than ever how difficult it is to be a caregiver, a profession that unites dozens of occupations,” said journalist and teacher Giorgi Liparishvili, a supporter of the MenCare campaign, alluding to the fact that women still do almost all of the housework and childcare in Georgia.

“Participating in this campaign is a way to show women that they are not alone, and to let children feel the support of fathers, brothers, grandfathers, uncles, friends and teachers.”

UNFPA has been advocating for men’s active engagement in childcare since 2014. A study commissioned the previous year found that fewer than 18 per cent of Georgian fathers had daily involvement in caring for children under age 6. The number dropped to less than 5 per cent as children reached their teenage years.

The MenCare campaign has been running in partnership with the NGO Care Together since 2016, with funding from Sweden. In addition, UNFPA is working with partners in the MenEngage initiative to promote more equitable participation in domestic work.

Participants say these efforts feel especially critical now, as families around the country huddle together at home.

“We always emphasize how essential it is for a child’s development to spend quality time with his or her father,” said Lela Bakradze, acting head of UNFPA’s office in Georgia. “This is especially true now as we focus our efforts on maintaining health, harmony and welfare during the global challenge posed by the COVID-19 crisis.”

“I was trying to see the story from the perspective of every character, so I tried to be a father, a mother and a child as well,” he said of the book, which he wrote specifically for the MenCare campaign.

“Now, when reading this book to others, what I wish most is for them to do the same,” he noted. “During these times of crisis when we are all staying at home, it is twice as important to ensure that women do not have to carry the whole burden.” 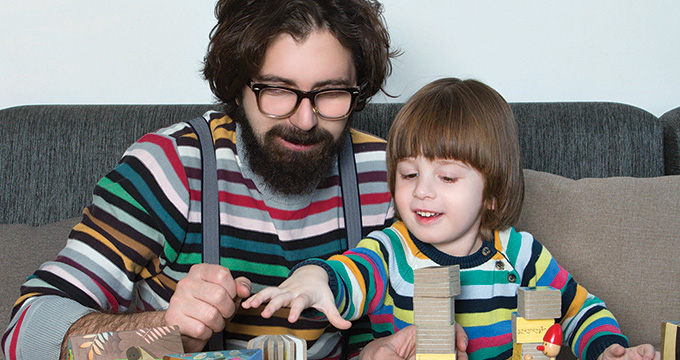 As COVID-19 pandemic increases childcare burden, calls for Georgian men to step up

How will COVID-19 impact fertility?