OSLO — No woman should die giving life, yet almost 800 women die every day from pregnancy-related causes, 99 per cent of them in developing countries.

This issue, considered the world’s major health discrepancy between women in rich and poor countries, was the focus of an event organized jointly by UNFPA, Sex og Politikk (the Norwegian Family Planning Association), the Norwegian Ministry of Foreign Affairs and the Nobel Peace Centre in Oslo on 10 February,  in honour of Mother’s Day celebrated in Norway a few days later.

UNFPA’s new Executive Director, Dr. Babatunde Osotimehin, who was on his first official visit to the Nordic countries, opened a panel discussion on how to improve maternal health in the developing world. The panel was followed by a projected photography exhibit, Congo/Women, which served as a reminder of women’s increased vulnerability in war and poverty. It was projected across the full façade of the three-store Nobel Peace Centre.

The exhibit was opened by Mr. Truls Wickholm, a member of the Norwegian parliament and leader of the informal parliamentarian network for sexual and reproductive health and rights. He talked about the importance of using Mother’s Day to create a deeper understanding about the difficulties women face around the world, with a particular focus on MDG5.

Photo project reflects the impact of war and poverty on women 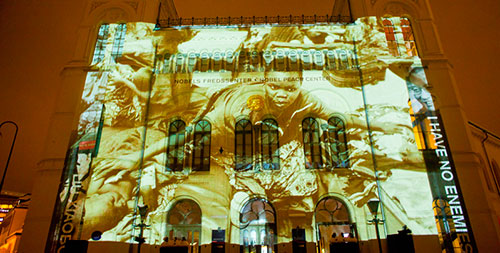 The projected images created a powerful statement about the impact of war and poverty on women in DRC, where women are often victims of sexual violence and have limited or no access medical care. Accompanied by music composed by Mario Grigorov, the images illuminated a beautiful, cold, dark and snowy Nordic winter evening. The film of the projection was also hosted by the Pulitzer Centre web site.

“Each of the women portrayed has a life story to tell, often marked with tragedy. These are more than just photographs,” said Mr. Marcus Bleasdale, one of the photographers who participated in the event.

The Congo/Women exhibition, with support from UNFPA, was originally opened at the United Nations headquarters in New York, and has traveled the world. The photographers behind the exhibition are Lynsey Addario, Marcus Bleasdale, Ron Haviv and James Nachtwey from VII Photo Agency. The exhibition is co-produced by Art Works Projects and Ellen Stone Belic Institute for the Study of Women and Gender in the Arts and Media. It was edited by J. Matthew Jacob.

Congo/Women is now scheduled to continue its tour to raise awareness of the issue of gender-based violence on 8 March, which marks  International Women’s Day, with openings that day in Paris and Berlin.