BOGOTA, Colombia – Solani Zapata first heard about female genital mutilation (FGM) when she gave birth to her daughter. Her mother-in-law insisted she had to cut her newborn’s clitoris. Shocked, Ms. Zapata refused.

She and her family are Emberá, a historically impoverished and marginalized indigenous group. Many lack access to health and education services. The most isolated communities have little knowledge about sexual and reproductive health or human rights, leaving them vulnerable to harmful practices like FGM.

FGM is by no means universal among the Emberá. Ms. Zapata, who was born in the western municipality of Marsella, says her mother and grandmother never spoke of it.

Yet among communities that do perform FGM, the practice is persistent. Called “cutting the callus” or ‘curación’, it is intended to prevent a girl’s genitals from growing into those of a boy. It is also believed to prevent infidelity. 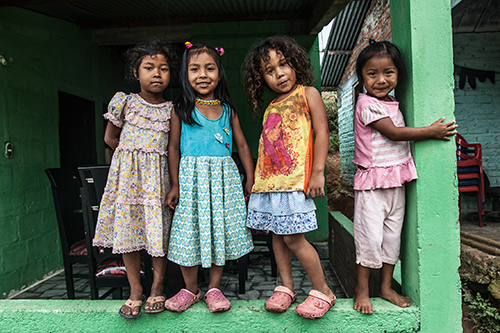 No firm data are available about the prevalence of FGM, but some estimates indicate that among Emberá communities known to engage in the practice, as many as two out of three girls have been cut. © UNFPA/Daniel Baldotto

“That's why they used to cut that thing,” Irene Guasiruma Rioverde, in the Valle de Cauca Department, told UNFPA. “Because if they cut that, they won't have any sexual excitement.”

But the practice is dangerous. "There are grave consequences,” explained Gloria Patricia Morales Medina, a social worker at the San Vicente de Paul hospital in Mistrató. “Death, major infections and loss of sexual satisfaction.”

Severe pain, haemorrhage, childbirth complications, and a host of other problems can also take place.

Women emerge from the shadows

Emberá communities that perform FGM do so quietly, so there are no reliable statistics on how many girls are affected. But in areas where the practice is known to occur, as many as two out of three Emberá women have been cut, according to 2012 estimates from the Colombian National Indigenous Organization (ONIC).

And the worst cases make their way to the headlines: In 2007, two girls in the municipality of Pueblo Rico died from infections caused by FGM, bringing public attention to the practice.

In response, UNFPA, together with the Colombian Family Welfare Institute and the Risaralda Indigenous Regional Council, launched the Emberá Wera – meaning Emberá Woman – project. The programme works with women, grandmothers, traditional birth attendants and indigenous authorities to end the practice.

Women leaders are essential in this effort. But only a few years earlier, such a step might not have been possible because the regional indigenous councils were dominated by men. 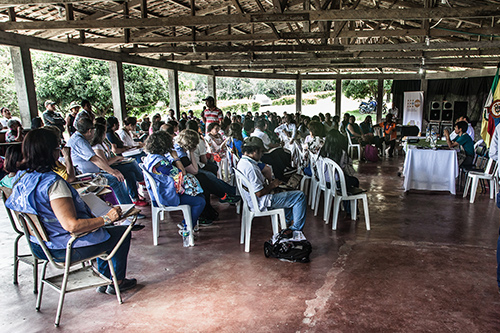 Community dialogues and training sessions have helped raise awareness of the consequences of FGM. © UNFPA/Daniel Baldotto

“Women would simply show up and sit quietly while men talked a little about everything,” Ms. Zapata explained. “We didn’t want men to continue to lead the efforts to address women’s issues. We have capable women who can do that.”

Women were not allowed to assume key positions without their husband’s permission. But Ms. Zapata was separated from her daughter's father. “You can do it,” other women told her. “You don’t have a husband.”

She became the regional advisor for women’s issues on the Risaralda Indigenous Regional Council.

A sense of empowerment

With UNFPA’s support, Ms. Zapata and a handful of other women began to travel to different Emberá communities, promoting dialog and education about the consequences of FGM.

“In the beginning, it was really difficult,” Ms. Zapata said. “Nobody wanted to talk about the subject.”

But slowly, people began to open up. The topic led to conversations about related issues, including sexual and reproductive health, gender-based violence, and gender equality.

Gradually, the process led women to reflect on their rights and their role in decision-making, Ms. Zapata told UNFPA. It gave her, and many other women, the confidence to speak out, demand change and become leaders, she said.

UNFPA also worked with hospitals and indigenous organizations to promote early detection and reporting of FGM cases. And training sessions were organized to help government officials and community members – including traditional health workers, healers and others – learn about FGM and related gender issues. 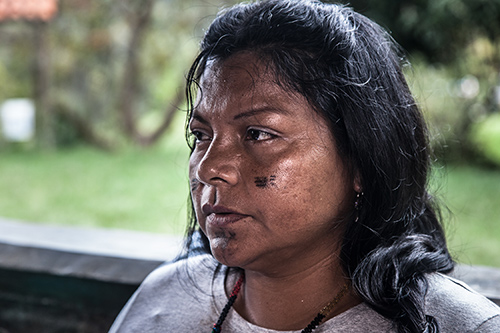 "Girls should grow up as they were brought into this world,” said Marinela Panchi Cortes. © UNFPA/Daniel Baldotto

Progress, and more work ahead

The practice has since been abandoned in many communities.

"We don't do it here anymore,” said Amanda Guasiruma Gaisama, in Valle del Cauca. “The adults know that if it's done here and something happens to the girl, there are consequences… We know it is not normal for a girl, even if it’s part of a tradition."

Still, the practice survives in pockets around the country, with health centres periodically reporting cases.

UNFPA, indigenous authorities and women like Ms. Zapata are continuing their efforts to end FGM once and for all.

“We as women can't mistreat our children, our girls,” said Marinela Panchi Cortes, an Emberá woman. “Girls should grow up as they were brought into this world.”