Since this story was initially published in early 2010, the contraceptive prevalence rate for long-acting family planning methods has already increased -- from 1.3 per cent to 4.3 per cent according to the Ethiopian Demographic and Health Survey, 2011.  This has helped boost the overall increase in CPR in the country from 14 to 29 percent between 2005 and 2011. Hormonal implants are one of three contraceptives given priority under the newly formed United Nations Commission on Commodities for Women and Children’s Health .

Since her initial training to become a health extension worker, Fanaye has taken clients’ temperature and blood pressure and provided information, counselling, condoms and pills.

Fanaye learned the procedure as part of a five-day training given by the Wolaita Zone Health Department with the support of UNFPA, which is committed to delivering a world in which every pregnancy is wanted. The training is part of the Government of Ethiopia’s comprehensive plan to make Implanon an effective, long-acting and reversible contraceptive, widely available throughout the country to women who want to delay pregnancy.

Implants are given priority by new UN Commission 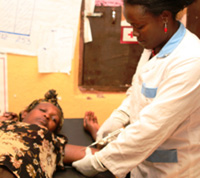 Introducing a new contraceptive method in the right way is a fairly complex operation, requiring thorough training as well as logistical and programmatic support. Fanaye and 12 colleagues received the training from a nurse supervisor at the Bosa Kacha Health Post, which provides primary health care for communities to the south of Sodo, the capital of the Wolaita Zone in the Southern Region of Ethiopia.

The health extension workers have a big task ahead – the new family planning method is expected to be very popular in the Wolaita Zone, one of the most densely populated areas in the country. Early assessments show that Implanon, which releases a hormone that prevents ovulation for up to three years, will increase demand for family planning.

Hormonal implants are one of three contraceptives that have been deemed as ‘underutilized’ and given priority by the new United Nations Commission on Commodities for Women and Children’s Health.

Once the health extension workers implant the plastic rod, the mother will be given an informational card that she will be advised to keep for future reference. The card is useful for follow-up and removal when the client requests it. Pre-and post-insertion counselling is provided to the mothers getting the service. The referral system has been organized in such a way that one supervisor nurse based at a Health Centre monitors and evaluates the work of five health extension workers in five Health Posts.

Fanaye needs to successfully insert four more of the Implanon rods before she is certified to conduct the implants on her own when she goes back to her Health Post. Beaming with enthusiasm she says “the training has given me essential skills and I will be ready to do the insertion on my own when I am done with the training here.” Indeed she articulately describes the procedure steps, including pre-and post-insertion counselling.

Fanaye's enthusiasm is shared by her other colleagues who are drawn from different Health Posts and deployed at the Bosa Kacha Kebele Heath Post for the training. They attentively listen to the nurse supervisor giving them the training. The trainees did nine insertions in one day and were eagerly waiting for more clients. 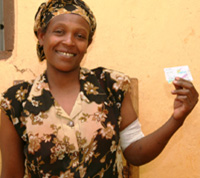 Fanaye's client after the Implanon insertion shows the information card about the contraceptive. Photo: Abraham Gelaw/UNFPA

The mothers seem enthusiastic as well: One mother waiting in line on the first day of the campaign had already borne ten children. Having so many pregnancies is risky in Ethiopia, where maternal mortality is high and increases with each child.

Longer-acting contraceptives can also make it easier for couples to break out of poverty. "My husband and I work on a small plot of land as farmers and we hardly make ends meet to support the family,” said one woman waiting to receive an implant. “We have decided that we don't want any more kids and raise the ones we have. I was using injectables before, which have a three months protection. Now that Implanon is available I have switched to it."

The scale-up initiative has gotten off to a good start in the Wolaita Zone. The five-day training was attended by 104 health extension workers from 14 Health Posts in six of the woredas (districts) in the zone. In three days, a total of 386 insertions were made, representing over 60 per cent of the target.

Building momentum, however, will require careful planning, logistics and follow-up. While the supplies of Implanon in the zone are adequate, according to Tarekegn Gebremeske – a Health Officer in the Wolaita Zone – it’s also important to ensure that additional supplies that may be needed, including iodine, supplementary iron and lidocaine, are also made available.

However, even a five-day intensive training is not enough to ensure quality of care, an important consideration. Post-training assessments and follow-up monitoring are important to ensure that women are getting correct information and counseling. And referral mechanisms must be in place to deal with possible side effects or removals, which are now being carried out by nurse supervisors.

Scaling up the programme

The Government of Ethiopia’s comprehensive plan for Implanon scale-up initiative initially targeted 32 selected woredas (districts) representing 4 per cent of country. The idea was to expand voluntary access to long-acting family planning methods in a country where the unmet need for contraception – especially for the latter methods – is quite high. A quarter of married women in Ethiopia have an unmet need for family planning services. It is believed that giving women access to Implanon as a long-term method at community level will help improve the contraceptive prevalence rate and reduce unmet needs, which are both MDG indicators of maternal health.

To date, UNFPA, through funding from the Global Programme on Reproductive Health Commodity Security, has provided support over $40 million in support, more than 60 per cent of which went into the Implanon Scale-up initiative. As part of the initiative, 20,000 Health Extension Workers were trained on insertion procedures and more than 2 million mothers have benefited from the programme. More than 60 per cent of the commodities and 25 per cent of the training cost in the Implanon scale-up initiative were covered by the Global Programme. Thanks to this initiative the prevalence for long-acting family planning methods has increased from 1.3 percent to 4.3 percent according to the Ethiopian Demographic and Health Survey, 2011, part of the overall increase in contraceptive increase in the country (from 14 to 29 percent between 2005 and 2011).