NEPALGANJ, Nepal — It is especially dark tonight, with the monsoon rain coming down, not hard but constant. The evening birds have taken refuge in their tree nests all around, and the only sounds are the far-off murmur of conversations, the occasional but insistent barking of dogs and the eerie crow of large black birds that fill the compound. The calm and quiet night disguises the adversities here. The beauty that conjures images of Shangri-la for many tourists and trekkers belies the grim reality that Nepalese women face.

Today’s itinerary was Nepalganj, one of the most western provinces of the country, which borders India and was, up until recently, the home of a ten-year conflict between the Maoists and the government. The town is located in the Terai, the fertile plain at the foot of hills rising up to 1000 meters.  Beyond the hills are a streak of snow-capped mountains that rise, like long eye-lashes over the hills and valleys, up to over 3000 meters. The mountain range is sometimes referred to as the ‘third pole’ here because of the endless glaciers, which, due to climate change are melting and causing more and more frequent floods and landslides -- both more severe year after year in their deathly toll.

Rapes and abductions conducted with impunity

Parveni is a humanitarian worker with one of the UN agencies working in Nepalganj. ‘It is too dangerous to be out of the house alone after 8 pm here in the city’, she says. ‘One hears more and more often that a rape or abduction has taken place. The last one happened in the city center when a woman was gang-raped earlier this year.’ The perpetrators were identified, but they are closely affiliated with one of the political parties and up until now, they have not been sentenced or even tried for the crime. The press carried the story of a policeman who raped a policewoman in nearby district. ‘These are the very people who should be protecting women, but women are not even safe to work with them.’ Trials can take a very long time, and often the survivor and her family will settle out of court, with community-level mediation. This border town is also the scene of trafficking of women and children, many lured out of the hillsides to vanish into the illicit trade of humans into India and beyond.

Women do much of the heavy lifting, and suffer for it

Women in Nepalganj testify to the difficulties of being a woman in Nepal. Passing a construction site, one can see that while men are the ones making the cement and laying the bricks, it is women who carry heavy loads of sand and cement on their heads to the first and second story of the skeletal building. Down the road a group of women have just arrived into the city from the rural countryside where they have cut down large, long logs and carried them, balancing the weight between the crown of their head and down their backs, each log reaching down to the top of their ankles. It is this strain, which women must bear, and which has contributed to over 600,000 cases of uterine prolapse in Nepal (also called pelvic organ prolapse or fallen womb). Two hundred thousand women require surgery to cure this affliction that causes pain as well as a constant smelly puss that makes them social outcasts or worse, sometimes earns them the label of ‘witches’ and the outright rage of their community. Advocacy has resulted in the establishment of a National Fund to cover expenses for the surgery.

Suicide is a major cause of women’s death

How difficult indeed the life of women here? 80 per cent of whom report being a survivor of gender-based violence in their lifetime? The definition varies, from abuse to rape to abandonment, but the result is the same. There is impunity for sexual violence and a women’s status in society is a life-long trap that curtails opportunities for education or attainment of even the most basic human rights.

For some women, life here ends in suicide. 'A harrowing, and unexpected, finding that emerged from the 1998 Maternal Mortality and Morbidity Study was the high number of suicide deaths among women of reproductive age, accounting for 9.5 per cent of deaths (MMMS, 1998). The recent 2008/09 study has shown that, a decade later, suicide remains the leading individual cause of death to women of reproductive age in Nepal, accounting for 16 per cent of deaths. One in five suicide deaths were to women under the age of 18,’ reports Options a UK-Indian consultancy that will further examine the issue.

Many questions remain. Are all the suicides being captured and reported, or is the social stigma too much of a barrier to understand this public health emergency? Then again, are all suicides really self-inflicted or is this the convenient label provided when a woman suddenly dies and disappears from the family fold? If so, then who are the real perpetrators? 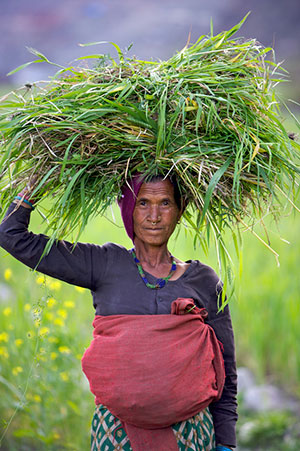 UNFPA has partnered with the Ministry of Health and non-governmental organizations to support rural reproductive health mobile teams which reach deep into the community to provide services to the most vulnerable: pregnant women and others of reproductive health age (14-44 years old). These mobile teams sometimes travel to the most remote sites by helicopter and then trek with supplies carried in back-packs to brave the difficult terrain and altitudes to reach women and their families with lifesaving assistance. The reproductive health mobile teams have identified women survivors of sexual violence who are living testimony of the cruelty of the civil war and the incomplete peace process. They offer a chance for referral to mental health/psychosocial services and legal aid. They identify uterine prolapsed patients for referral too and provide community awareness on prevention and women’s health. UNFPA is also working with others to support the National Action Plan on Security Council Resolution 1325, the national Campaign to End Violence Against Women, and conducting further research into the reality of life for women and adolescents to raise awareness and identify solutions.

But the work here to ensure that every women and girl is treated with dignity and respect is more than one agency or one government ministry can do, and it requires dedicated development programming as well as targeted humanitarian aid. Only this can provide the strength and rigor required in Nepal, to support women here, and prepare for the natural disasters that have become an annual event. While all in the Katmandu valley wish against hope that the inevitable Haiti-like earthquake will not strike this week, this month, this year, it is community resilience and sound, coordinated preparedness that will ensure the benefits of ongoing life-saving prorammes are not undone in a catastrophic emergency.