Amid Crisis in South Sudan, Youth Continue to Hope for a Brighter Future

JUBA, South Sudan – In 2011, Jamal Deng, 23, joined his war-weary countrymen in celebrating South Sudan’s independence after a devastating and protracted conflict with the north. As was the case for many young people in South Sudan, the better part of Jamal’s childhood was scarred by the conflict, and independence promised a new start.

“I travelled by bus all the way from Pibor to Juba to celebrate. Everybody knew the worst was behind us," he recalled. "At least we would be able to get jobs, get an education and plan for the future. We had missed all those opportunities because of the war.”

Today, Jamal is among an estimated 800,000 people displaced inside South Sudan by a new wave of violence that broke out in December. He lost two siblings in the recent clashes.

Jamal now bides his time at a phone-charging kiosk that he runs at Juba III, one of the expansive civilian protection camps set up in the South Sudanese capital.

The violence, which has not abated despite a ceasefire signed between the government and opposition forces in January, has left many dead and thousands more displaced. Although young peopel like Jamal still hold the key to their country's future, the conflict is threatening their prospects. Youth and adolescents have been torn away from their homes and communities, pulled out of school and forced to navigate unfamiliar, often harsh conditions.

Still, Jamal holds onto his hopes for a brighter future. “I’m still hopeful that when we finally start to agree as a people, we will create a future for ourselves. I don’t deny the effects of war because it destroys the future of young people like me. That is why some have decided to take [up] arms, but that is not what we should be doing,” he says.

UNFPA is reaching out to young people in the camps to help them make informed choices that protect themselves and their futures. 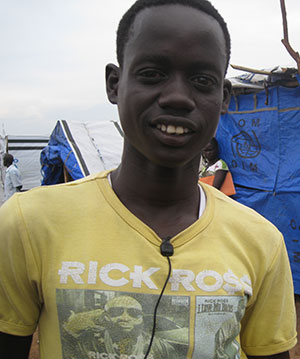 For 20-year-old Dol, the latest conflict has dented his ambitions to pursue a career in music. Photo credit: Kenneth Odiwuor

Across the war-ravaged states of South Sudan, it is not uncommon to see young boys in military fatigues, guns slung over their shoulders.

“You can’t build hospitals or schools or provide jobs for youth when you are at war. Things get destroyed, and young people’s future and aspirations die,” says Jamal.

At a makeshift tea kiosk not far from Jamal’s own outfit, a group of young men drum along to the beats of a popular reggae song. They juggle their time smoking and playing cards. One of them describes life in the camp as boring.

“There is little you can you do under these circumstances, because life is outside [the camp]. We listen to music to inspire us, and we puff tobacco to pass time,” explains one of the young men, who is reluctant to share his name.

In South Sudan, youth face myriad challenges. Illiteracy rates are high, and unemployment is a major concern for the large and restless youth population.

For many of them, a return to conflict has exacerbated an already dire situation.

“The conflict has disoriented the youth, and, for many, drug abuse has become a pastime, which sometimes results in violence among them,” explains Mary Marle, an Adolescent Sexual and Reproductive Health Officer at UNFPA in South Sudan.

For girls, more challenges ahead

For young girls like Lillian, 13, the conflict has brought with it even bigger challenges.

With her one-year-old sibling strapped on her back, she serves tea to the group of young men at her mother's tea stall. Her family is still too afraid to return home.

“Now I can’t go to school because they don’t teach here [in the camp]. I don’t have time for school work anymore because I have to help my mother run the kiosk,” says Lillian.

She is all too aware of the dangers the camp poses for young people and their health.

“Because of overcrowding in the camps, it has become difficult for many parents to advise their children on issues related to sexual and reproductive health, and adolescent girls are particularly vulnerable to sexual abuse,” she says.

To help protect these young people from sexually transmitted diseases and prevent unwanted pregnancies, UNFPA is conducting trainings for groups of young people selected from each of the country’s 10 states. After the training, they will become peer educators and share information on reproductive health and HIV prevention with other young people in the camps.