BENTIU, South Sudan – Nyador Dagey, 35, was three months pregnant and bleeding from a gunshot wound when she fled her village in Rubkona County, in South Sudan’s in Unity State, in March.

The hostilities between government and rebel forces separated her from her husband and four children. “They ran into the bush during the fighting, and I was left behind because I had been shot,” Ms. Dagey said.

She had been wounded in the upper leg, and moved only with great difficulty. Still, she traveled on foot for two days, accompanied by her younger sister.

“My sister had a small portion of food that we finished early on in our journey,” she recalled. “For the rest of the way, we survived on wild fruits in the forest.”

Together, they made their way to a protection camp in Bentiu, which now hosts more than 100,000 displaced people. 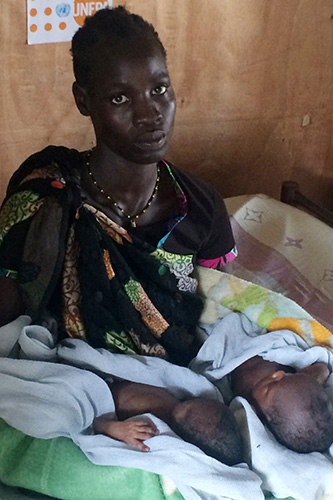 UNFPA volunteers in the camp helped her receive medical treatment for the gunshot wound. They also ensured she had access to antenatal care at the camp clinic.

She has been at the protection site ever since, living with her mother and sister. UNFPA volunteers regularly reached out to her, making sure she went for antenatal check-ups and knew where to go for care when she went into labour.

Last week, she gave birth to healthy twins – a boy and a girl – at a clinic supported by UNFPA and the International Rescue Committee.

Ms. Dagey marvels that she and the twins survived their ordeal. But her joy is incomplete because she has yet to be reunited with her husband and other children.

She hopes to go home someday, but it is not yet safe enough, she said. And when they do return, she is not sure what they will find.

“Our belongings, including the cows, have been stolen,” she explained. “Unity State has become a battle ground.”

For now, Ms. Dagey, her mother and her sister are struggling to make their temporary shelter into a home.

“The living conditions in the POC [protection of civilian camp] are dire. Food rations are not enough, so my mother will gather firewood to sell so we can have money for food. But that is not often because it is too risky for women to leave the POC,” she said.

Violence against women, including sexual assault, remains a major concern for those who leave the camp grounds.

But they have some basic items. When she was discharged after having her babies, Ms. Dagey received two so-called “dignity kits” from UNFPA. These kits contains basic hygiene supplies, including T-shirts, underwear, flashlights, soap, slippers and sanitary napkins.

And Ms. Dagey has hope for the day she will be reunited with her family.

“I am told that they are still together,” she said, “and safe.” 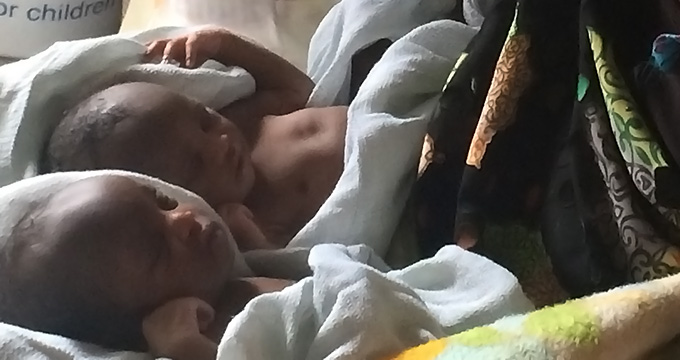