Acceptance of family planning grows in Afghanistan, but myths linger

HERAT, Afghanistan – "It is better to have one child rather than many, so you can give your child the support he needs and the best education you can offer," said Farzana, 37, at the family planning centre in Herat city.

This is the advice she gives to others, but her own experience has been very different.

She was married at 16 years old, and had her first child a year later. Like many child brides, she was not expected to pursue an education, so she never learned to read or write. Today, she has five children – and she wants them to have a very different future.

"I hope that my daughter will make the right choices and become a mother later, when she is at least 22 years old,” Farzana said. “By then she will have finished her university studies. I hope that all my children will be able to get an education."

In many ways, Farzana is representative of the average Afghan woman. The country’s fertility rate is five children per woman, and nearly a tenth of women give birth while still adolescents, according to the 2014 State of World Population report.

The country’s maternal death rate is also extremely high, partly because the health risks accrue as women experience more pregnancies. Nearly 18 per cent of deaths among women of childbearing age are due to pregnancy-related causes, a recent joint United Nations report has found.

By reducing the number of unintended pregnancies, contraceptives lower the risks of maternal injury and death. Family planning also empowers couples to choose the ideal family size for their particular circumstances.

Still, many people are hesitant to use family planning.

"This is because of lack of comprehensive information, inadequate counselling skills among health service providers, limited access to contraception, fear of side effects among users and misinterpretation of religious doctrine regarding family planning,” explained Abdul Malik Faize, UNFPA’s reproductive health expert in Afghanistan.

“Also, some cultural factors play a crucial role, such as son preference and tendency of having large family."

UNFPA is working closely with the Ministry of Public Health to ensure a reliable supply of contraceptives to government health facilities. UNFPA also trains health workers and provides technical support to health facilities, like the family planning centre in Herat City.

UNFPA is also increasing the family planning choices available to women. At the centre in Herat, women are able to select from a variety of safe, reliable contraceptive methods, including condoms, pills, injections and implants.

Contraceptives are slowly gaining ground in this conservative country. In 2003, only a tenth of married Afghan women used modern methods of family planning, according to a government report. By 2014, 23 per cent of married women were using contraceptives.

Farzana says most of the women she knows use injections or pills. "I know only few couples that use other methods. Even me, I use the injection," she said.

But some suspicion lingers. For example, many people are intimidated by contraceptive implants, even though they are safe and offer long-lasting protection against unplanned pregnancy. "People are afraid of using those, and husbands don't allow them out of the false fear that their wife will not be able to have children again," explained Nargis, a UNFPA-trained midwife.

Planning the best for her family

Sahra was also visiting the Herat family planning centre. She was married at only 14, and her first baby was born the following year. Now, at age 22, she has two children and relies on family planning.

"We only get enough to survive,” Sahra said, explaining that the family lives on her husband’s earnings as a rickshaw driver. “If I send my son to school, we will need more money for his school uniform, books, notebooks and everything else. We can't afford that."

She wants both of her children to expect more from life. For instance, she hopes her daughter will not get married until she is 20. And Sahra herself wants to wait before having more children.

"I want to wait at least five more years again before having my next child." 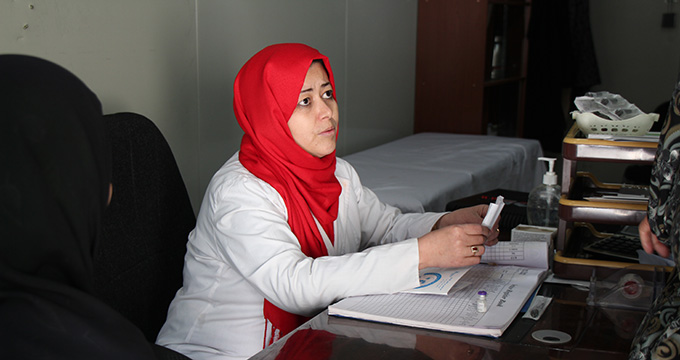 Acceptance of family planning grows in Afghanistan, but myths linger

High-level Ministerial Meeting on the Humanitarian Situation in Afghanistan