KERMAN, Iran – “Youth are the capital of Iran,” said Zahra Akbari, 27, at a UNFPA-supported training session for youth volunteers, held in in Kerman, Iran. “We’re filled with energy, and we are ready to make positive change,” she added.
The week-long training, by the Iranian Red Crescent Society (IRCS), taught the volunteers how to raise awareness of reproductive health issues and the special needs of women during emergencies. The volunteers – all young women – also took part in UNFPA's #showyourselfie campaign to promote the role of youth in development. 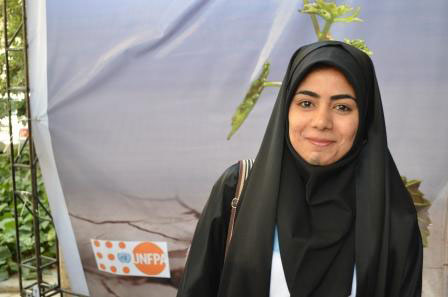 Leila Ahmady, 20, participates in the #showyourselfie campaign, advocating for more attention to youth in the future development agenda. Photo credit: UNFPA Iran
Young adults between ages 15 and 29 comprise about a third of Iran’s population, representing an enormous potential resource for the country. Iranian youth are increasingly well educated, with literacy rates at 97 per cent. And women, in particular, are excelling in education, having recently overtaken the number of men attending university.
Yet young people in Iran also face a variety of challenges, including high levels of unemployment. Around 70 per cent of unemployed people in Iran are youth. And women face even greater obstacles: the rate of economic participation among men is five times higher than that of young women.
“As young people, we represent a strong human resource and the future workforce of Iran,” said Leila Ahmady, a 20-year-old university student at the training. “We embody the future elements of Iranian families and the country.”
She and the other volunteers – 32 women representing 24 provinces – are key examples of the power and potential of youth.
Iran is highly vulnerable to natural disasters, which often affect the availability of essential reproductive health services, such as prenatal care, assisted delivery and emergency obstetric care. At the training, the women learned not only how to respond in these situations, but also how to train others as well.
The participants will go on to conduct trainings for youth volunteers in their home provinces, ultimately conveying the disaster-response skills they have learned to at least 2,880 women by March 2015.

During the programme, the women made a point of participating in the #showyourselfie campaign, a global initiative of UNFPA and Global Citizen, in which youth and supporters of youth urge world leaders to prioritize the needs and rights of young people. 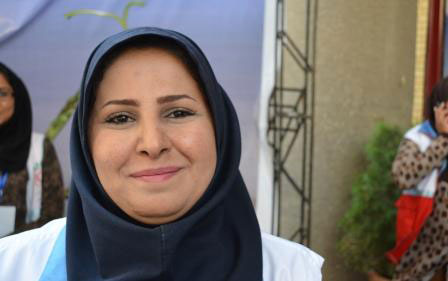 World leaders are currently debating development plans to succeed the Millennium Development Goals, the current global development roadmap, which will expire in 2015. Photographs shared via Twitter, Instagram or on www.showyourselfie.org will serve as a kind of signature to a global petition advocating for youth and youth issues to play a central role in the future development agenda.

“Young people are creative, strong and open-minded,” said 24-year-old Saba Bakht, a university student from Lorestan Province, as she took a ‘selfie’ photograph for the campaign. “We’re the generation that will build the future of our country.”
Maryam Silavi, 30, a social worker from Khuzestan Province, echoed that message as she took her own photograph: “Young people are in a strong position to come up with new ideas for making our communities better places to live.”