UNITED NATIONS, New York – What are the main obstacles for countries trying to reduce maternal death? And why are some regions having more success than others? Is it just a question of investing more resources? Do culture and tradition have an impact on maternal death? Or is it about the status of women in society and their right to access sexual and reproductive health?

These are just some of the questions that participants in last night’s SABC TV "The Big Debate" series tackled in front of a live audience at UN Headquarters in New York.

Organized by UNFPA in partnership with the South African Broadcast Corporation, the high-level panel was moderated by South African news anchor Siki Mgabadeli in front of a live audience made up of an invigorating mix of students, academics, doctors, and advocates, as well as personalities from various governments, the United Nations, NGOs and the private sector. 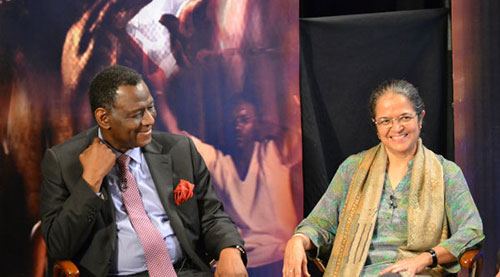 “Political will is the first and most important element in eliminating preventable maternal deaths,” said Dr. Osotimehin. "We need bold leaders and we need to change the narrative on maternal health.”

This was the resounding call from the panel and audience, on the same day as the UN General Assembly was hosting a special event on the future of the Millennium Development Goals, just a few doors down the hall.

The participants focused on the need to improve services within the health systems, to deploy resources strategically, to ensure human resources for health, and to invest in affordable commodities. Ensuring the broadest possible access to family planning and comprehensive sexual education for young people were also at the forefront of the discussion.

Speaking from the vantage point of developed countries, Mr. Friis Bach called for sexual and reproductive health to be part of the post-2015 development agenda and for donor countries to be held accountable.

"What can we do? Well, first of all we can live up to our promises," said the Danish Minister. He also called for the creation of what he called the “G0.7 Club,” referring to the repeated commitment of the world's governments to commit 0.7 per cent of rich-countries' gross national product (GNP) to Official Development Assistance.

Participants also took on the issue of cultural norms and traditions and the role they sometimes play in maternal mortality.

“What cultural sensitivity says that it’s ok for mothers to die? We must repudiate it,” said Professor Sen.

Ultimately, the future was pinned on the absolute necessity for education, gender equality and the economic empowerment of women.

“It is not about the money but about the value we place on our women and girls, and on ourselves,” concluded Dr. Osotimehin.

The "Big Debate"  will be broadcast by the South Africa Broadcast Corporation on Channel SABC2 in the coming weeks.