GADARIF, Sudan — When Ahfad University for Women in Omdurman began offering a course in community development in the 1990s meant for mature, illiterate women farmers, the main goal was to expand the students’ role in the economic life of their communities. But over the years, many such courses have expanded to touch on more intimate subjects, including reproductive health, early marriage and even female genital mutilation/cutting, a longstanding tradition in the area.

Several universities now offer similar community development courses, serving more than a thousand women from rural villages each year. The courses still focus on community organizing and literacy. But, because administrators realize that women’s health crucial to the success of their efforts, they now also emphasize maternal health, family planning and primary care.

In 2010, two of the universities, Gadarif and Gezira, took the courses further. They invited the UNFPA/UNICEF Joint Programme on Female Genital Mutilation/Cutting to enhance the curriculums by adding information about the negative effects of cutting and early marriage on women’s reproductive health, life prospects and well-being. Such discussion is highly relevant in eastern Sudan, where approximately 87 per cent of women have been cut, according to a 2000 UNICEF study.

Ayisha Gashem Adam Mohammed Abudulla is a 52-year-old mother of eight. She doesn’t remember when she was cut— probably at three or four years old — but nearly half a century later, she vividly recalls how she felt when it happened.

“I was in terrible pain and afterwards I felt very angry,” she says. “I have always wished I could be the way I was before the cutting because of all the pain it has caused me — during my monthly cycle, having sex and in childbirth.”

Ayisha, who is informally called Haja Ayisha, a term bestowed on her for making the Muslim pilgrimage to Mecca, was married at 13. “Because of the pain the cutting caused me, I was afraid of my husband and his sexual demands,” she says. I missed playing with other children and I felt as if my childhood had been taken from me.” Haja Ayisha had her first child at 15. 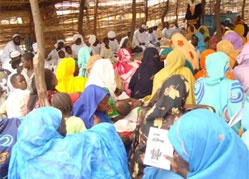 Women in Sudan attending an education session on FGM/C

For decades, Haja Ayisha’s life consisted of arduous childbirths, back-breaking work and caring for her family. But in 2010, visitors from the College of Community Development at Gedarif University came to her village with a staff member from the State Ministry of Social Welfare to tell the women about the one-year course that the university had been offering it since 2007 to 250 rural women a year at the Gadarif campus and three village satellite centres.

By the time Haja Ayisha signed up for the course , which meets five days a week from 10 a.m. to 1.30 p.m. at a centre near her home, discussions about the effects of FGM/C on women’s health were part of the curriculum.

Students react to the course

“This was not a hidden agenda,” explains Lamya Badri, gender national programme officer at UNFPA Sudan, who interviewed Haja Ayisha for this article. “The decision to address FGM/C and early marriage was championed by the dean of the faculty of community development at Gadarif and discussed with the university senates and boards and community and religious leaders.”
But some students mounted a small protest, and others in Haja Ayisha’s class were shocked.

“At first I was surprised,” Haja Ayisha says. “FGM/C has been practiced a long time; it was taken for granted and the community regarded it as something good. We had never been allowed to discuss it or speak negatively about it.”

But putting the practice in the context of community development and women’s health helped change the students’ thinking. Haja Ayisha understood the university’s goal of improving women’s health.

With their new-found interest in and increased understanding of their own well-being, the students now build on such networks as rural extension programmes and farmers’ groups to reach out to other women, teaching them what they have learned.

The women’s home villages are the ultimate target of the programme, says Ms. Badri of UNFPA Sudan, adding, “Nothing short of social transformation – true community development – is the goal.”

Haja Ayisha’s advocacy efforts against female cutting started in her own family while she was still attending the course. “I began to challenge the practice from inside my home through my family and neighbours,” she says. “I convinced them to come together and vow to fight this practice. We did that by educating everyone who plays an important role in this crime — husbands, wives and grandparents — about the negative impacts of the practice on their little daughters’ lives.”

First, Haja Ayisha helped her nephew stand up to pressure from his wife to have their daughters cut. “I explained to them the damaging impact of the practice and told them that Gedarif State has a law against FGM/C since 2003 that puts the perpetuator in jail.”

When his wife threatened to have their daughters secretly circumcised, the nephew swore that he would call the police, which worked. “Thank God,” says Haja Ayisha, “today his daughters are intact and perfect.”

At last count, 21 community organizations and seven women’s groups have been established by graduates of the university course in their towns and villages. Twenty communities in Gadarif State alone have publicly declared their abandonment of the practice.