CAPE TOWN - When erratic weather in Southern Africa precipitated food shortages last year, they were initially blamed entirely on drought and, in some cases, misguided policies. But the scale and depth of the crisis-which has left millions dependent upon UN-distributed food aid for survival-soon indicated that hunger was a symptom of a far deeper emergency. 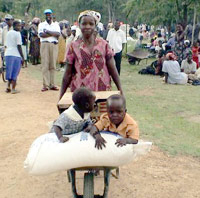 As Bunwi Makinwa, head of UNAIDS for East and Southern Africa, told delegates at at a humanitarian strategy meeting organized here last week by UNFPA, the United Nations Population Fund, "HIV/AIDS is diminishing the capacity of Africa to respond to any crisis, natural or conflict-related."

The week-long conference brought together UNFPA representatives from 16 African countries, members of the South African Government, and senior regional officials from the World Food Programme (WFP), the UN Office for the Coordination of Humanitarian Affairs (OCHA), and the Joint UN Programme on AIDS (UNAIDS), in Cape Town to discuss ways to better address reproductive health concerns as part of the UN-wide response to food emergencies in Malawi, Zambia, Zimbabwe, Lesotho, Swaziland and Mozambique.

UNFPA representatives from the affected countries reported that steadily increasing poverty and food shortages compounded by HIV and AIDS are severely harming sexual and reproductive health in the region. According to UNFPA Zimbabwe Representative Etta Tadesse, "Hunger and diminished access to health services, including reproductive health care, are taking a heavy toll on women, adolescents, and other vulnerable groups across Southern Africa."

The crisis is having a devastating effect on maternal health in particular. Malnutrition renders pregnant women more susceptible to infection, miscarriage and premature labour, and increases the likelihood that pregnant and lactating women who are HIV-positive will transmit the virus to their children.

To make matters worse, food shortages and high poverty levels are contributing to a decrease in the number of women seeking family planning services and antenatal care. The number of home deliveries is also on the rise, as the constant search for food for their families leads women to neglect their own health. HIV prevalence rates in Southern Africa are the highest in the world, ranging from 15 per cent among adults in Malawi to 33.4 per cent in Swaziland.

According to the UN, food production plummets by more than 50 per cent in households affected by HIV, as the virus targets people in their prime productive years and forces other family members to shift their labour from agriculture to caring for the sick.

For centuries, people in Southern Africa have adjusted to cyclical food shortages by eating less and relying on relatives and friends. But reducing food intake can be fatal for people who are HIV-positive as malnutrition weakens their already vulnerable immune systems, accelerating development of the virus and pushing them into full-blown AIDS. And traditional support networks have been decimated as most people who have not already succumbed to the disease are overburdened with the support they must provide to children of those who have.

The UNFPA meeting was part of the multisectoral approach to the Southern Africa crisis initiated with the opening of the UN Regional Inter-Agency Coordination Support Office in Johannesburg in September 2002. Dr Gebreamlak Ogbaselassie, a regional adviser on sexual and reproductive health, has been seconded by UNFPA to the inter-agency office, which also includes staff from WFP, OCHA, UNDP, FAO, UNAIDS, UNICEF and WHO.

Consistent with its emergency operations in other parts of the world, UNFPA is assisting in the procurement and distribution of reproductive health kits and commodities-including male and female condoms-and in the training and deployment of service providers to distribute them in areas affected by the crisis.

The Fund has also responded by stepping up its advocacy for better access to sexual and reproductive health services, and for greater empowerment of women, who generally carry the burden of care and support for people infected with HIV and AIDS.

In addition, UNFPA representatives at the meeting affirmed that country offices will intensify their efforts to address the acute shortage of condoms-for dual protection against HIV transmission and unwanted pregnancy-by establishing an inter-agency reproductive health commodity security committee, mobilizing resources through partnerships to address gaps, and procuring and distributing supplies and equipment.

One theme sounded by all the participants at the Cape Town meeting was that the crisis created by the HIV/AIDS pandemic is irrevocably changing the way UN agencies work together in Southern Africa. For its part, UNFPA will work to meet the increasing needs of partner agencies and nongovernmental organizations for relevant population, development and reproductive health data, for better planning and targeting of emergency interventions. The focus will be on dissemination of existing statistics, and rapid appraisals to fill data gaps.

Another recurring theme was the need to maintain pressure on donors to step up their financial support, and on the United States administration to reverse its decision to withhold $34 million in funding for UNFPA activities, as Africa faces one of the most critical moments in its history.

"UNFPA has long taken the lead in championing and supporting the rights of women and young people," said South African Minister of Health Dr. Manto Tshabalala-Msimang in closing remarks to the meeting. "As the six countries of Malawi, Mozambique, Lesotho, Swaziland, Zambia and Zimbabwe face the enormous challenges of the humanitarian crisis, and Angola continues with the challenge of reconstruction, we all must join forces to assist in all possible ways. Because my sister's pain is my pain. And my brother's tears are my tears."