MUZAFFARABAD, Pakistan — When the earthquake struck on 8 October 2005, Larmirjan’s house collapsed. She was badly injured, and her 18-year-old son was killed. Throughout northern Pakistan, 73,000 died and 3.5 million were left homeless.

While most survivors are now back in their home villages, Larmirjan and her family have nowhere to go. She and her husband came here from Indian-administered Kashmir 15 years ago. They face another hard winter with their four young daughters in a tent in a refugee camp. 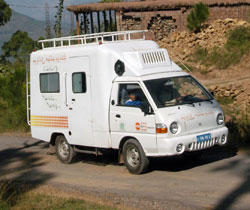 Mobile maternal and child health clinic staff and equipment on the road to the isolated village of Mastana Gali. Photo: Marc Westhof/UNFPA

But Larmirjan, who is over 40 and nine months pregnant, will at least have the chance to give birth safely, in a fully equipped hospital. She has had regular prenatal care at mobile clinic that regularly visits her camp and is staffed by a female doctor and a midwife.

These services are supported by UNFPA, the United Nations Population Fund.

Last October, UNFPA was one of many aid groups that responded to the crisis, working in partnership with the Government to restore medical services throughout the affected region. UNFPA moved quickly to establish and equip emergency medical facilities in two of the most severely damaged districts – Muzaffarabad in Pakistan-administered Kashmir and Mansehra in North West Frontier Province – with a focus on enabling pregnant women to deliver safely.

One year on, Pakistan’s internationally supported recovery effort has moved from emergency operations to a longer-term recovery phase. As part of this joint endeavour, UNFPA has set up temporary health centres, complete with women staff, equipment and supplies for quality reproductive and maternal health care.

Indications are that more women in the two districts, including those in remote areas, are using prenatal services, skilled delivery assistance, child health care and family planning than before the earthquake. In some places the level of care exceeds what was previously available. 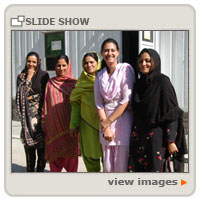 But enormous challenges remain in meeting health needs. As a second winter approaches, the vast majority of displaced people continue to live in makeshift shelters or tents. Reconstruction of some homes is under way, but only barely. Exposure, crowding, weak diets, bad water and inadequate sanitation compound health problems that existed in this poor region before the earthquake, including those related to pregnancy and childbirth.

“Eighty per cent of the health facilities were destroyed – that’s over 500 facilities,” notes Jan Vandemoortele, United Nations Humanitarian Coordinator in Pakistan. “We had a successful relief operation. We now have a very complex reconstruction.

“This winter the acid test of our preparedness will be the health sector,” he says.

At least 5,000 women give birth each month in the affected areas, where mothers often have six or seven children. Most deliver at home, and maternal mortality is high. Post-earthquake stress and rough living conditions have increased the risks for women.

“Nine out of every ten pregnant women we see are anaemic,” reports Dr. Fouzia Shakeel, a female physician in the UNFPA-supported maternity centre at Battal Civil Hospital. This leads to low-weight infants and an elevated risk of miscarriage or haemorrhage during delivery. Dr. Shakeel and her team deliver 30-45 babies each month.

Post-traumatic stress and poor diets contribute to a high rate of pregnancy complications and miscarriages among the earthquake survivors. At the Battal centre, two or three patients each month undergo lifesaving procedures after suffering incomplete miscarriages. Up to five women per month have convulsions or obstructed labour and must be sent by ambulance to a hospital in Mansehra or Abbotabad.

Before the earthquake, such women would have been more likely to die.

In recent months, pre-fabricated metal buildings have replaced the medical tents that numerous relief organizations put up in the weeks after the disaster. UNFPA is part of this effort, erecting and staffing 34 maternal and child health facilities in the hardest-hit areas.

In a region where cultural norms do not allow women to be examined by male physicians, the all-female, live-in staff provide primary care, prenatal checkups, and skilled deliveries round the clock.

At pre-fab rural health centres, a woman doctor and one or two skilled nurses known as lady health visitors treat up to 100 outpatients a day. In Chikkar, high in the hills above the Jheelum Valley, gynaecologist Dr. Aneela Adil and her assistant have in the past month performed 70 deliveries, provided lifesaving care to 35 women after miscarriages, and referred four patients to a hospital for Caesarean-sections.

“Mentally, these women have suffered a lot,” Dr. Adil says. “Most are coming with epigastric pain. They are anxious. They are living in stressful conditions. Winter is coming and they don’t have proper shelter. They need more counselling than medicine.”

A huge share of those killed last October were children, and many grieving parents now want new babies to take the place of those who perished. “Women are coming to me who had two or three children who all died,” says Dr. Adil. “So they are looking to me for conception help.”

At the same time, health workers report that, as more and more women learn that comprehensive reproductive health care is available, with women providers, increasing numbers are coming for family planning services.

In the busy rural health centre at Chattar Plain, Mansehra district, Nargis, 32, asks Dr. Seemi Khan to help her avoid another pregnancy. She is the mother of four – all survived the earthquake – and she says her husband has no job and doesn’t help her with the children. She has been getting contraceptive injections but wants a longer-lasting method. Dr. Khan shows her an intra-uterine device and explains how it works.

One reason demand for services is growing is the network of ‘lady health workers’ (LHWs) whom the Government trains and supports to educate women in their villages about hygiene and basic well-being, including healthy childbirth. Nargis and several other clients interviewed at the Chattar Plain centre said they had come at the urging of their local health worker.

The health workers report regularly to medical officers on their activities and on health conditions in their villages. During one such meeting at the Battal facility, several health workers spoke about widespread problems such as scabies, and complained about poor water quality. But they also said that villagers are now more likely to listen to their advice, to practise family planning, and to come with them to the clinic for assisted delivery.

Further evidence of the impact of the lady health workers is found in the sprawling Jawa tent camp outside Mansehra, the last such encampment in the district. One group of residents came last July, after rains flooded their post-earthquake settlement on a river bank, displacing them for a second time.

Two LHWs in this group say they are continuing their work in the camp. Kauser Shaeen distributes contraceptives and has a small supply in her tent. She proudly points out that she has just one child after five years of marriage.

Another group of residents in the same camp come from a remote part of the district not covered by the health education programme. At the camp’s maternal and child health tent, Dr. Mehnaz Akbar says that prenatal clients from this community have little knowledge of hygiene and often decline tetanus vaccinations and other care because of misconceptions.

“The biggest problem is poverty,” she stresses. Because of iodine-deficient diets, many patients have thyroid conditions that can aggravate pregnancy complications.

For the first time ever, mobile service teams are driving up mountain roads to visit isolated villages like Mastana Gali in Pakistan-administered Kashmir, where the earthquake wrecked 80 per cent of the homes and nearly everyone lives in tents or corrugated iron shacks. A female doctor and her assistant see patients in a tent, which can be set up in a few minutes. Their vehicle serves as a delivery room when the need arises.

News of the clinic’s arrival spreads fast, and up to 200 children and adults may show up in a single day. Team leader Dr. Shela Nawaz, a recent medical school graduate from Karachi, reports that patients suffer a variety of ailments, many related to poor hygiene and inadeqate water; scabies, respiratory infections and diarrhoea are among the most common. Villagers are grateful that the mobile clinic provides free medicines.

One young mother has brought her son whose ear is infected; she is also sick to her stomach. It is the first time she has seen a doctor, she says.

According to one resident, 100 babies have been born in this village of 6,000 since the earthquake. Among those who come to the clinic is Naseema, two months pregnant. Dr. Nawaz gives her a prenatal exam and guidance on nutrition and health, and advises her to go down to the nearest health centre to deliver her baby safely when it comes. 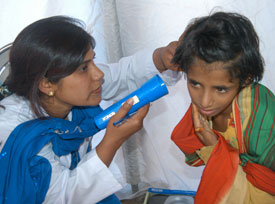 A growing number of women are following such advice. At the Garhi Dopatta rural health centre where the mobile unit is based, Dr. Afsheen Qayyum and her team have delivered three or four babies each day for the past two months. “Sure I’m tired,” she says with a laugh. “We work day and night, seven days a week.”

The staff is well trained to identify prenatal patients who might have problems that the rural health centres are not equipped to handle. They are sent by ambulance to higher-level facilities, like the pre-fab maternity centre at the Hattian Bala hospital, in the Jhelum Valley.

In the post-delivery room at Hattian Bala are several first-time mothers who were referred here for ultrasound exams before delivery. One is Nazia, 19. A month before the earthquake she got married and moved out of her home village, near Chakkar. The village was buried under a massive landslide, killing 3,000 people including her father, brother and sister.

“We had two deliveries last night and one D&C [treatment for incomplete miscarriage],” says staff nurse Saneesh Rahim, describing her previous12-hour shift. “Fortunately, none were problems for us.”

Patients who are likely to require surgery can be referred to the even more advanced Abbas Institute of Medicine in Muzaffarabad, usually referred to as the AIMS Hospital, or to the district hospital in Mansehra. UNFPA has provided equipment and staff for maternity wards in both hospitals.

“Last month we had 406 deliveries including 76 C-sections,” says Dr. Miriam Zubair at the AIMS Hospital. “Every day we see one or two patients with eclampsia or hypertension. We need more beds and equipment, but patients are being managed well. No one has died.”

Dr. Zubair delivered Perveen’s baby by Caesarean section. Perveen, who lives in a tent, had five children before the earthquake. The three youngest were killed. One was just a day old.

A baby boom continues in the region devastated one year ago. Rebuilding will take years, but health care for many women and their children is already better than before the earthquake.