This report contains important new data about why young people are key to defeating the global HIV/AIDS epidemic, including results from more than 60 new national surveys. It reaffirms that we must accord top priority to making investments in the well-being of young people and to engaging them in the fight against HIV and AIDS.

More than two decades into the epidemic, the vast majority of young people remain uninformed about sex and sexually transmitted infections. Although a majority have heard of AIDS, many do not know how HIV is spread and do not believe they are at risk. Those young people who do know something about HIV often do not protect themselves because they lack the skills, the support or the means to adopt safe behaviours.

Nonetheless, in areas where the spread of HIV/AIDS is subsiding or even declining, it is primarily because young men and women are being given the tools and the incentives to adopt safe behaviours. Young people have demonstrated that they are capable of making responsible choices to protect themselves when provided such support, and that they can educate and motivate others to make safe choices. 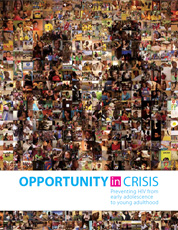