From Conflict and Crisis to Renewal - Generations of Change

The release of the 2010 edition of the State of World Population report coincides with the 10th anniversary of UN Security Council resolution 1325, which recognizes and seeks to address the vulnerability of women and girls to violence during and after armed conflict, and the absence or low level of women’s representation in efforts to prevent war, build peace and restore devastated societies.

The report highlights how women in conflict and post-conflict situations—as well as in emergencies or protracted crises— are faring a decade later. It draws on the experiences of women and girls, men and boys, living in the wake of conflict and other catastrophic disruptions. They speak for themselves about the challenges they face, the ways their communities are coping and becoming more resilient and about ow many of them have become involved in reconstruction and renewal.

The individuals featured in the report are neither statisticians nor demographers. They are rural people living off the land and urbanites trying to survive in broken cities. Many survivors of conflict and natural disasters are now working in their communities to help fellow citizens recover and readjust. The report also documents efforts of traditional elders and religious leaders who strive to comfort the suffering and bring decimated societies back to their cultural roots and principles, so often warped by war, refugee flight, occupation and natural disasters. Local initiatives are healing wounds while rethinking old habits and rules of behavior for a new age. 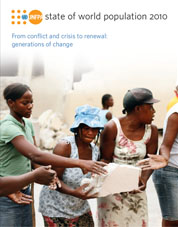