This year's flagship report argues that reproductive health care, including family planning, and gender relations could influence the future course of climate change and affect how humanity adapts to rising seas, worsening storms and severe droughts. Women, especially impoverished women in developing countries, bear the disproportionate burden of climate change, but have so far been largely overlooked in the debate about how to address problems of rising seas, droughts, melting glaciers and extreme weather, the report concludes.

The report draws attention to populations in low-lying coastal areas that are vulnerable to climate change and calls on governments to plan ahead to strengthen risk reduction, preparedness and management of disasters and address the potential displacement of people. Research cited in the report shows that women are more likely than men to die in natural disasters—including those related to extreme weather—with this gap most pronounced where incomes are low and status differences between men and women are high. The international community’s fight against climate change is more likely to be successful if policies, programmes and treaties take into account the needs, rights and potential of women.

The report shows that investments that empower women and girls—particularly education and health—bolster economic development and reduce poverty and have a beneficial impact on climate. Girls with more education, for example, tend to have smaller and healthier families as adults. Women with access to reproductive health services, including family planning, have lower fertility rates that contribute to slower growth in greenhouse-gas emissions in the long run. 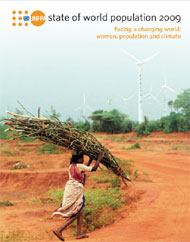