Al-Hassakeh, Syria – Vulnerable civilians were caught in the crossfire as hostilities intensified in north-eastern Syria in recent weeks. “I took out around 160 pieces of shrapnel from the bodies of women and children,” Dr. Yasser Joha told UNFPA from Al-Hol Camp in Al Hassakeh Governorate.

Dr. Joha is a gynaecologist deployed from Damascus to provide reproductive health services in the camp, with support from UNFPA. But as the camp received a massive influx of people, many with serious injuries, he stepped in to provide emergency care.

“The number of injured women and children was overwhelmingly high. We were stunned. I have never seen before in my life what I saw in the camp,” he said.

An escalation in hostilities in Hajin and Al-Baghouz began in September of last year, triggering mass displacements. The crisis caused serious challenges for humanitarian responders, with the number of people leaving Al-Baghouz highly exceeding the expectations of all partners.

More than 63,000 people arrived in Al-Hol Camp between December and the end of March. The vast majority are women and children, according to UN partners. Many walked for days before reaching the camp.

Al-Hol’s current population now stands at over 73,000 people. The influx has slowed since the end of March, but there remain significant concerns, including a high burden on existing health services and limited capacity at secondary health care and trauma facilities.

UNFPA reproductive health teams are reporting cases of sexual violence, psychological trauma, early pregnancy and a range of other concerns.

Pregnant and shot in the mid-section

Last month, Aisha* arrived at the camp eight months pregnant with a gunshot wound through her mid-section.

“Among the huge influx that arrived in the camp, there were hundreds of injured people, and one of those injured was Aisha,” Dr. Joha recalled recently. “She was 28 years old, in her eighth month of pregnancy and injured from a gunshot wound extending from the right side of her waist to the left side.”

Aisha had fled the hostilities in Al-Baghouz. She lost two children during the violence, she explained. “I don’t want to lose my unborn baby as well,” she said.

Her condition looked grim – she had been wounded for three days by the time she reached Dr. Joha. “She said she was not feeling the foetal movement anymore,” he said.

Yet when he performed a sonogram, he was astonished by what he saw. “The baby was still alive! I started to cry when I saw the image,” he recalled.

Through UNFPA’s referral system, Dr. Joha arranged for Aisha to be transferred to the hospital in Al-Hassakeh. She spent three weeks there, recovering from her gunshot wound and safely delivering a baby boy.

Today, Aisha and her new son are healthy and living in the camp.

UNFPA has been working to urgently scale up sexual and reproductive health services, with support from donors including the European Commission, the Government of Australia, the United Kingdom’s Department for International Development, and assistance from the Syria Humanitarian Fund.

Additionally, UNFPA has provided three mobile health teams and one maternity clinic. And in partnership with the Monastery of Saint James the Mutilated, UNFPA has procured a “hospitainer” – a mobile field hospital with a 20-bed capacity, laboratory, and clinics for ophthalmology, orthopaedics, dermatology, internal medicine and paediatrics.

Humanitarian partners are also concerned about the safety of vulnerable women and girls. In response, UNFPA is supporting two women’s and girls’ safe spaces in Al-Hol. There, women can receive health services as well as information about – and protection from – gender-based violence. Three mobile teams are also providing 24-hour support to survivors of violence.

UNFPA has procured 5,000 solar lamps to improve safety at night, when women and girls may face increased risk of physical and sexual violence. And to support the dignity of the large numbers of people who are elderly or living with disabilities, UNFPA has helped to distribute 4,600 adult diapers.

Still, the needs remain enormous, and they are projected to increase. 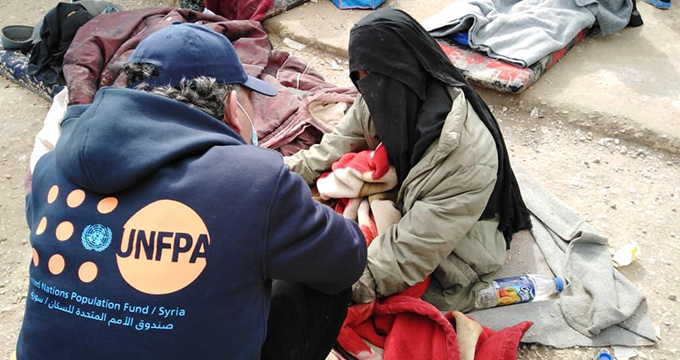