In Turkey, a safe haven for Syrian refugee survivors

ANKARA, Turkey – Tragedy had a way of finding Fatima*. She endured brutal domestic violence during two marriages in Syria. And when the war broke out, a bomb struck her home, injuring her and killing the eldest of her five children.

As the conflict intensified, she was trapped at home when she went into labour with her youngest child. Alone, she gave birth without any help, caring for the newborn by mimicking the care her midwives had provided after her previous deliveries.

Then she cradled the baby all night. It was only in the morning that her husband was able to return home to take them to a hospital.

Desperate to escape the grinding violence, Fatima tried twice to escape over the border to Turkey with her children. She succeeded on her second attempt, travelling to Ankara, where her older brother lived.

Over 3.5 million Syrian refugees are living in Turkey, according to government figures, including 98,000 in Ankara.

There, Fatima was able to start over, free of the violence that had defined her life for so long. “I feel like this city cured me. I’m more optimistic about the future,” she told UNFPA.

As she helped her children adapt to their new home, she found opportunities for herself, as well.

One day, she brought her children to a UNFPA-supported women’s and girls’ safe space to obtain vaccinations. She saw a group of Syrian women leaving a classroom, and learned they were attending a Turkish language class. Fatima immediately signed up to join the course.

Women’s and girls’ safe spaces offer a variety of services tailored to the needs of Syrian refugees and survivors of gender-based violence. They can receive psychosocial support and attend skills-training workshops. They can also receive information on sexual and reproductive health, as well as referrals to health care.

Since 2017, UNFPA has established nearly 40 safe spaces throughout the country, with support from European Union Civil Protection and Humanitarian Aid Operations (ECHO) and the governments of Japan and Sweden.

The safe space gave Fatima a newfound sense of independence.

“I’m so different now – I was an introvert and now I like to meet new people every day,” she said.

Eventually, she was hired to work as a health mediator at the centre. She is one of 166 Syrian women who have been trained to help refugee women and girls receive the services they need.

“The job has so empowered me that I can’t sit still at home, even on weekends, because I always want to do something good,” Fatima said.

The job also allowed her to send her children – who had previously been forced to find work – back to school.

It also emboldened her to stand up to her abusive husband, who stayed behind in Syria. When he demanded that she send her eldest daughter back to Syria to be married off, she refused. The girl remains in school, along with her siblings.

Fatima knows the future has more to offer her daughter than a child marriage. “I want to see my children graduate, see them prosper and live happy lives,” she said. 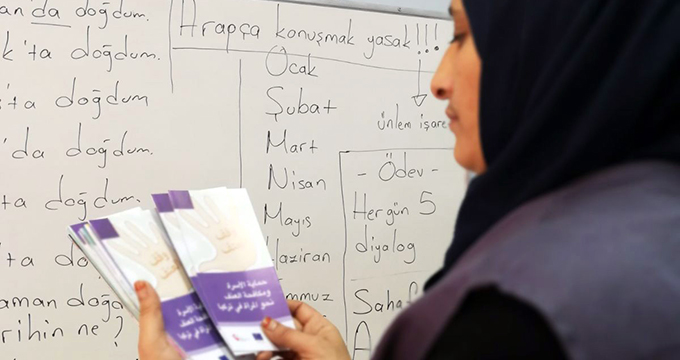 In Turkey, a safe haven for Syrian refugee survivors