BEAUMONT, Haiti – "I was twisting in pain this Friday,” 31-year-old Emmanuella Jeanty told UNFPA, describing her labour pains. She was in Beaumont, a town in southwest Haiti where Hurricane Matthew had left a trail of devastation just one month earlier.

Life was already rough for women and their babies before the hurricane. The country has the highest maternal and child mortality rates in the Western Hemisphere. But conditions have deteriorated sharply since the storm, which completely destroyed the only hospital in the municipality. 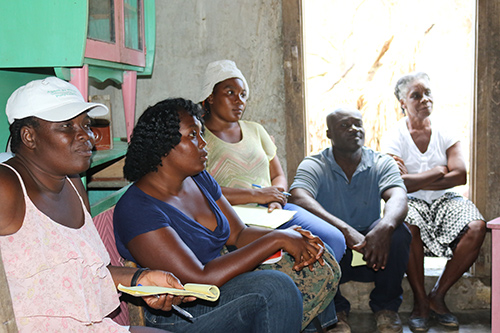 Women attend a meeting about preventing and addressing gender-based violence in Grand´Anse. Conditions for women have deteriorated significantly since the storm struck. © UNFPA/Eddie Wright

¨Now, the situation has worsened,” Ms. Jeanty explained. “There is no hospital. There are not even vaccines to give to babies.¨

But she was fortunate. She happened to be visited by a midwife, Kétia Lizaire, the day she went into labour.

“She took care of me. I gave birth to a baby named Sonaldo, a boy.”

Ms. Lizaire is one of 10 midwives deployed by UNFPA, in coordination with the government, to assist women in the hurricane-devastated departments of Grand'Anse and Nippes.

Ms. Lizaire, a nurse-midwife, provides prenatal consultations at a local dispensary, and also tries to raise awareness of her services so that pregnant women know to call on her when they are in labour.

¨The home birth delivery rate will necessarily increase after the hurricane,” she told UNFPA.

The needs in Beaumont are staggering, and Ms. Lizaire is working around the clock to meet them.

In the last two weeks, in addition to working daily at the dispensary, she has also served aboard three mobile clinics and carried out about 30 home visits. She has also reached out to traditional birth attendants, encouraging them to direct pregnant women to the dispensary for prenatal consultations. 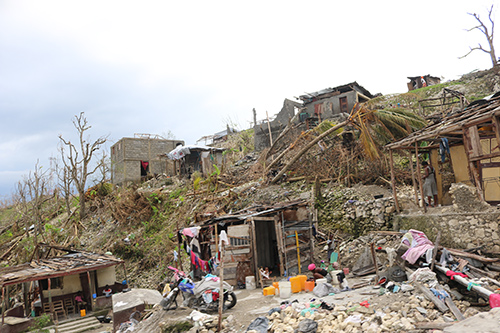 Damage has been extensive throughout southern Haiti. © UNFPA/Eddie Wright

The workload is just as heavy in Jérémie, capital of Grand'Anse. There, Magdala Bourdeau is one of two midwives deployed at the Saint-Antoine Hospital.

"Since November 3, we have carried out several deliveries and received several types of pathologies, such as pre-eclampsia, severe anaemia, high blood pressure and premature pregnancies," Ms. Bourdeau said.

She was tending to a 16-year-old girl who had just given birth to a daughter. The girl’s boyfriend looked lost. "As young people, we were playing, but this is a serious consequence," he said to explain that the pregnancy was unplanned.

Adolescent pregnancies are all too common in Haiti. Some 11 per cent of adolescent girls have at least one child, according to a 2012 survey. And with health services – including family planning consultations and supplies – interrupted by the disaster, rates of unplanned pregnancies may increase in some areas.

Since the hurricane struck, UNFPA has been working with the government and humanitarian community to ensure that the reproductive health needs of more than 546,000 women and girls are addressed. 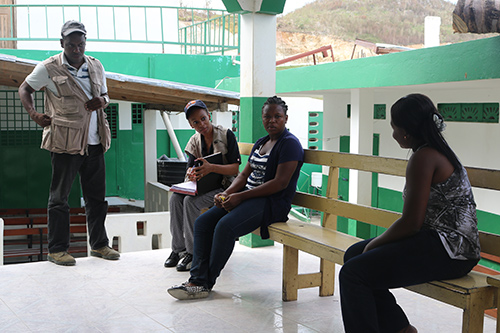 UNFPA estimates nearly 13,650 pregnant women will give birth in the next three months in an environment lacking reproductive health services.

In addition to deploying health workers, UNFPA has provided 261 reproductive health kits, which contain the medicines and supplies needed to meet the needs of 390,000 people in the four worst-hit departments.

But the implementation of UNFPA’s six-month emergency plan is threatened by weak funding, said Marielle Sander, UNFPA’s Representative in Haiti. The plan was only 24 per cent funded as of early November. 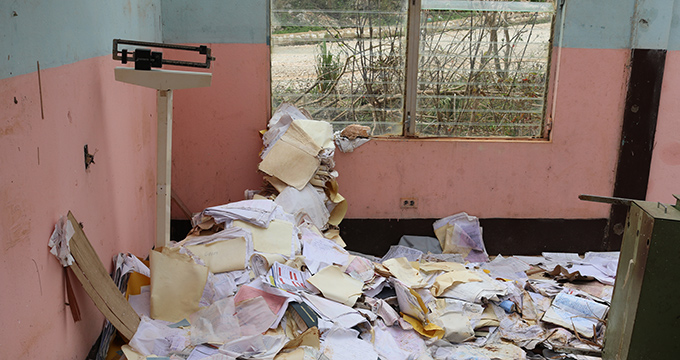