It was an email that ended up not only changing her life, but the lives of thousands of women she had yet to meet.

At the time, she was working as treasurer at Nepal's Women’s Human Rights Protection Network, and the message, which was sent by a colleague, beseeched Sabina and several of her co-workers to pack whatever essential supplies they could carry and head to Dhunche – the district headquarters of Rasuwa, a remote northern-Himalayan region where 83 per cent of households were displaced by the quake and approximately 700 people had died.

Watch this video to learn more about UNFPA's response to sexual and gender-based violence in Nepal. © UNFPA

“We were still in shock, and many of us had lost our own homes and relatives, and were suffering,” says Sabina, who was then living in a tent with her family. “Yet we agreed to go, and when we got there, it was clear that their suffering was much worse than ours. We listened to their woes. We met mothers who had delivered two days before the earthquake and were trapped beneath the rubble of their houses.”

In addition to the desperate need for sexual and reproductive health services among the women, she also noticed that in the camps, which were poorly lit at night and filled with people in crisis and drinking heavily, sexual and gender-based violence (GBV) against women and girls was alarmingly common.

In response, Sabina set up a Female Friendly Space (FFS) in the camp to provide women and children with safe shelter, social support and counselling, with support from UNFPA and WOREC, a local NGO. And today, she is still in Dhunche, hard at work leading the facility and helping it expand.

Monday marks the one year anniversary of the earthquake, which destroyed 1,200 of the nation’s health care facilities – or approximately 84 per cent of those in the country's 14 most-affected districts. But through the work of people like Sabina, Nepal is emerging from the catastrophe with something unexpected: A much stronger infrastructure for supporting the nation’s most vulnerable women and girls. 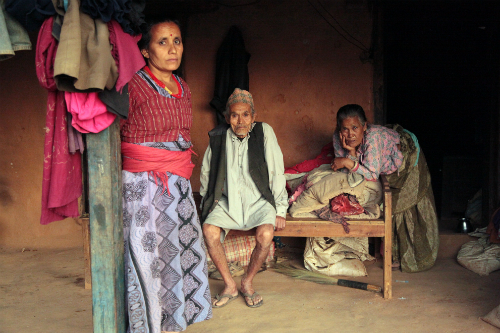 In Nepal, most victims of gender-based violence have suffered in silence, contributing a high suicide rate among the nation's women. © UNFPA Asia/Matthew Taylor

An epidemic of gender-based violence

As in most crises settings, the disaster increased rates of GBV throughout Nepal; however, the abuse was already pervasive before the quake hit, while the resources for women experiencing it, especially in remote regions like Rasuwa, were scarce.

The majority of the women suffered in silence, and nationally, suicide has become the number one cause of death among Nepali women of reproductive age. Sexual and gender-based violence is cited as a major cause of this epidemic.

As part of its earthquake response, UNFPA supported the establishment of 14 FFSs in the 14 districts hardest hit by the disaster, including Rasuwa. Only three of the districts previously had facilities providing GBV services, and over the past year, these 14 facilities have reached more than 108,000 women.

A total of 97 Female Friendly Spaces were set up by different partners in the immediate aftermath of the quake. And while several have since closed, as health facilities re-opened, the success of these programmes has increased the government’s commitment to building additional facilities that provide GBV-related services across the nation. Three have opened in the past year alone. In addition, using the experience of the FFSs, the government has drafted and issued guidelines to help women’s groups throughout the country provide this critical support. 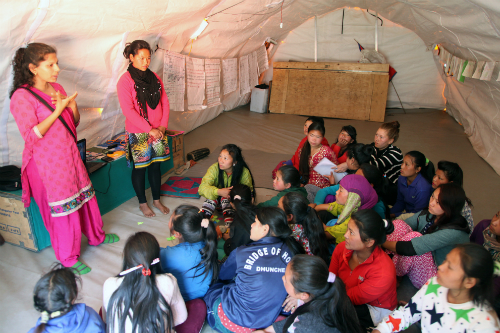 After her home was destroyed by the earthquake, Sarita, age 24, found her way to a camp in Dhunche, with her husband and two children, now ages 3 and 8. Five months later, she attended an outreach session hosted by the Dhunche FFS.

“My husband kept drinking, hitting me and my daughter and smashing up the place,” she says. “But I didn’t know there were places that helped with things like this, so I stayed with him.”

After the session, she immediately took her children to the FSS, where she received shelter and psychosocial counselling services.

Today, Sarita has reunited with her husband, and they are living in a small, rented apartment. Both regularly speak with Sabina, who provides counselling and support, and Sarita reports the abuse has stopped.

And Sabina doesn’t only provide this guidance one-on-one. The Dhunche FFS now holds frequent workshops for men to come in and learn about the effects of GBV, child marriage and other abuses.

“We faced a lot of resistance when we started all this,” says Sabina. “I was threatened, and many men thought we would make their lives more difficult by helping women think differently. But after they come here, they start to understand and to work with us and act better.” 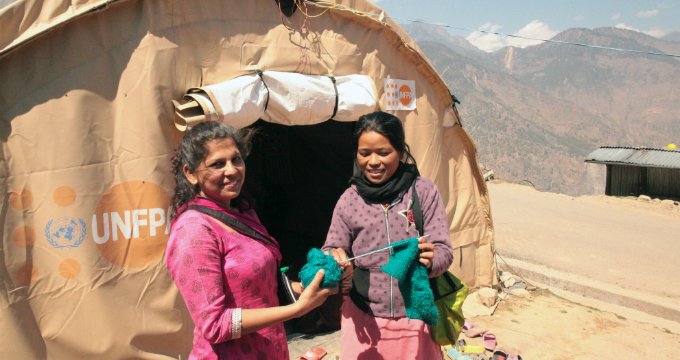