UNFPA, in collaboration with UN Women, organized this international conference to address the global epidemic of violence against women. Hosted by the Government of Turkey, the meeting brought together more than 150 participants from government, civil society, academia and the UN system, including high-level government ministers from Turkey and more than 20 other countries.

At the meeting, UNFPA presented its new Minimum Standards for Prevention and Response to Gender-Based Violence in Emergencies. “These Standards provide practical guidance so that women and girls in conflict areas, in refugee camps, in the aftermath of an earthquake or tsunami or other disaster, can live in safety with access to the services they need, said Babatunde Osotimehin, Executive Director of UNFPA. “We are here in Istanbul to ensure that every woman and girl can live free of violence, and no woman or girl is left behind.” 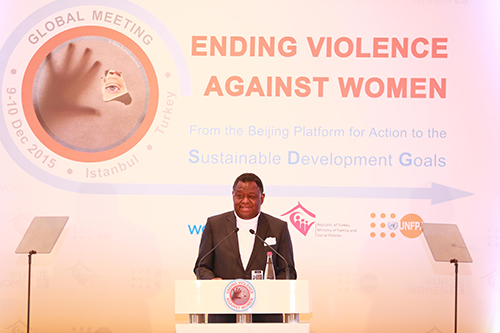 “One woman in three will experience violence during her lifetime, most at the hands of an intimate partner,” said Babatunde Osotimehin, Executive Director of UNFPA. “And in most countries, fewer than four in 10 survivors of gender-based violence seek help. Protecting women’s rights to live in dignity, free from violence, requires our deliberate, urgent and sustained action.”

Throughout the conference, which closed on International Human Rights Day, leaders and participants called for zero tolerance and immediate action to end violence against women. Urging that existing laws protecting women be vigorously enforced, participants emphasized prevention, survivor services, the need for reliable data, and the importance of engaging men and boys to stop violence against women and girls.

The meeting also drew action-oriented commitments from 42 participants to end violence against women.

Commitments made at Global Meeting on Ending Violence against Women