“I have value”: Brave polio survivor overcomes every obstacle

NIAMEY, Niger – Barira Harouna, 16, is unlike any of other girl in her village, Bargaja, in Niger’s Maradi Region. At only 2 years old, she was paralyzed by polio. Two years later, her father died. Her mother soon remarried, leaving Barira with her grandmother. Not long afterward, Barira began begging outside a nearby store to help support their household.

She never enrolled in school and never travelled more than 100 metres from her home. Even getting to the store to beg was a trial. She had to crawl on all fours, using plastic sandals to protect her hands. And because of her disability, she confronted discrimination and derision everywhere she went.

"I watched the world go by,” she said. “I saw kids my age play and run throughout the day."

But in December 2014, everything changed. She enrolled in Ilimin Zama Dunia – known in English as the Action for Adolescent Girls Initiative – a non-formal education programme. 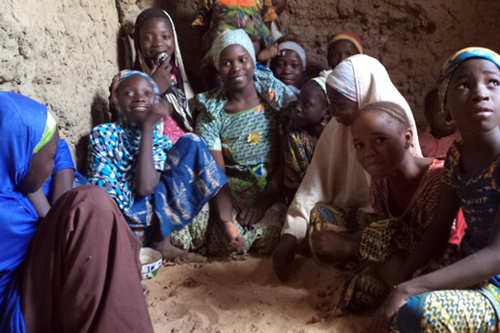 In the Illimin programme, Barira made friends for the first time in her life. Today, she often visits friends, relatives and community members. © UNFPA

Although Barira had been deprived of every opportunity to learn, her Illimin mentor, Rakia Sani, saw that she had great intellect and was powerfully motivated.

"She has a desire to understand and is actively engaged in the learning process. She has the right attitude to achieve her objectives, and pursues them despite the challenges,” Ms. Sani said, adding, “Barira is a fighter."

Barira was one of 10,041adolescents enrolled in the December 2014 session of the programme, which brings together vulnerable girls for eight months of lessons on literacy, reproductive health, hygiene and human rights.

By helping the girls develop self-esteem, the courses are designed to empower the girls to refuse child marriage and avoid adolescent pregnancy. Supported by UNFPA, the Ministry of Population, Women’s Empowerment and Child Protection, and the NGO Lafia Matassa, Illimin aims to reach 250,000 adolescents between 2014 and 2018.

Sixty-four of the 10,041 girls had some type of disability, but only Barira and another girl, in the Tillabery Region, were unable to walk. Others had lower limb disabilities or were blind or could not hear. Some also had intellectual disabilities.

Despite their challenges, all of the 64 girls with disabilities were able to follow the lessons, attend the sessions regularly, and learn about their rights and their worth.

The experience was completely different from anything Barira had ever known. Tentatively, she made friends – the first in her life. 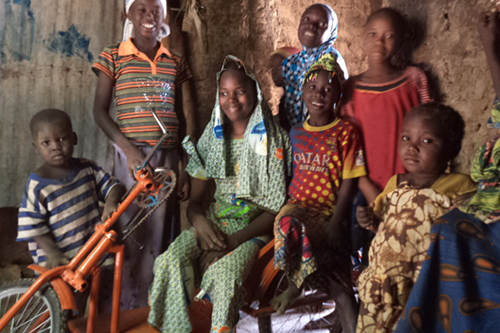 With Barira's new wheelchair, which she can pedal with her hands, she has gained new independence. © UNFPA

Still, she struggled to gain confidence. "My life has no meaning,” she told the mentors, sobbing, four months into the programme. “I am a burden on society. I am worthless because I cannot do anything. "

But by the eighth month, Barira began to feel comfortable. "I started to trust myself, to control my behaviour with others, and I felt re-valued. I discovered that I have talents and that I can be useful to myself, to my grandmother and even to society.”

A door to independence

A month before the end of the programme, an Illimin facilitator told Barira she would be receiving a wheelchair, provided by the UNFPA staff based in Maradi.

"When I broke the news to my grandmother, she jumped and danced with joy,” Barira said.

A few days later, on 13 June, she received the wheelchair at a ceremony attended by all the villagers. Together, Illumin staff and the village head placed it outside the door of her Barira’s home.

The wheelchair has three wheels, and is designed to let Barira navigate and accelerate with her hands. "When I took the first pedal strokes, I was filled with a sense of joy and wellness. The feelings of this new life have let me forget the past," she said.

Now, her life has completely changed. She has the confidence and the means to travel around the village and meet new people. "Today, I attend the various ceremonies in the village, and I visit relatives and friends," she told UNFPA.

“My disability is not an end in itself,” she said, “since I have value." 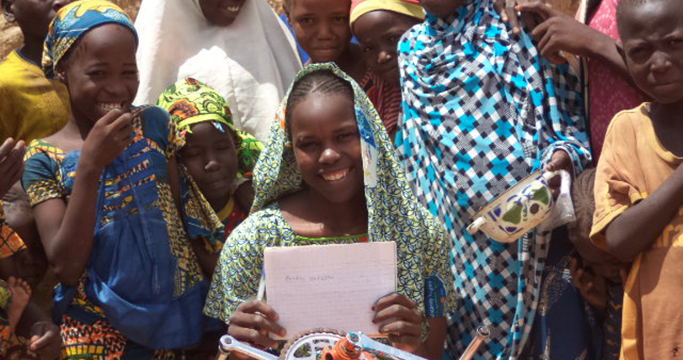 “I have value”: Brave polio survivor overcomes every obstacle