ZAATARI/MAFRAQ, Jordan – Four decades ago in Syria, a medical mistake left Fatima deaf. She spent years overcoming her disability – only to find herself uprooted by the violence in her home country.

Three years ago, she and her family fled to Zaatari, a sprawling Jordanian refugee camp that houses more than 80,000 people. Life in exile proved complicated for Fatima, now 44. Even living among thousands of other refugees, she felt isolated.

Unable to speak or socialize with other refugees, she fell into a depression.

Throughout her childhood, Fatima struggled to cope with her hearing impairment. She felt alienated from her peers, and her parents had difficulty handling her special needs. Discriminatory beliefs about disabled people were commonplace.

But with hard work, the family learned sign language, and, when Fatima was 12, her parents discovered she had a gift for art.

“I started to do all my siblings’ homework for their art classes,” Fatima told UNFPA through an interpreter.

She learned to lip read, and with help from her elder sister Heyam, she began teaching her siblings and neighbours to draw. Her family encouraged her to develop her abilities, and she soon became skilled at embroidery and other crafts.

She was able to sell her work, and eventually became well-known in the community for her talents.

But when her family was forced to flee Syria, Fatima’s life was again thrown into upheaval.

Fatima’s mother and her sister, Amal, tried to ensure she did not miss any importance services or assistance. Still, Fatima encountered the same negative attitudes and isolation she had experienced in childhood.

“At first, I was really frustrated by the reaction of the people and their way of treating me [because] I’m with special needs,” Fatima said.

After arriving in Zaatari, Fatima began to attend information sessions and services at a women’s centre operated by the Institute of Family Health, with support from UNFPA. The centre is a safe place for refugee women and girls to receive counselling, health and human rights information, and other assistance.

She participated in some of the facility’s recreation classes, making handicrafts and picking up new skills. The staff quickly recognized her talent.

They asked Fatima to join the centre as a volunteer. Since March 2013, Fatima has taught sewing, illustration and painting classes, with assistance from a colleague who knows sign language. She receives a small stipend for her service.

“The UNFPA-supported women’s centre discovered and believed in my talents and encouraged me to improve those skills,” Fatima said.

She has since settled into life at the camp.

Last year, she got married. Her husband respects her a lot, she says, and she gets along well with his five children.

Her schedule is now full with family activities, volunteering at the women’s centre, and developing new artwork and crafts.

“I got a new, great opportunity to be happy again,” Fatima told UNFPA, sitting at a table covered in her sketches and embroidery.

“Now, I feel safe and happy,” she added. 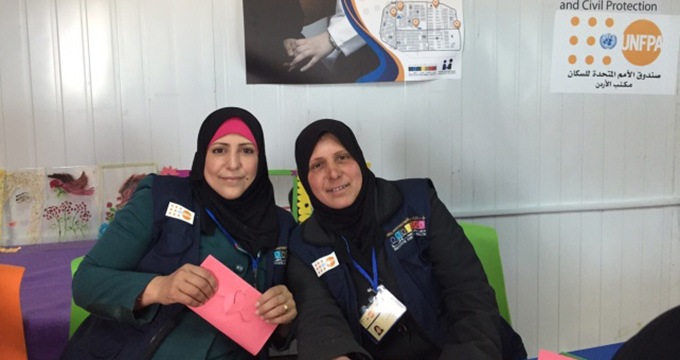