Some 3,995 people are living in evacuation centres, and 13 fatalities have been confirmed following the catastrophic 13 March storm according to the most recent UN figures.

UNFPA estimates some 6,700 women in the country are pregnant, and some 900 will face dangerous complications in the next nine months.

The storm left substantial damage to medical facilities, and continuing problems with telecommunications have left women in the dark about which services are still accessible, and where.

UNFPA is working with Ministry of Health to mobilize health outreach to pregnant women and new mothers.

"There is a lot of demand for family planning services, and because antenatal clinics are closed, we know that these will be the first areas to address," said UNFPA specialist Claire Davies on Thursday.

"The main hospital is open and running – there have been 41 births since the cyclone, eight overnight, though with skeletal staff,” she added.

“We have received reports of people asking for contraceptives, especially condoms, as majority of community clinics remain shut."

In the aftermath of emergencies, the reproductive health needs of survivors are often overlooked. But without access to maternal health services, pregnant women in emergencies face increased risks, and women without access to family planning are exposed to unwanted pregnancies in perilous conditions.

Women and young people in crisis situations are also more vulnerable to sexual violence, exploitation and HIV transmission. The hygiene needs of women and girls are also often neglected.

In Tanna, one of the five provinces outside the main island of Efate, preliminary assessments confirm substantial damage to maternity and paediatrics wards. Similar reports are expected from the other provinces.

Because of the extent of the damage, UNFPA anticipates there will be a significant increase in reproductive health needs in the coming months.

So far, two midwives, of the eight requested by the Government of Vanuatu, have arrived.

"For an inclusive recovery, it is imperative that women and girls are not forgotten in the international humanitarian response," said UNFPA Pacific Representative and Director Laurent Zessler. 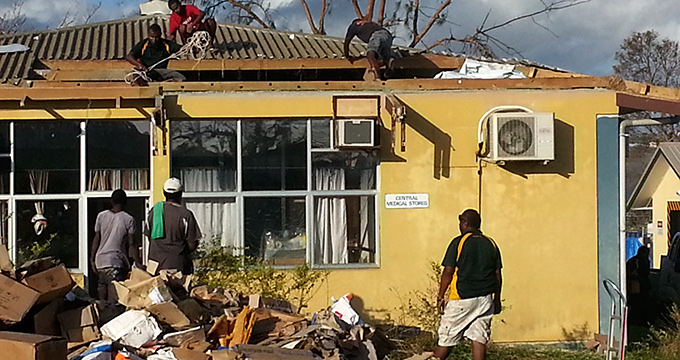