LIMA, Peru – "I became pregnant at 14 years old,” Angie told UNFPA. Now 19, she lives with her son in a low-income area on the margins of Peru’s capital, Lima, in the densely populated Villa El Salvador District.

Angie recalls that she did not have the information she needed to avoid pregnancy. “I did not know about contraceptive methods. At high school, I still had not been given talks.”

Jazmin, another young woman in Villa El Salvador District, says she also became pregnant at a young age. She became a mother at 17.

Her only exposure to family planning information had come from her peers. “I did not have information at school. I did not talk about it with my mother either. I felt very embarrassed," she said.

"I swear I did not even know what the pills were,” she said, referring to oral contraceptives.

A health and human rights concern

Around the world, teen pregnancy is a serious health and human rights concern.

Girls are highly vulnerable to the health consequences of pregnancy. Globally, pregnancy-related complications are the leading cause of death among adolescent girls.

Adolescent pregnancy also triggers inequalities that persist into adult life. Pregnancy often drives girls from school, depriving them of their right to education and limiting their future potential.

In Peru, four girls under the age of 15 give birth each day, according to UNFPA estimates based on National Identification Records. Ninety-nine per cent of these girls live in poverty, and 4 out of 10 will leave school because of pregnancy.

Angie’s and Jazmin’s experiences bear this out.

Angie’s home life was unstable. She went through more than seven high schools, and was torn between her parents in a messy custody dispute. “I was like a toy, I went from one side to the other,” she said.

Both Angie and Jazmin were forced to drop out of school to care for their sons.

Today, Jazmin and her partner struggle to make ends meet. “I have to afford the backpack, the notebook, the supplies, the food, the lunch box... There are many things. I will not have anything for Christmas," she told UNFPA.

Angie and Jazmin are far from alone. Thousands of Peruvian young people lack access to the information and health care required to avoid unintended pregnancies.

In 2013, UNFPA worked with the Ministry of Health on a plan to prevent teen pregnancies. The plan called for comprehensive sexuality education and youth-friendly health services, including access to family planning information and services.

Yet teen pregnancy rates have remained more or less constant, with large disparities throughout the country. Rates of adolescent pregnancy are much higher among marginalized groups in the Amazon rainforest regions than in the capital, for example.

Adolescents in many areas also continued to face legal barriers to contraceptive access. Finally, in 2016, with advocacy and technical assistance from UNFPA, the government passed new regulations removing these legal barriers.

Still, to implement these changes, investments are needed – particularly in training for health providers and teachers.

But there is hope for a better future for Peruvian youth.

Angie, too, has hope. She is dreaming of a better life.

"My goal is to study law, as my dad did,” she said. “My mother told me that for that I need a strong character, and I feel that I have it.” 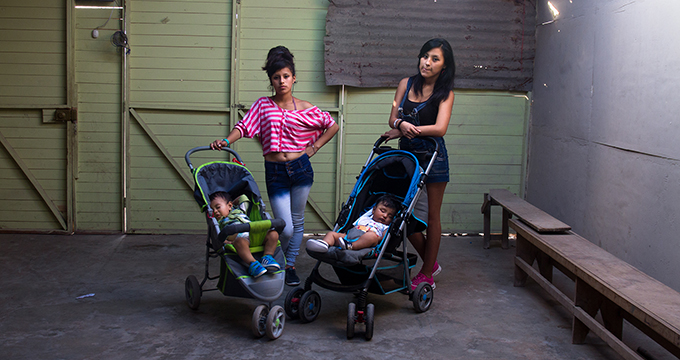