MESSOBO, Ethiopia — On the day of her graduation from the Berhane Hewan project, Yideneku Chanie got up especially early. After attending 18 months of classes at the project, she was awarded a certificate, along with a pregnant ewe, for successfully completing her education. 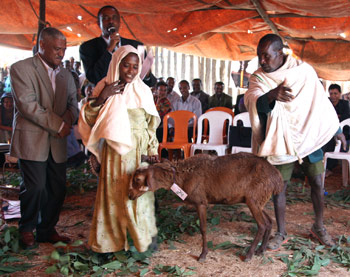 “I like Berhane Hewan so much. It has saved me from being married off,” said 12-year-old Yideneku, her dark eyes shining. Around her, hundreds of girls and their families stood around the hot, dirt-packed common area of the Mosobo Kebele Association, commenting and discussing the graduation ceremony they had just witnessed.

Amharic for ‘light of eve’, Berhane Hewan is designed to impart to adolescent girls in rural areas the knowledge, skills and resources they need to avoid early marriage, with additional support to girls who are already married. The project is funded by UNFPA, the United Nations Population Fund, through the Nike Foundation, with technical support from the Population Council. The Ministry of Youth and Sports and the Amhara Region Youth and Sports Bureau implement the project.

The project was developed through extensive consultation with the community in Mosobo, a neighbourhood, or kebele, in Yilimana Densa, some 40 kilometres north of the Amhara region capital Bahir Dar. It incorporates lessons learned from previous programmes to end early marriage and provides families with opportunities to stop the practice.

“One of the prominent factors that has contributed to the appalling reproductive health situation of Ethiopian women is the traditional practice of early marriage,” said Ayalew Gobezie, President of the Amhara Regional State, in his speech to the community. In Ethiopia, 850 women die per 100,000 live births.

The impact of early marriage is tremendous on women and families worldwide. Besides the number of health issues associated to early marriage such as fistula or maternal death, child brides are typically deprived of an education, and thus condemned to a lifetime of dependence on her husband and his family.

One of the factors that has contributed to the appalling reproductive health situation is the traditional practice of early marriage."

In the Amhara region of Ethiopia where the Berhane Hewan project is based, rates of child marriage are among the highest in the world. Half of all girls in this region are married before their 15th birthday. Of this total, most had never met their husbands at the time of marriage, according to a recent survey, and were subjected to forced sex. Even worse, most married girls interviewed in the survey reported they had not started menstruating when they had sex for the first time.

“Besides a violation of their human rights, the practice is in violation of Ethiopian law, which states that marriage is legal only between consenting adults, who have, at minimum reached the age of 18 years,” said Monique Rakotomala, Country director of UNFPA.

The practice will only change when Ethiopian society begins to value women as equal players in the country’s social and economic development. But in the meantime, Berhane Hewan buys time for hundreds of girls, placing them in a learning programmes until they reach the legal age for marriage.

Besides Yideneku, nearly 650 other adolescent girls have so far received their Berhane Hewan diplomas. Set up as a mentoring scheme, the project brings together married and unmarried girls aged 10 to 19. The girls take part in non-formal and life skills education led by adult female mentors, or participate in weekly married girls clubs. Unmarried girls meet five times a week and married girls meet once a week.

With school materials provided by the project, girls and young women learn functional literacy, life skills, and reproductive health. It takes six months to complete an educational cycle and most girls are ready to move on to formal schooling after completing the 18 months schooling, after which they enter grade 4. So far 84 are attending primary school in the small town of Adet, about an hour’s walk from Mosobo.

“Previously, since our parents did not have enough means to buy us educational materials like pen and exercise books, we did not get education. Our fate used to be being married early. But since the project started this problem has been solved,” said Yideneku.

As part of the programme, the project holds monthly community dialogues, where members of the kebele can discuss topics related to the well-being of their daughters, including reproductive health, HIV and AIDS, and household management issues. The discussions are similar to those held by the girls themselves.

“The real difference here is that the families of the girls are included in both the planning and the execution,” said Dr. Tekleab Mekbib of the Population Council. “This gives people ownership of the process, and a measure of pride and the success of the project.” 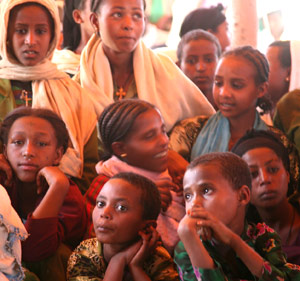 The families were taught skills such as the construction of improved stoves and household management, for example. They also get family planning counselling and services free of charge at the local health post. In addition, families were given the chance to cultivate vegetables for consumption and sale, and they received support to engage in small-scale poultry farming to supplement their income.

As a sign of their appreciation for the project, the community took the initiative to build four houses for the project. It also actively participated in the registration of the students. Over 700 girls joined Berhane Hewan in the first two months – roughly 40 per cent of eligible girls. Seventy-seven percent of the participants have never married, 20 per cent are married, and about 3 per cent are divorced.

The assistance of husbands is enlisted as well. To alleviate the workload of the married girls and help the community, improved stoves have been constructed and water wells have been dug in some selected sites in the locality. This helps the girls to have access to clean water nearby and gives them the time to participate in the discussions in the girls’ clubs.

“Project like this are urgent in Ethiopia, and can put a halt to much child abuse in the country’s urban centres,” said Monique Rakotomalala.

So far, not a single underage girl was married in the past year in Mosobo. This was partially due to a firm commitment by local authorities to curb the practice. Working closely with the district administration, as well as the police and the district prosecutor, the local authorities brought to justice three families who tried to marry off their children. The marriages were annulled.

Scheduled to be expanded to another 10 kebeles, the commitment by national leaders is also crucial for the success of the programme. The graduation ceremony was overwhelming: In addition to community members and graduating girls, it included senior officials of the federal and regional government – including Deputy Speaker of the Ethiopian Parliament, the Minister of Youth and Sports, State Minister of the Ministry of Women’s Affairs, and the President of the Amhara Regional State.

Yideneku’s mother sends all her daughters to school. She always blames her own parents for not sending her to school, and she is happy that her daughters will have more opportunities.

As for Yideneku, now that she has successfully completed her non-formal education, she cannot wait to attend a formal school. She dreams of becoming a medical doctor one day.