Regent, SIERRA LEONE – “I saw the rocks from the hill fly up into the air,” Martha Kamara, 28, told UNFPA, describing the floods and landslides that devastated 13 areas in Freetown, Sierra Leone’s capital, last month.

Ms. Kamara is eight months pregnant from the Motormeh Community in Regent. She and two of her daughters, ages 9 and 5, survived the disaster. But her three-year-old daughter and brother both died.

“When the rescue team pulled my brother out from the mud, they pulled out his unclothed corpse and some of his body parts,” Ms. Kamara said.

Over 500 deaths have been confirmed, and 810 people are missing, according to a 31 August report from the United Nations. Some 1,900 households were affected, the government has reported, including hundreds of pregnant and breastfeeding women, like Ms. Kamara, who have health and hygiene needs that can easily be overlooked in a disaster setting.

The day after the disaster, the UNFPA-supported Regent Community Health Centre established a temporary health post at the Saio Elementary School, which became a displacement site for survivors.

The health staff were themselves affected by the flooding and landslides. “We lost our laboratory technician and state-enrolled community health nurse, along with their families,” said Jenebah Sesay, one of the community health officers managing the post.

Pregnant and post-partum women were among those to arrive in the immediate aftermath of the crisis. “We know of eight pregnant women in the Regent community who survived the landslide,” said Ms. Sesay in the days after the disaster. Many of the survivors suffered from skeletal and muscular pain, she added.

Ms. Kamara was among those in need of urgent attention.

After she collapsed, she and her daughters were brought by rescue personnel to the Regent health centre.

“Martha was placed on an IV drip and received a full examination since she is eight months pregnant and as she was in a stressful state,” said Aisha Conteh, a health officer at the centre.

Ms. Kamara was provided with maternal health care and discharged. 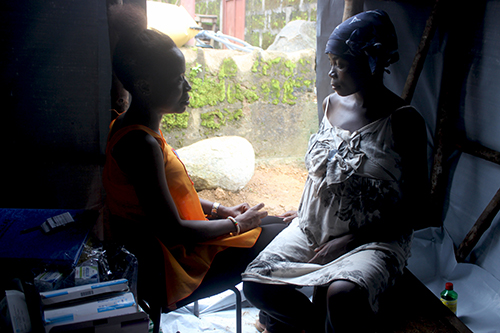 In shock and homeless

But Ms. Kamara’s difficulties were only beginning. The disaster had left her family homeless.

“We were hungry, tired and still in shock from what had just happened,” Ms. Kamara said. “I lost everything. I had bought all the things for the baby before the disaster. It’s all gone.”

After she was discharged, the family able to find lodging in the corridor of a friend’s one-room home. Every day, Ms. Kamara and her two surviving daughters travel to Saio Elementary School to receive food, water and other assistance. In the evening, they return to the friend’s home.

UNFPA is helping to meet the needs of women and girls affected by the disaster. With its partners, including the Planned Parenthood Association of Sierra Leone, UNFPA has reached 83 pregnant women with antenatal care and ultrasound scans.

UNFPA has also distributed over 1,000 dignity kits, which contain essential personal items such as sanitary pads, underwear, cloth wraps, soap, toothbrushes, a torch, as well as family planning brochures. And pregnant women, including Ms. Kamara, have been reached with “mama and baby kits,” which contain baby clothes, toiletries, diapers, socks and cloth wraps. 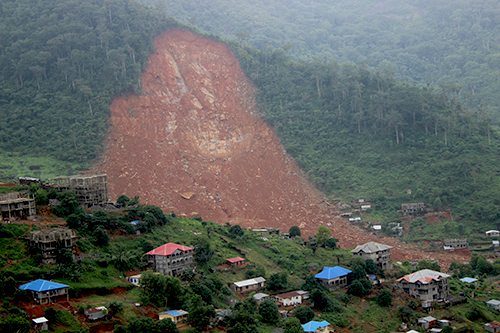 But as the community works towards recovery, the needs remain significant.

“Trauma is a major issue for those affected,” said the World Health Organization in a September report on the disaster. There are protection needs, as well, because the risk of gender-based violence increases in humanitarian settings.

To address these needs, UNFPA has trained 54 social workers, partners and family support officers, who will man six protection desks in affected communities. The family support units are attached to local police stations. 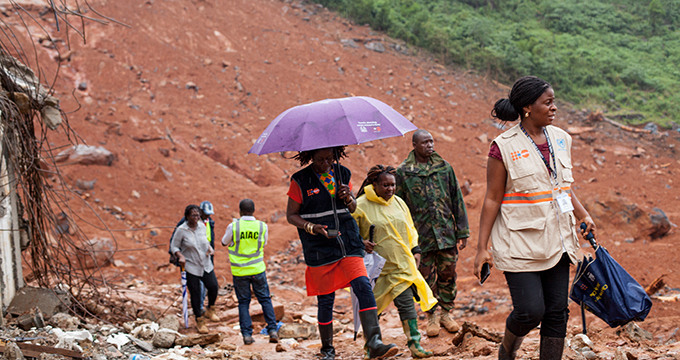