Coordinated and systematic efforts are needed to end female genital mutilation, engaging whole communities and focussing on human rights and gender equality. The sexual and reproductive health needs of women and girls who are subjected to the practice and its consequences must be urgently addressed.

UNFPA, together with UNICEF, leads the Joint Programme on the Elimination of Female Genital Mutilation, the largest global programme to accelerate the elimination of this harmful practice. The programme currently focuses on 17 countries as well as supporting regional and global initiatives.

What is female genital mutilation?

Female genital mutilation refers to all procedures involving partial or total removal of the external female genitalia, or other injury to the female genital organs for non-medical reasons. It is a deeply entrenched – and deeply damaging – social and cultural norm in many places.

The practice can cause short- and long-term health complications including chronic pain, infections, increased risk of HIV transmission, anxiety and depression, birth complications, infertility and, in the worst cases, death. It is internationally recognized as an extreme violation of the rights of women and girls.

Female genital mutilation violates human rights principles and standards – including the principles of equality and non-discrimination on the basis of sex, the right to freedom from torture or cruel, inhuman or degrading punishment, the right to the highest attainable standard of health, the rights of the child, the right to physical and mental integrity, and even the right to life.

In 2012, the United Nations General Assembly unanimously adopted the first-ever resolution against female genital mutilation, calling for intensified global efforts to eliminate the practice. In 2015, female genital mutilation was included in the Sustainable Development Goals under Target 5.3, which calls for the elimination of all harmful practices.

Yet it remains widespread. In 2023, UNFPA estimates that nearly 4.3 million girls are at risk of female genital mutilation. Population growth means that this number is projected to rise to 4.6 million in the year 2030, unless efforts to end it are intensified. If female genital mutilation continues at current rates, an estimated 68 million girls will be subjected to this practice between 2015 and 2030 in 25 countries where it is routinely practised and where relevant data are available.

In every society where it is practiced, female genital mutilation is a manifestation of deeply entrenched gender inequality. It persists for many reasons. In some societies, for example, it is considered a rite of passage. In others, it is seen as a prerequisite for marriage. In some communities – whether Christian, Jewish, Muslim – the practice may even be attributed to religious beliefs.

The decision to collectively abandon it requires a process in which communities are educated about female genital mutilation, and then discuss, reflect and reach consensus on the issue. The health and human rights aspects should feature prominently in these dialogues, and local and grassroots organizations should play an important role in raising awareness and educating communities.

Female genital mutilation can never be “safe” and there is no medical justification for the practice. Even when performed in a sterile environment by a health-care professional, there can be serious consequences immediately and later in life. Medicalized female genital mutilation gives a false sense of security. Trained health professionals who perform it are violating girls’ and women’s rights to life, to physical integrity and to health. They are also violating the fundamental medical mandate to "do no harm".

UNFPA is working to mobilize health workers, including midwives, to resist social pressure to perform female genital mutilation and to become advocates for prevention and protection in the communities they serve.

In 2008, UNFPA and UNICEF established the Joint Programme on the Elimination of FGM, the largest global programme to accelerate elimination  of the practice and to provide care for its consequences. This programme works at the community, national, regional and global levels to raise awareness of the harms caused by female genital mutilation and to empower communities, women and girls to make the decision to abandon it.

Now in its fourth phase of implementation, spanning 2022 to 2030, the Joint Programme confirms the commitment of UNFPA and partners to end this harmful practice by 2030. Since its inception in 2008, it has helped more than 6  million girls and women receive prevention, protection and care services related to FGM. Some 45   million people in more than 34,659  communities in 15 countries with high female genital mutilation prevalence have made public declarations to abandon it. And the Joint Programme helped 17 governments set up national response mechanisms. Following intensive capacity development initiatives, there have been 1,574  cases of legal enforcement to date.

UNFPA also helps strengthen health services to prevent female genital mutilation and treat the complications it can cause. UNFPA works with civil society organizations that engage in community-led education and dialogue sessions on the health and human rights aspects of the practice. The Fund works with religious and traditional leaders to de-link female genital mutilation from religion and generate support for its abandonment. UNFPA also works with the media to foster dialogue about the practice and to change perceptions of girls who remain uncut.

With the support of UNFPA and partners, including communities, activists, feminist groups, religious leaders, medical doctors, governments, policy makers and community-based organizations, female genital mutilation – including in Egypt, Nigeria, Sudan and The Gambia – and developed national policies to achieve its elimination. 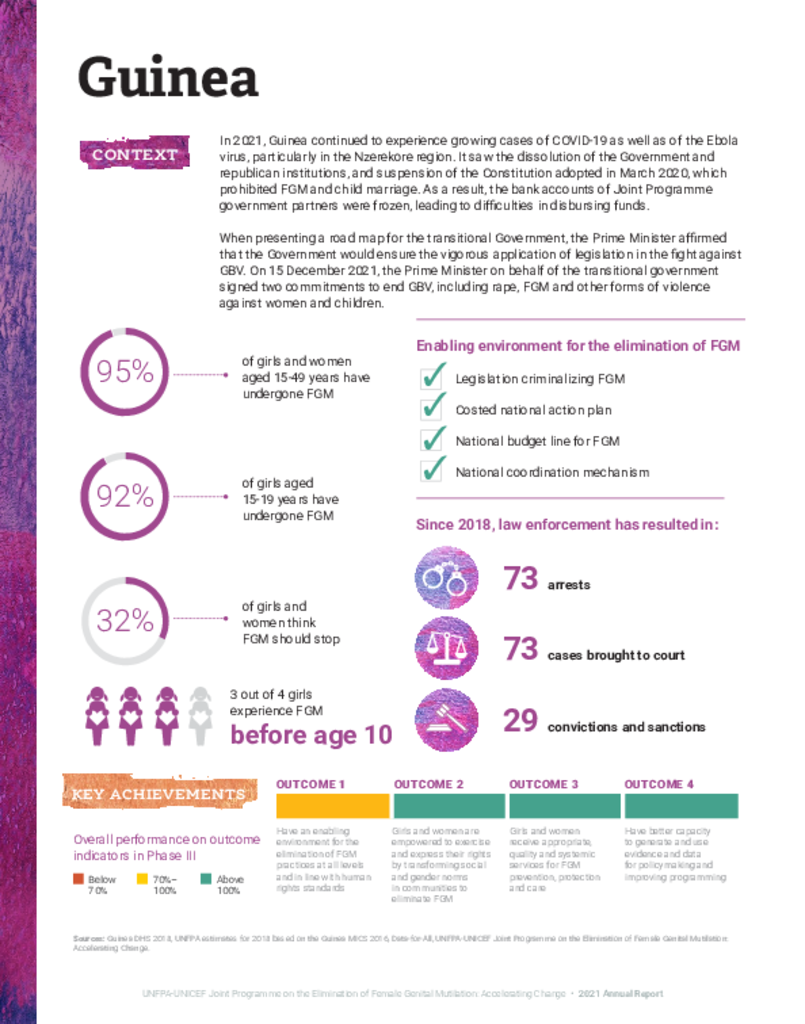 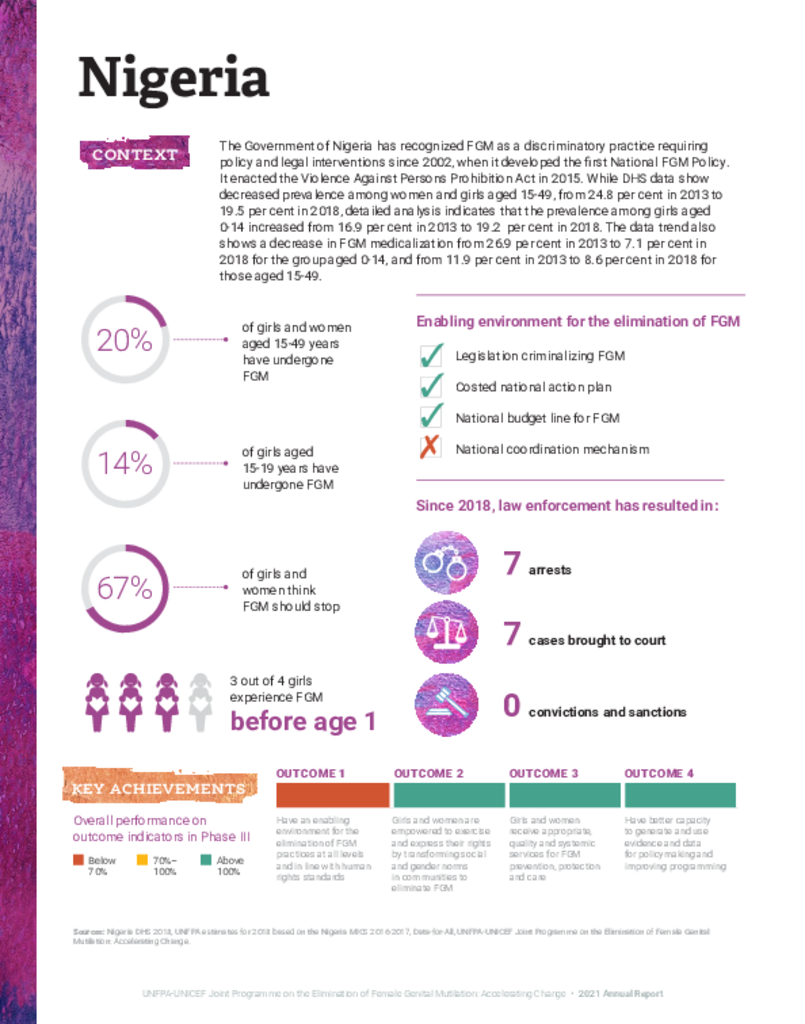 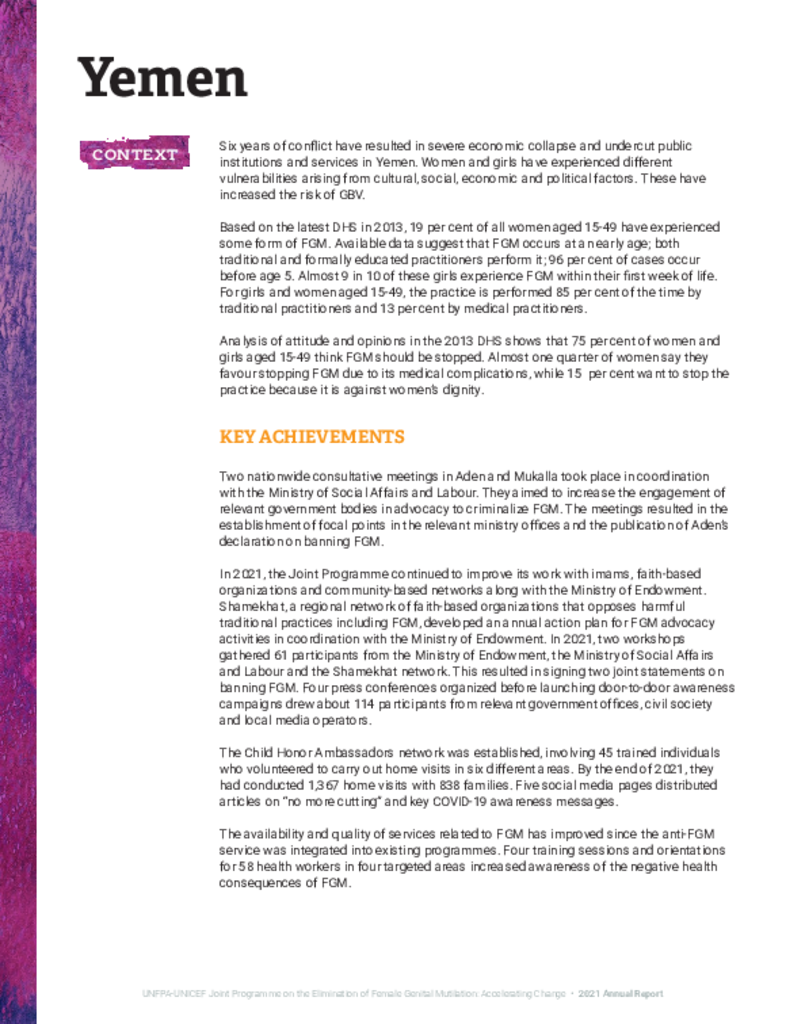 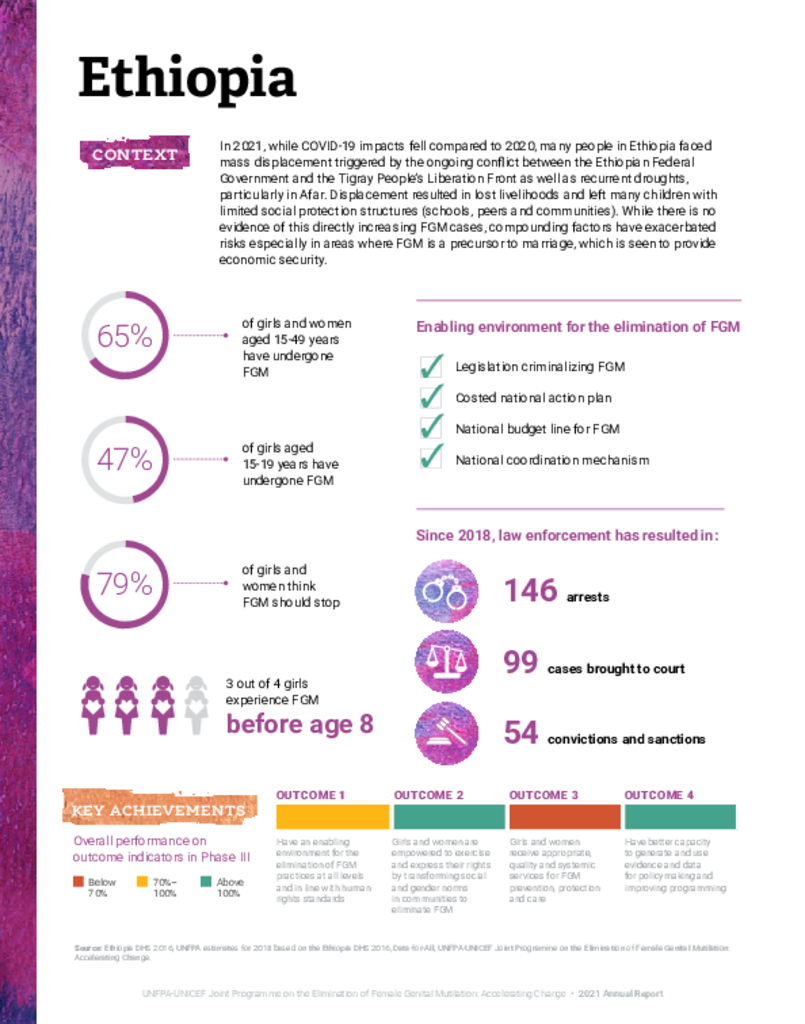