The 2018 conference will serve as an important platform for (1) keeping ICPD issues alive and within global mainstream parliamentary discourse, (2) taking stock of the progress of the ICPD Programme implementation and (3) strategically positioning population dynamics within the 2030 Agenda for Sustainable Development.

IPCI aims to produce a forward-looking declaration and action plan that fosters understanding of and consensus around the urgency to address current political discourse on sexual and reproductive health and rights.

Canadian Association of Parliamentarians on Population and Development 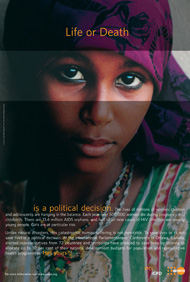 "Life or death is a political decision."