The country generally experienced an uneasy calm during the festive season but some areas had various types of disturbances. Intermittent fighting was reported in the hotspot States among armed groups, especially in Unity and Upper Nile States. The warring parties continue accusing each other of triggering the recent clashes that erupted in Unity and Upper Nile states. The Intergovernmental Authority on Development (IGAD) has strongly condemned the renewed violence and appeal to the belligerents for an immediate ceasefire. Due to the current situation the IGAD adjourned the peace talks in Addis Ababa until mid-January. Following the clashes that erupted between SPLA and SPLA-IO in Unity State, UNOCHA estimated that 2,036 people had newly arrived at the Bentiu PoC site during the last week and are awaiting verification. 351 new people were also verified and registered in Melut.

There has been an increase in the number of ambushes on the roads and tensions re-ignited in Nasir, where small arms fire and RPGs were reported. According to media reports, inter-communal violence in Lakes State led to 44 fatalities thus movement along Rumbek-Yirol Road was restricted by UNDSS until further notice. 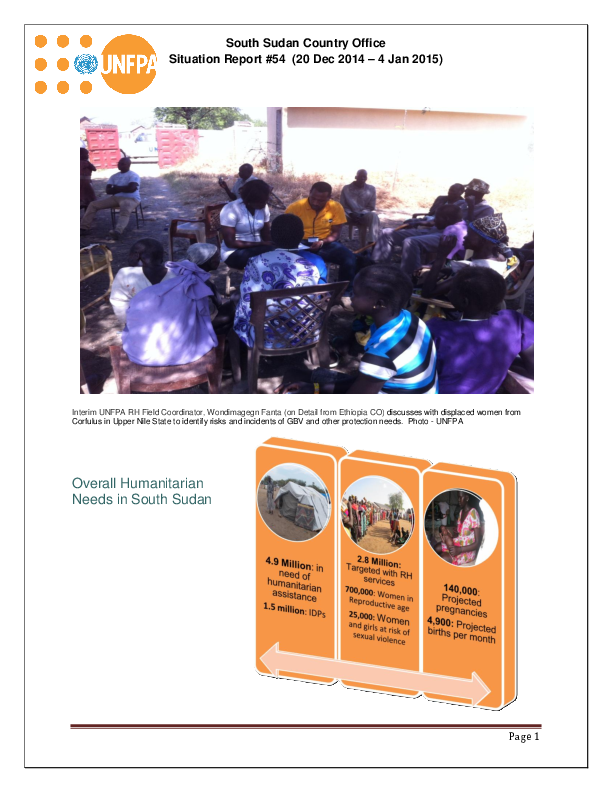