The phenomenon of ‘missing women’  is well-established in many Asian countries, including India.  In India, while the 2001 census showed a slight increase in the overall population sex ratio, which rose from 927 females per 1000 males in 1991 to 933 in 2001, the proportion of girls to boys as captured by the sex ratio of those 0-6 has continued to decline, falling from 976 in 1961 to 927 in 2001. The sex ratio at birth has also declined sharply. Estimates based on the National Family Health Surveys (NFHS) and Sample Registration Surveys (SRS) indicate that this ratio has fallen from 943 in the 1980s to 876 in 2001-03. A substantial proportion of this anomaly may be attributed to the differential survival of girls and boys in the 0-6 age group due to daughter elimination in the form of sex selection, infanticide and neglect (see Sen, 1990; Jha et al., 2006; Srinivasan and Bedi, 2008). While several North Indian states have a long history of daughter elimination, it is a relatively recent phenomenon in the south Indian state of Tamil Nadu. Nevertheless, the state government and NGOs have been active in collecting data to track gender differences in survival and have pioneered programmes to prevent daughter elimination, some of which have been adopted by other states (Girl Child Protection Scheme) or have been considered for introduction on an allIndia basis (Cradle Baby Scheme). Programmes to prevent daughter elimination were first launched in Tamil Nadu in 1992 and after a first phase of interventions between 1992 and 1996, a second phase characterized by a sharp increase in intervention intensity was launched in May. 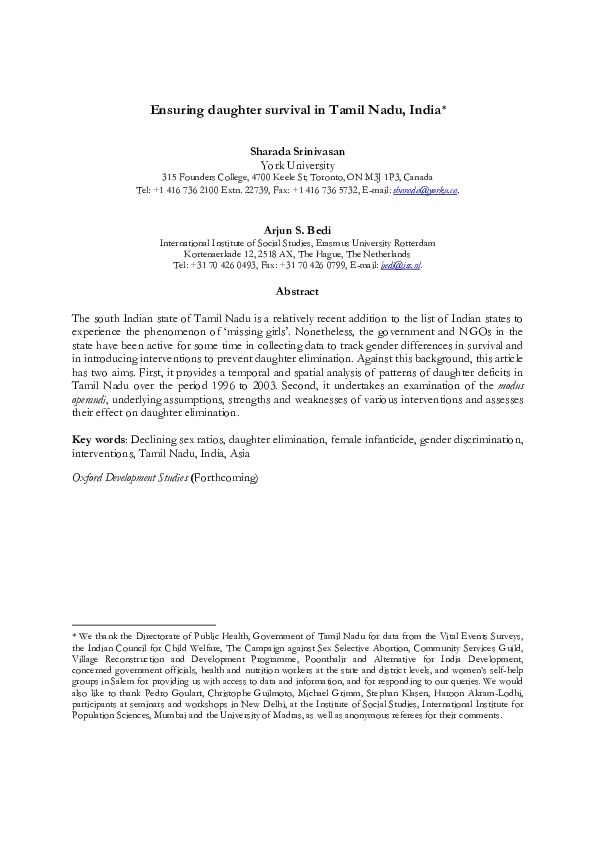