FIJI, South Pacific – When Bobby Shing’s grandmother died in 2001, it was a turning point. The musician from Aneityum, one of the most remote islands of Vanuatu, was just a child at the time, but he had already fallen into substance abuse. The loss of his grandmother made him realize he wanted to do more with his life. Now 23 years old, he runs a UNFPA-supported music programme that reaches out to vulnerable young people.

Aneityum is the farthest island from Vanuatu’s capital, Port Vila. Government services are irregular, but cruise ships frequent the area, bringing with them the lure of a faraway lifestyle. At the same time, the island is steeped in tradition, which discourages people from discussing sexual and reproductive health and the other issues young people grapple with.

Reluctance to address these issues has had a direct effect on the health and well-being of the country’s youth. Vanuatu has one of the highest adolescent fertility rates in the Asia and Pacific Region. Rates of sexually transmitted infections are also very high, with a large proportion of young people engaging in unsafe sex practices.

“We could see that it was very difficult to convince young people just by talking, but we also knew that young people in my community really like music,” Mr. Shing said recently. 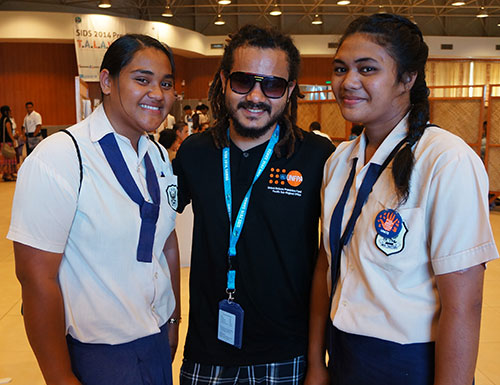 Through the club, young people create and listen to music addressing issues like sexual and reproductive health.

“Sometimes we think we are just listening to music, but the words are being recorded in our minds,” he said.

The club members are also peer educators, who reach out to other young people about these issues.

“We cannot really see it on a big scale right now, but for the young people, I have seen very big change in their lives, especially their personal lives. They are beginning to become interested again in community life and recognizing that they are capable of making things better for all of us.”

As much as 70 per cent of the island’s population is under age 29. Investing in their skills, health and opportunities will be crucial to the island’s – and country’s – future. Yet there are enormous logistical and financial barriers to providing services or development assistance on far-flung islands like Aneityum.

After an assessment in 2013, UNFPA started an integrated development project on the island, which includes family planning and reproductive health care services. The project will also renovate the Analugauhat Health Dispensary, provide microloans for handicraft businesses and support the youth music programme.

Through the programme, Mr. Shing has become a champion of the needs of young people. After attending a UNFPA-supported workshop at the Vanuatu National Youth Council in June, he wrote “Invest in me,” a song about the power and potential of youth. 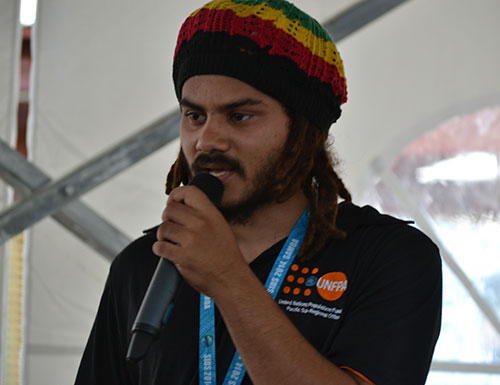 He also participated in a UNFPA panel, called “Investing in Youth Pays Dividends,” at the recent 3rd Conference of Small Island Developing States in Apia, Samoa.

There, he told UNFPA that programmes targeting young people have made a real difference in Aneityum. “These young people, they used to be troublemakers in their communities, but this support UNFPA is giving us is really transforming our communities.”

Today on Aneityum, young people spend their weekends doing volunteer work, such as helping to build homes and weeding plantations. During these events, music club members share information about reproductive health, education and other matters important to young people.

“Youth drive change,” Mr. Shing said of these efforts, “but they need investment.”