UNITED NATIONS, New York - The Heads of United Nations organizations came together during the 58th session of the Commission on the Status of Women to release a high-level joint statement emphasizing the important role of the Millennium Development Goals (MDGs) in promoting gender equality and women’s empowerment globally. Significantly, they noted that despite the progress achieved in recent years, overall advancement for women and girls within the MDGs framework remains unacceptably slow and uneven.

“We are committed to working together with all stakeholders to accelerate efforts to achieve a just and equal world where all women and girls live their lives free from discrimination, violence, fear, ignorance, want and deprivation of any kind,” UN leaders said in the joint statement.

Almost 800 women die every day due to complications during childbirth and pregnancy, and an estimated 222 million women who want to delay or avoid pregnancy are not using modern family planning, largely because they don’t have access to it.

“This is particularly the case for adolescent girls who are forced to marry before reaching adulthood and whose life choices are altered significantly by a single decision that is often made by others on their behalf,” said UNFPA Deputy Executive Director Kate Gilmore.

Globally, around 70 million women aged 20 to 24, or one in three, marry before the age of 18. These girls generally become pregnant at an early age, putting them at risk of health complications.

“Child marriage, early pregnancy and reduced access to education have long-term implications for girls’ ability to develop agency and autonomy, contributing to perpetuate the cycle of poverty and inequality,” said Ms. Gilmore.

The panellists also reiterated that HIV/AIDS is the leading cause of death worldwide for women of reproductive age (15 to 49), significantly contributing to maternal deaths and ill-health.

The participants agreed that adolescent girls must be a top priority in the post-2015 development agenda, and that political will and economic resources must be identified to tackle the existing cultural norms that contribute to their low status, poor health and inability to claim their rights. 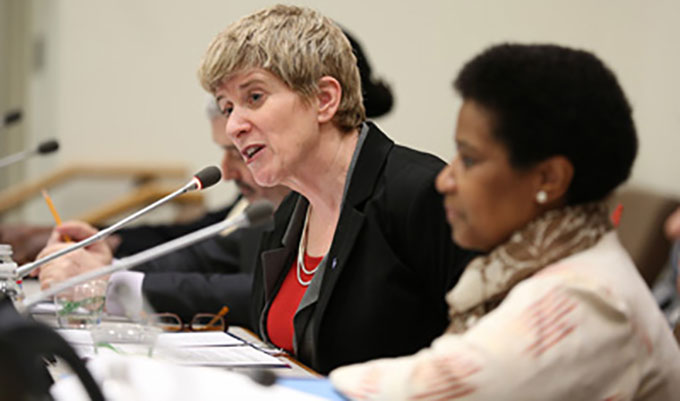