Ethiopia's work with adolescent girls has garnered first prize in a Fund-wide contest to identify good practices related to adolescents and youth. Criteria included relevance (to UNFPA's strategic plan), innovation (in its approaches), impact (as demonstrated by positive and tangible results) and replicability (whether it can be effectively scaled up). The following feature story, and related box, explain how this model project amply fulfills those criteria.

BAHIR DAR, Ethiopia — When she was just a toddler, Zufan Fentahun was married to a much older man.

But at the age of seven, Zufan was among the first group of girls to join Berhane Hewan (Light for Eve, in Amharic) when the project was piloted in her locality, Messobo, in 2004. Just a year later, her marriage was annulled and, since then, her life has taken off in a new direction.

"The programme was a lifeline to me," Zufan says. "It has transformed my life as well as that of my family. If Berhane Hewan were not here, I would have borne children at a very young age and would have been poor."

Through the programme, which aims to support both married and unmarried adolescent girls, Zufan learned that child marriage was a violation of her human rights, and challenged her parents to annul hers. She even told them she would bring the issue to the authorities if they did not.

Attending school instead of bearing children 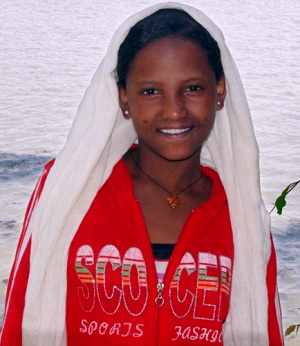 Zufan Fentahun dreams of enabling other girls to benefit from the kinds of  opportunities she has .

Now, instead of bearing children before her body is ready, she is earning enough money to pay for her own education. Through the project, she was awarded a chicken and a ewe and out of the proceeds of the sales from breeding them she has bought a cow and now keeps a vegetable garden. She has started a bank account and covers the costs associated with her 9th grade education on her own. "I have no words to express my gratitude to Berhane Hewan," Zufan adds.

Started as a pilot project in one locality eight years ago, Behane Hewan has now expanded to 36 communities in three districts of the West Gojjam Zone of the Amhara Region in northern Ethiopia and has touched the lives of more than 11,000 girls. UNFPA, together with the Ministry of Youth and Sports, the Amhara Region Bureau of Youth and Sports and Population Council, started the programme to empower adolescent girls, both married and unmarried.

One of the highest rates of child marriage in the world

The Amhara Region in Ethiopia has the lowest median age at marriage in the country at 14.7 years –significantly below the national figure of 16.5 years – according to the Ethiopian Demographic and Health Survey of 2011. This Region has one of the highest rates of child marriage in the world though the Family Codes of the Region as well as the country provide that the minimum legal age of marriage is 18 for both girls and boys. Fifty-six per cent of Ethopian girls  marry before the legal age.

Child marriage  (a fate that 142 million girls worldwide face if current trends continue)  violates the rights of children and young women. It also causes serious harm to children and young women by increasing their vulnerability. Forced sex, premature pregnancy, and high rates of infant mortality can cause long-term psychological trauma. And there is a high risk of sexually transmitted infection, including HIV. Rates of obstetric fistula are very high here, as girls who are not fully developed are more likely to encounter obstructed labour.

Most married girls feel that they wed too early, that they did not know their husbands beforehand, and had sexual initiation as a result of force, according to a baseline survey undertaken in connection with the project. Many of these marital unions are unstable and many girls flee their home for urban areas to escape child marriage. Once in the urban centers, they are mostly without a social support forcing them either to become sex workers or domestic servants where they are liable to be further abused and exploited.

A multi-pronged approach to the issue of girls' vulnerability 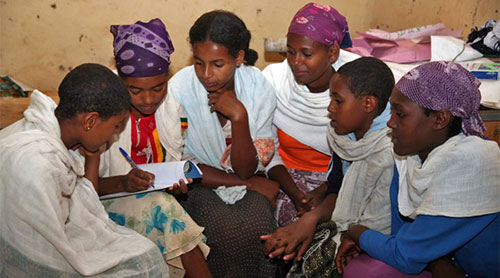 Berhane Hewan helps girls stay in school longer, which has been shown to reduce the likelihood of their marrying young.

The project took a multi-sectoral approach to address the underlying factors that increased the vulnerability of adolescent girls. Keeping girls in school, creating linkage with livelihood programs, and addressing the social isolation of marginalized groups were some of the strategies. The programme engaged a number of groups at community level to be able to address the practice of child marriage and improve the lives of adolescent girls.

Community Conversation meetings have been very instrumental in winning support for the project among members of community. They have also helped to build awareness on sexual and reproductive health and HIV and promote service utilization. Discussions aim to find ways to protect and nurture young women and girls.

Female mentors who were recruited and trained from the community have played a critical role in effectively implementing the programme. Close collaboration and implementation with the government contributed to its success. In addition, decisions, technical and programming guidance and investments are evidence-driven, with the well-being of the girls at the fulcrum.

Brightening hopes for out-of-school girls in the capital 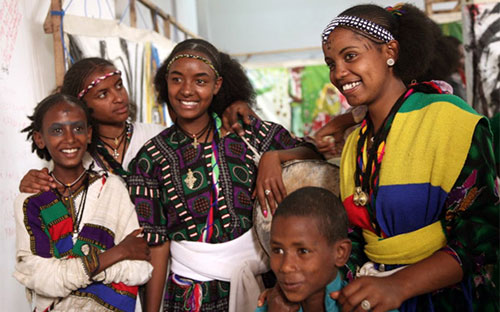 Child marriage robs many girls of their dreams.

In the bid to address the needs of vulnerable adolescent girls who flee to urban centres to escape early marriage, a parallel programme was designed and implemented in Addis Ababa – in view of the fact that many of the girls flee to the capital. This programme called Biruh Tesfa (Bright Hope) is designed to assist out-of-school girls by creating safe spaces through which they can build support networks with other girls as well as relationships with supportive adults. The project, which is being implemented through the Addis Ababa Youth and Sports Bureau, promotes functional literacy, life skills, and reproductive health education, including HIV awareness.

In the presence of various stakeholders, UNFPA officially announced the end of its support to the Berhane Hewan on 16 December at a hand-over ceremony in Bahir Dar. It was noted that the project had been a catalyst for attracting additional resources – DFID, the UK Department for International Development, is providing support to scale-up the project to 38 districts, which will affect some 200,000 girls.

Although the programme will change name and ownership, Zufan remains committed to what it represents for the adolescent girls of her region. "My dream," she said, "is to enable young girls to benefit from opportunities availed by programmes such as Berhane Hewan and I would like to work with government in realizing that and rescue young girls from fistula and AIDS." A noble cause in deed.

—Text and photos by Abraham Gelaw

Adapted from the Good Practices case managed by Benoit Kalasa