NURA, Kyrgystan—On the night of 5 October, most of the children and older persons in the small village of Nura were tucked in their beds when a powerful earthquake struck.

The working adult population – mainly sheep herders – usually retires early along with the rest of their family members. But that evening, many were outside in the local schoolyard waiting to hear the results of a local election. As a result, many were spared from being buried beneath the rubble that was once their homes. Sadly, many of their children were not. 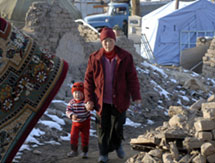 Over half of the houses in Nura collapsed in the earthquake, which measured 6.6 on the Richter scale and took the lives of 75 local residents, including 43 children. Another earthquake followed shortly after.

Before the quakes, some 900 people lived in the village, which is near the China border. With over 200 people either killed or injured, many are dealing with the loss or injuries of multiple family members.

A 73-year-old woman, for instance, lost nine of her relatives, including a son, a daughter, a grandson and their respective families. Her only thought is “Why did Allah not take me?”

A 79-year-ol man, who lost his home and all of his family members, wonders if he has the motivation to build a new house—let alone a new life—at his age. 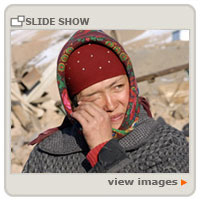 Mountainous and seismically active, Kyrgyzstan deals with frequent earthquakes, flooding, mud slides, avalanches, snow storms and mountain lake overflows leaving the Kyrgyz people vulnerable to frequent emergencies. Many of these are exacerbated by glaciers that are melting rapidly because of climate change. According to the Kyrgyz Ministry of Emergencies, there were 179 natural disasters in the first six months of 2008, compared to 209 in all of 2007.

Littering the unpaved roads of Nura are chunks of mud and clay, and flimsy sheets of iron. This is all that is left of the village infrastructure, as nearly 70 per cent was flattened by the quakes, including the medical midwifery post.

Because the quakes wiped out the local school’s electrical heating and storage facilities, all children of school age were evacuated to a school boarding house in a nearby district. With so many children deceased oraway, the town is unnaturally quiet.

Nura is roughly an eight-hour drive, over a steep mountain pass, to the nearest city. Generally, road conditions are extremely poor and worsen with ice and snow.

With winter approaching, nights are already bitterly cold. The Ministry of Emergencies has provided 150 temporary shelters, and more are still to come, so that each family will have a roof over its head. However, keeping the draughty shelters warm is challenging, and reconstruction will not begin until next spring.

The extreme cold weather, bad roads and destruction of medical facilities by the quakes could contribute to increased at-home birth deliveries, and in places where skilled birth attendants and emergency obstetric care are not available, a pregnancy can be fatal.

Last year’s harsh winter depleted the country’s hydroelectric resources, thus increasing energy costs and food prices. This has limited the purchasing ability of those most vulnerable and could increase the incidence of maternal and infant deaths, unsafe deliveries and other reproductive health problems.

Immediately following the crisis, UNFPA, the United Nations Population Fund, in partnership with the Kyrgyz Ministry of Health, provided those affected by the tremors with supplies for clean and safe at-home deliveries and for the under-equipped medical facilities, as well as medicines, including antibiotics, for obstetric complications. Upon discussions with local medical staff and residents, UNFPA also provided hygiene essentials, such as soaps, toothbrushes and warm clothing.

In 2005, UNFPA’s Humanitarian Response Branch conducted a needs-assessment in reproductive health in order to identify gaps in services and supplies. This advance work strengthened the response to the crisis, and, as a result, a supply chain was established ambulances have been procured and capacity-building of health providers has been arranged.

To ensure that UNFPA’s supplies will reach the remote mountain area, UNFPA will be collaborating with Aga Khan Foundation for helicopter transportation. This assistance is being coordinated by the Kyrgyz Ministry of Health.