KILINOCHCHI, Sri Lanka — Ramesha, a schoolteacher, waits patiently for a prenatal exam at a mobile clinic in this former battle zone. After being displaced 13 times in two years, she has finally returned home. She has come to a facility run by the Ministry of Health and the Family Planning Association of Sri Lanka with support from UNFPA, the United Nations Population Fund.

Ramesha got married in May 2008, just as the military conflict in the North intensified. Soon afterward, she and her husband ran away to escape the constant threat to their lives from heavy shelling and gunfire that continued into the night. Her husband was hit by shrapnel as they fled, and his leg had to be amputated. He spent months in a hospital while Ramesha moved from one camp for internally displaced persons (IDPs) to another.

With the end of the war last May, Ramesha was reunited with her husband in Manik Farm – the largest IDP camp inVavuniya, home to 280,000 people at the time.

One year later, the tents remain in Manik Farm but the barbed wire has been removed, people are moving about, shops have reopened on the roadside and over 220,000 former IDPs have left to return home.

In Kilinochchi, where the heaviest battles between government troops and Tamil Tiger rebels were fought, billboards advertising mobile phones now line the streets. Amid the shelled, roofless houses, a new railway line is being built. Buses race along the A9 highway, carrying thousands of southerners to a region they have not been able to visit for over 30 years.

For Ramesha, returning to a town free of shelling and gunfire was more than she had imagined possible. “I left without knowing when I would come back,” she says. “My house caught fire and only the walls remain, but I am happy to be back home and to know that I will not have to run away soon. Most of all, I am happy that I will be able to bring up my first child at home and give him or her a good education in a peaceful environment.”

Dealing with the legacy of war 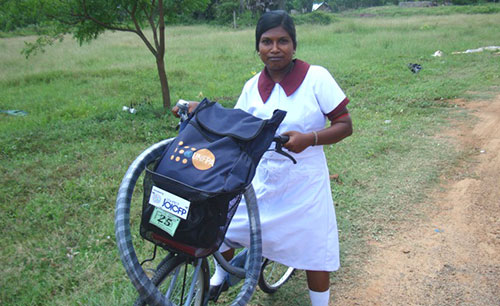 Kavinda, a midwife, has just received a new bicycle for her home visits in Kilinochchi, through a programme supported by the Japanese Organization for International Cooperation in Family Planning. She too was uprooted to Manik Farm, where she looked after some 5,000 pregnant women. Now she is mobile and has fewer women to cover. However, other problems remain. “We have difficulty keeping track of people, as most have lost their birth certificates and records along with their belongings, and we still have limited facilities so we have to sometimes conduct clinics under the trees,” she explains.

“The hardest thing is to talk to pregnant women and get them to open up,´ Kavinda adds. “Sometimes they look dazed and seem too confused to start life all over again, let alone bring up a child. These women may be free now, but there is much to heal. It will be a long way for them to get back to normal.”

Ramesha expresses similar sentiments. “As a schoolteacher, I am surrounded by children. I still see traumatized and unsettled looks on their faces. One year on they are yet to feel the freedom.”

Providing a broad range of support

UNFPA has been at the forefront in catering to the reproductive health needs of women and girls in conflict-affected areas of northern Sri Lanka. At the end of the military offensive, UNFPA partnered with the Ministry of Health and the Family Planning Association to conduct some 441 mobile and static clinics providing prenatal and post-natal care, voluntary family planning and counselling services to more than 20,000 clients in Vavuniya IDP camps. Over 32,000 hygiene packs containing sanitary pads and other toiletries were distributed among women and girls to facilitate their mobility and maintain their dignity.

UNFPA has now moved these services to the resettled areas like Kilinochchi, and continues to support restoration of the health infrastructure through the provision of reproductive health supplies and equipment. As a next step, it will set up safe and accessible spaces for women like Ramesha and Kavinda, to provide psychosocial support, legal aid, livelihood training and awareness raising on women’s rights and gender-based violence.