In 2008, for the first time, more than half of the world’s population will be living in urban areas. By 2030, towns and cities will be home to almost 5 billion people. The urban population of Africa and Asia will double in less than a generation. This unprecedented shift could enhance development and promote sustainability—or it could deepen poverty and accelerate environmental degradation. The 2007 State of World Population report outlines the challenges and opportunities presented by the coming, inevitable urban growth. It also dispels many misconceptions about urbanization and calls on policymakers to take concerted, proactive steps to harness the potential of cities to improve the lives of all. 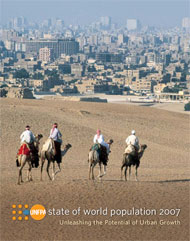