SANA’A, Yemen – Twenty-three-year-old Amani, from Shabwa Governorate in southern Yemen, waited years to have a child. But when she finally did get pregnant, her husband lost his job. As his income disappeared, so did her ability to access maternal health services. And then, she experienced a life-threatening complication.

“Eight month into the pregnancy, I began to feel severe pain. Day by day, my situation was getting worse,” Amani explained to UNFPA recently. “My blood pressure was rising, headaches were constant and I was beginning to lose my eyesight; I could barely walk.”

She was experiencing pre-eclampsia, a dangerously high blood pressure during pregnancy that is one of the world’s leading causes of maternal death.

“My husband was getting so scared. He was not ready to lose me or our first child,” she recalled. “We were desperate for money to hire a car to take me to a hospital. He finally managed to borrow some money from a friend. We travelled for six hours to Sayoon City to reach a hospital that was able to treat me.”

When Amani arrived, the health staff stabilized her condition. They treated her for 15 days, and then, under the care of midwives, she gave birth to a healthy baby.

“When I saw how the hospital staff took care of my wife, I knew she was in very safe hands,” said Amani’s husband, Shaef Khamis. “The happiness we felt when we held our baby for the first time is beyond description.”

The maternity ward at the hospital is supported by UNFPA. This is not unusual – UNFPA is the sole provider of life-saving reproductive health supplies and medicines in Yemen.

In 2019, more than a million Yemeni women received reproductive health services from UNFPA-affiliated programmes, supported by Canada, the European Commission’s Humanitarian and Civil Protection Department, the Netherlands, the United Arab Emirates, the World Health Organization (WHO) and the Yemen Humanitarian Fund. This health care included over 130,000 normal deliveries and more than 23,000 Caesarean section deliveries.

The grinding conflict in Yemen has left the country’s health system in tatters. Fifty percent of health facilities are not functioning or only partially functioning, while 19.4 million people lack access to basic health services.

Due to staff shortages, lack of supplies, inability to meet operational costs or conflict-related damage, only one-third of functioning health facilities provide reproductive health services. Many have inadequate or obsolete medical equipment and supplies. Health staff have gone unpaid or irregularly paid for more than two years, forcing many to seek other employment.

Today, the country has only 10 health workers per 10,000 people – less than half the WHO minimum benchmark.

Women and newborns are suffering under these conditions, and under the economic hardship brought about by the conflict. More than one million pregnant and breastfeeding women are malnourished, according to UNFPA estimates, which threatens the health and lives of both women and their babies.

The funding situation has also been precarious. By mid-August 2019, UNFPA’s appeal for $110.5 million was only 36 per cent funded. Procurement of essential maternal health medicines dwindled, and 100 of the 268 UNFPA-supported hospitals were closed, affecting reproductive health access for some 650,000 women. Fortunately, more than $50 million was secured by the end of October, allowing all closed facilities to re-open and ensuring support for essential health personnel and continuous supplies of essential medicines. 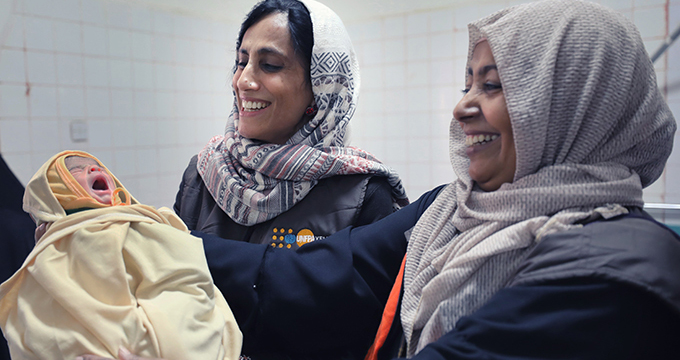 Five things you need to know about Yemen's blockade