ISLAMABAD, Pakistan – “Helping women suffering fistula is my mission in life," Razia Shamshad said about the maternal injury from childbirth that she thought would ruin her life. “No woman deserves to live in misery, especially when it is treatable.”

Ms. Shamshad, 29, was born in a small village in southern Punjab. Her family did not want her to go to school, so she had only received an informal religious education by age 13, when she was married off. Ms. Shamshad was already expecting her first baby within a few weeks of her wedding. Then, when she was six months pregnant, her husband died in a road accident.

In the end, her daughter was stillborn, and Ms. Shamshad suffered serious damage. She developed an obstetric fistula, a hole in the birth canal. Fistula leaves women leaking urine, faeces or both, and often leads to chronic medical problems.

The condition is preventable with timely access to quality medical care, such as Caesarean section. Tragically, it persists among the most marginalized women, with pregnant adolescents and undernourished women facing particularly high risks. And its sufferers are further marginalized, often facing ostracism and discrimination.

"People would either avoid me or just make fun of me," she said. "I never felt clean."

A stroke of good luck

But Ms. Shamshad was able to put her life back together. Her relatives learned about free treatment available at the Koohi Goth Women’s Hospital, which specializes in treating fistula and other conditions related to reproductive health. Two years after her ordeal, her family paid for her to travel to Karachi for care.

Ms. Shamshad’s condition was complex, and required multiple surgeries between 2010 to 2016. Even so, she has been able to regain her life.

“Her determination was exceptional. She was resilient and strong and was able to pull through the difficult process successfully,” said Dr. Sajjad Ahmed, who was trained by UNFPA to perform fistula repair surgeries.

Ms. Shamshad went on to meet her current husband. They adopted a little girl. And though she was not expected to be able to get pregnant again, she surprised everyone by conceiving. With regular prenatal care and a C-section, she had a healthy baby girl.

In many ways, Ms. Shamshad was lucky. The story is very different for many fistula survivors in Pakistan, who are unaware that there is treatment available.

And many more women and girls are at risk.  Access to reproductive health services remains a challenge for women in Pakistan. Only an estimated 52 per cent of women give birth with the help of a skilled attendant, leaving them vulnerable to complications like prolonged, obstructed labour.

In partnership with the Pakistan National Forum on Women's Health, UNFPA has established treatment centres for fistula patients across the country. UNFPA also supports campaigns to raise awareness about the importance of skilled obstetric care and ending the stigmatization of women with fistula.

UNFPA leads the global Campaign to End Fistula. Since 2003, UNFPA has helped perform over 105,000 surgical fistula repairs in more than 55 countries in Africa, Asia, the Middle East and Latin America.

Today, Ms. Shamshad lives with her family in Karachi. She volunteers at the same hospital where she received the treatment that turned her life around.  Ms. Shamshad helps new patients recover after their own treatment.

“I believe life experiences shape us into the people we need to become," she told UNFPA. "My experiences have given me the courage and drive to help women who have lost all hope because of fistula.”

Ms. Shamshad recently represented the hospital at the Nairobi Summit on ICPD25 in November 2019. She used her story to inform and motivate other women, to whom she has proven to be a source of encouragement.

"Never give up hope," she told them. 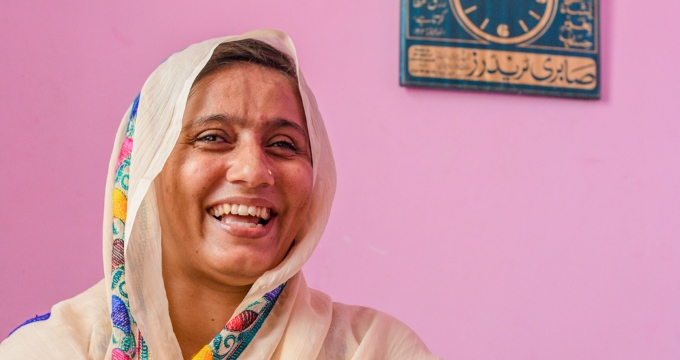