KYIV, Ukraine – Not long ago, Olena* feared for her life and for her children. For years, husband assaulted her physically and sexually. He threatened to kill her if she ever left. But she found the strength to protect her children and start her life over – with help from a hairdressing course.

Olena met her husband online, when they were both teenagers.

“Since we were both orphans, we didn’t have close people in our lives to talk to us about the consequences of sexual relationships," she recalled. "I ended up pregnant at age 16.”

They quickly married. Olena did not learn until afterward that her new husband was abusing drugs.

“Before, he was always calm and balanced,” Olena recalled. “Then one day he came home, picked up a frying pan and started running around the flat, waving it in the air. I went numb. Apparently, I had no clue who I married.”

But she was newly responsible for a baby, and had no other support. She felt she had nowhere to turn.

The situation only grew worse. Her husband would beat her, even strangle her, if she refused to submit to his demands. He controlled every aspect of her life. She struggled to financially support their family – which grew to include five children – while he refused to work.

At one point, a friend suggested she move her children into a “parental house,” a church-run lodging for people in need. But her husband threatened to kill her if she ever left him.

Gender-based violence is a widespread problem around the world, and Ukraine is no exception.

UNFPA works with partners in Ukraine, including the government, to prevent and address gender-based violence. UNFPA-supported programmes help to identify vulnerable women and connect survivors to shelters, psychosocial care and other support.

Then one morning, Olena says, she realized she could take no more. Her husband demanded breakfast, but there was no money, no food, and she was exhausted.

“There’s nothing to eat. Look at the children, into their hungry eyes,” she told him. “You’re their father, you’re supposed to take care of and protect us, not make us protect ourselves from you.”

She called her friend, who helped her move into a parental house. She and her children have been there for two and a half years.

Still, Olena struggled to start over.

At first she worked as an assistant teacher in a kindergarten. But she wanted a job with more flexibility so she could still take care of her children.

“On top of the world”

Then she learned about a free hairdressing course.

The programme, called “Beauty for All,” is much more than just hair styling. UNFPA refers violence survivors and other vulnerable women to the programme, which is funded by the L’Oréal Foundation. The course helps women learn the skills to earn an income, and also provides psychosocial support, including group and individual counselling. So far, 28 Ukrainian women have received training through Beauty for All.

“At first I didn’t think that I would qualify to participate,” Olena explained. “So, when I did, I felt on top of the world.”

The programme's mentors quickly realized Olena had a talent for the work, though she initially did not believe them. But as soon as she graduated from the programme, she was offered an internship that would lead to employment in one of the city’s most celebrated hair salons.

“Before the course, I was very reticent, scared of big groups of people, and always kept to myself,” Olena said recently. “If you saw how I was before the course and how I am now, you’d be surprised how much I’ve changed. These two girls are like two different people!” 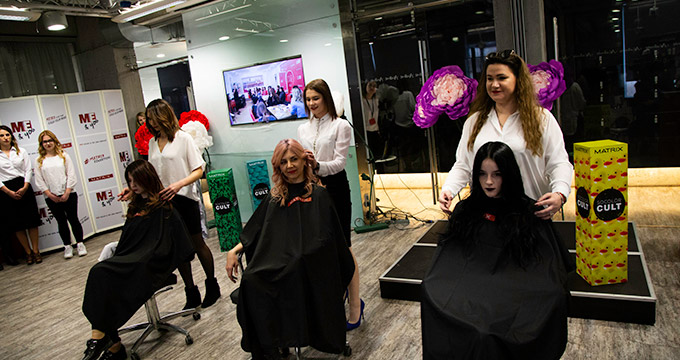