JUBA, South Sudan – When Poni Helen found out she was pregnant at 16, she was confused and had no idea where the situation would lead. She only had one thing in mind and she was certain of it – she wanted to continue her studies.

When her parents discovered her condition, they beat Ms. Poni and forced her to move in with her boyfriend. The families started planning a child marriage. She protested at first, but in the end Ms. Poni obeyed her parents. She stayed only a month before returning home and asking for their forgiveness.

Ms. Poni then gave birth safely, and when her baby was five months old she let her father know she wanted to go back to school. He refused and told her: "You are already spoiled, you are of no use now."

“It was not intended but it happened, and I have plans in life," Ms. Poni explained to her father. It was a conversation she later recounted to a group of teenagers at youth event organized by UNFPA to raise awareness on child marriage in South Sudan. "I knew I made a mistake, but I still wanted to go back to school.”

Although Ms. Poni's father was firm on his decision not to fund her education, an uncle agreed to pay for her tuition. She would support herself and her baby by taking a part-time job as an assistant in a beauty salon.

When she finished high school, Ms. Poni went on to college. Today she is 24 and in her second year of law school. She continues to work part-time while raising her six-year-old son.

Her decision to say no to child marriage and pursue her dream of becoming a lawyer was not easy. But Ms. Poni pressed on despite all the challenges, and now hopes her story may inspire other girls to do the same.

Ms. Poni says she feels motivated to achieve greater things in life when she sees empowered women who are thriving in their professions. She wants to be a lawyer to help the poor people in her country – especially women and girls in need who have no one to turn to.

Ms. Poni’s experience led her to join Crown the Woman, a local NGO raising awareness to empower girls to say no to child marriage. UNFPA works with Crown the Woman and other partners and provides technical assistance for the Ministry of Gender, Child and Social Welfare to help the government implement its national action plan to end child marriage in South Sudan, which was launched in June 2018.

UNFPA is also supporting efforts by parliamentarians and government officials to learn from the experiences of other countries that have ended child marriage and established special courts against gender-based violence and other harmful practices, including child marriage. Part of the policy advocacy is to raise the minimum age to marry to 18 in national laws.

Ms. Poni, meanwhile, is doing her part to raise awareness about the harms of child marriage.

“In every community I visit, I take the opportunity to talk to girls and share with them my story," Ms. Poni told the teenagers in Juba. "I do this to remind them to take care of themselves, and also for them to be aware that they too have that choice to say no [to child marriage] and pursue their dream.” 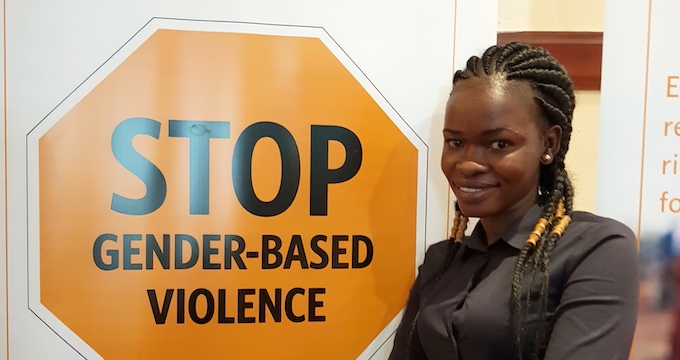