Reaching pregnant women at risk from conflict in Maguindanao, Philippines

DATU SALIBO, Philippines – “I was inside our house when I heard powerful explosions and intense gunfire,” recalled Nadia Muson, 35. Eight months pregnant and a mother of six, Ms. Muson and her family were within earshot of the armed conflict in the Philippine province of Maguindanao, where hundreds of pregnant displaced women are highly vulnerable.

“I was so anxious and nervous. All I could think about was the safety of my family,” she told UNFPA from Datu Salibo, a municipality of almost 15,000 people in Maguindanao, part of the new political entity Bangsamoro Autonomous Region in Muslim Mindanao (BARMM). The BARMM was formed in February 2019, around when Ms. Muson fled with her family from another village within Datu Salibo to stay with relatives.

She has remained there since. And she is not alone.

More than 45,000 people have been displaced by the violence in the BARMM, according to the latest official update. UNFPA estimates there could be as many as 1,400 pregnant women among the affected population, around 500 of whom are expected to deliver in the next three months. Over 900 displaced women have given birth in the last six months.

Many of the displaced people left their homes with only the clothes they were wearing, which are now torn. They feel ashamed to come out in public, humanitarian responders say, and their lost sense of dignity could prevent them from accessing humanitarian relief and other critical services.

“Every time there is an emergency evacuation, people flee their homes with just a few of their belongings and sometimes none,” said Dr. Ameril Usman, who heads the health emergency management system at the BARMM Ministry of Health. “This makes them very uncomfortable and gives them a feeling of being undignified and subsequently is a loss to their self-esteem.”

“Women do not stop getting pregnant or delivering babies just because an emergency hits,” noted Iori Kato, UNFPA’s representative in the Philippines. "In times of crisis, it is more important than ever to protect the dignity, safety and reproductive health of pregnant and lactating women as they become even more vulnerable.”

An emergency, Mr. Kato added, is when pregnant and breastfeeding women most need services for hygiene, safe pregnancy and childbirth. Women and girls also need services to protect them from gender-based violence.

In partnership with the BARMM Ministry of Health and Ministry of Social Services and with support from the Australian Government, UNFPA has distributed close to 1,000 “dignity kits” for pregnant and lactating women in Maguindanao. The kits contain personal hygiene items such as sanitary napkins, underwear, soap and shampoo.

The kits also contain a large, multi-colored and multi-function cotton cloth, locally known as a "malong," that can serve as a wrap-around dress, a blanket, or a curtain to allow women privacy and dignity.

And because the risk of gender-based violence escalates in emergency settings, the kits also contain simple tools – including flashlights and whistles – that can help women travel more safely in the dark. They also contain a portable toilet that women and girls can use at night, helping them avoid a potentially dangerous trip to public toilet facilities.

The dignity kits are part of UNFPA's overall efforts to help local authorities support pregnant women and new mothers in the BARMM. UNFPA is also assisting the BARMM Ministry of Health by coordinating an assessment to identify additional needs such as medicines, equipment and supplies to ensure clean and safe deliveries for vulnerable women. 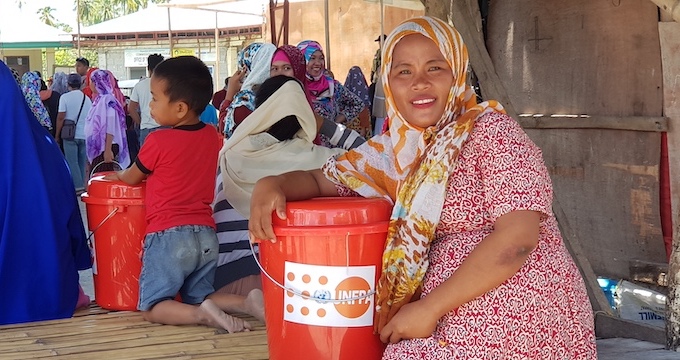 Reaching pregnant women at risk from conflict in Maguindanao, Philippines