MOSUL, Iraq – After the Islamic State of Iraq and the Levant (ISIL, also known as ISIS or Daesh) captured Mosul in 2014, most of the maternity wards and hospitals in the city were shuttered, leaving hundreds of thousands of women and girls in a grim state. “During the reign of ISIL, we were in a really bad state. We had nothing,” Eman, a mother from West Mosul, told UNFPA.

“ISIL burned the whole hospital down,” said Dr. Ibtihal Jabouri, the director of obstetrics and gynaecology at Al-Khansa Hospital. “When I first saw the delivery rooms and operating rooms and that everything was burned… I couldn’t help but cry.”

Today, about a year and half after the fall of ISIL’s last stronghold in Mosul, health services have yet to be fully restored. And the need for care is as critical as ever as residents pick of the pieces of their former lives.

“When ISIL fighters came to our town, they stayed for two years. We faced hunger and lack of medicines,” said one woman, who preferred to remain anonymous. “They would come to our house, harass my husband, and threaten to blow up our house.”

Humanitarian organizations moved in to provide services where possible during the conflict.

“UNFPA stepped onto the plate and actually created this hospital out of nothing,” said Taryn Anderson, clinical coordinator at Hammam Al-Alil Field Hospital. “This was during the Mosul conflict, when we were relatively close to the front lines, so that any potential patients could evacuate to us for medical care.”

But the damage has long outlasted ISIL’s control.

“There are very limited maternity services in the region. A lot of the facilities have been destroyed through conflict,” Ms. Anderson said.

The economic impact of the crisis has left many patients unable to afford essential services.

With local partners, UNFPA is helping to rehabilitate health facilities, including the obstetrics and gynaecology department of the Mosul General Hospital. “Work has been steadily increasing towards full functionality. Presently, we perform 10 to 12 Caesarean sections daily. Sometimes we have up to 20 to 30 natural deliveries per day,” Dr. Ibraheem said.

UNFPA-supported services are provided for free.

“I was supposed to have a natural childbirth. In the end, the doctors decided to do a Caesarean section because it was best for the baby. If it wasn’t for this hospital, we would not have had anywhere else because we don’t have money,” said Eman, who recently delivered her fifth child.

The conflict has cast a long shadow on the residents of Mosul.

“A lot of displaced people arrived with serious psychological trauma,” said Samira, a social worker stationed at a displacement camp outside Mosul.

“When ISIL came, we had to leave on foot. I was pregnant, and I fled with my son to a nearby camp after my husband was killed by ISIL,” one anonymous Mosul resident recalled. She sought psychosocial support services at a UNFPA-supported women’s centre.

In 2018 in Mosul, UNFPA supported 14 reproductive health clinics and six hospitals in the area, and reached 360,000 women and tens of thousands of girls, men and boys with reproductive health services, including consultations, family planning, antenatal care, and other assistance. 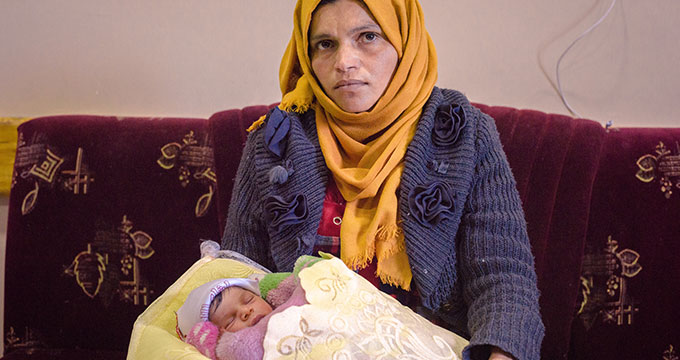