UNITED NATIONS, New York – Women and girls make up nearly half of the 258 million people worldwide who have crossed international borders to escape danger or pursue opportunity.

Amidst unprecedented levels of forced displacement – with 68.5 million people driven from their homes by the end of 2017 – about half of refugees, too, are women and girls.

“We had to leave that place because there was a lot of violence, fighting,” a young Somali woman in Nairobi told UNFPA. “I mean, there was no peace and there was no future there; no education, nothing.”

With support from the Danish Refugee Council (DRC), UNFPA interviewed over 1,500 young refugees and migrants in Beirut, Cairo, Nairobi and Tunis, all major transit cities. Their responses provide insight into their reasons for leaving home; their hopes, expectations and lived realities; and their access to sexual and reproductive health services.

What becomes clear above all is that there’s no single story to tell about young people on the move. But for refugee and migrant women and girls, gender inequality is a common thread throughout these otherwise diverse realities, intersecting with the other vulnerabilities they face.

Nearly half of women and girls on the move experience abuses and violations of their rights during their journeys, according to recent research from the DRC-supported Mixed Migration Centre (MMC).

Migration curtails access to protection services, disrupts social networks, and throws women and girls into desperate circumstances that can prompt desperate and risky actions. They contend with heightened risks of sexual and gender-based violence, child marriage, exploitation and trafficking – accounting for nearly three quarters of all human trafficking victims, according to 2016 data from the United Nations Office for Drugs and Crime. 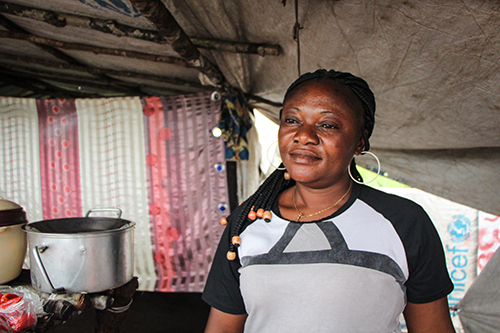 “We lost everything,” said Dadi Ndaia, who fled with her family to escape a massacre in her hometown in Kasai, the Democratic Republic of the Congo, in 2017. In Louva refugee settlement in Angola, she runs a restaurant to generate income and buy nutritious food for her three children. © UNFPA/Tiril Skarstein

Especially vulnerable are those who move irregularly, usually relying on smugglers to help them cross borders. And the risks redouble when women and girls travel without their families, as tended to be the case among those UNFPA interviewed in Cairo, Nairobi and Tunis.

The findings of the UNFPA and MMC studies on migrants from Asia and Africa resonate with experiences documented elsewhere. Adolescents escaping poverty and gang violence in their home countries in Central America, for example, encounter staggering risks of violence and abuse during their northward journeys.

“They migrate to flee abuse in their own homes, but tragically, they are also assaulted along the journey,” said Ana García Carías, first lady of Honduras, during a panel discussion convened by UNFPA and Denmark during the 73rd Session of the UN General Assembly. “For many girls and young women, migrating is the only way to escape insecurity, oppression and abuse – but in some cases, they die.”

Their lives come under threat also from lack of access to sexual and reproductive health services – the leading cause of death and disease among displaced women and girls.

Nearly three-quarters of young refugees and migrants interviewed by UNFPA did not know where to access sexual and reproductive health services; others said they avoided them, citing discrimination and disrespectful treatment. UNFPA found that over 80 per cent of women and girls who had previously used an IUD and over 60 per cent who had been taking contraceptive pills had stopped using any method at all.

Without access to sexual and reproductive health care and family planning, women and girls risk serious infections and unplanned pregnancies that can thwart their dreams and threaten their health. In the absence of skilled birth attendance and other maternal health care, they risk dying from pregnancy and childbirth complications that, with timely treatment, would not have endangered their lives.

“The acute vulnerability of women and girls on the move is not a sign of weakness – it’s a sign of inequality,” said Crown Princess Mary of Denmark at the panel discussion. 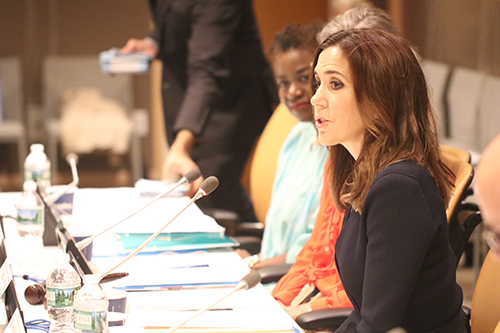 “Remember that women and girls are a powerful resource that we would be wise to engage. They are the experts in their own lives. We can support them in accessing the power that the hope of a better life can release,” said Crown Princess Mary of Denmark, at the panel discussion. © UNFPA/Usenabasi Esiet

More often than not, humanitarian assistance has left their rights and needs unaddressed.

The Global Compact on Refugees and the Global Compact on Safe, Orderly and Regular Migration make no mention of sexual and reproductive health and rights. Only a third of needs assessments include specific attention to adolescent girls, as noted by Plan International Secretary-General Anne-Birgitte Albrectsen during the discussion. Even when provision is made on paper, implementation is often lacking – and critical supplies for emergency contraception or post-rape care never reach the women and girls who need them.

With support from partners including Canada, Denmark, Finland, Italy, Norway, Sweden and the United Kingdom, UNFPA is working to fill these gaps. In many hot spots around the world where people are displaced or in transit, UNFPA provides sexual and reproductive health care, dignity kits containing clothing and hygiene supplies for women and girls, and services to address gender-based violence.

UNFPA is also working to improve data and systematic evidence on migration. The collaboration with the DRC will continue, notably through the new data center on forced displacement, led by UNHCR and the World Bank Group and opening in Copenhagen in 2019. 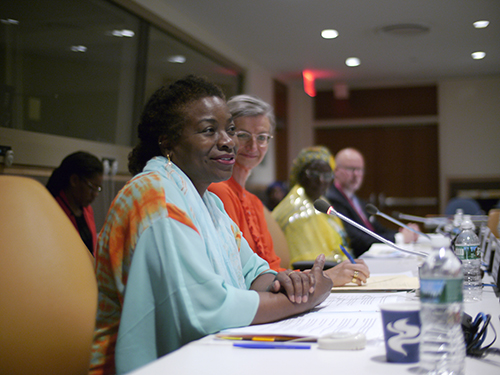 “We have to adapt our services and our policies to their reality,” said UNFPA Executive Director Dr. Natalia Kanem, pointing to the diverse realities and acute vulnerabilities of women and girls on the move. ©  UNFPA/Tara Milutis

“Numbers do matter – they represent the people who matter,” affirmed UNFPA Executive Director Dr. Natalia Kanem at the panel discussion, “and the more mobile a person, the more likely they are to be uncounted.”

Braving the risks to improve their lives

Making sure women and girls on the move are counted is indispensable to protecting their rights. And listening to their voices is a critical starting point. They speak of terrible traumas, more responsibility than a person should bear – but also great resourcefulness, hope, and lives transformed.

Many leave home not knowing how risky the journey can be. But given the hardships back home, most would do it all over again.

“Now we live better than before,” said a young woman interviewed in Nairobi. “We slept on the floor back in Ethiopia.”

In Beirut, another highlighted a different kind of transformation. “My husband was jealous in Syria,” she said. “Now he accepts the idea that I work with him and talk to men.” 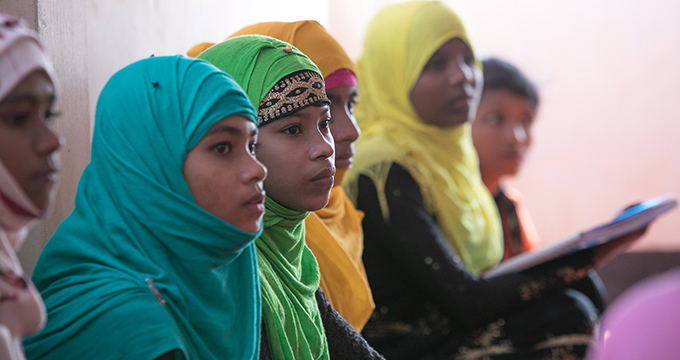