SANA’A, Yemen – The cholera outbreak in Yemen is spreading at an unprecedented rate, with suspected cases of acute, watery diarrhoea increasing by an average of 5,000 every day, and nearly one person dying every hour, according reporting from the United Nations. In less than three months, more than 330,000 suspected cases of cholera have been reported, with nearly 1,800 deaths.

Pregnant and breastfeeding women, especially those who are malnourished, are especially vulnerable. An estimated 1.1 million malnourished pregnant women are at risk, requiring immediate care.

Ibtisam contracted cholera when she was nine months pregnant. “I went to a health facility in my hometown in Rayma Governorate, but they did not know what was wrong with me,” she told UNFPA. “I felt I was going to die and lose my baby. I was going to have my first child, and I was desperate not to lose my child.” 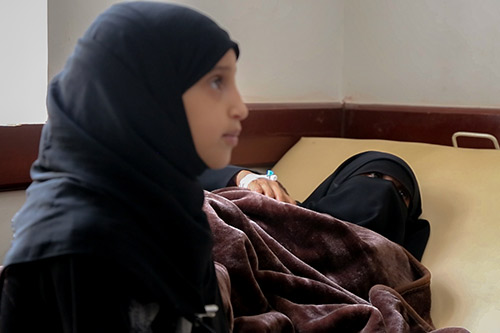 Aman’a, a 35-year-old mother of five, is being treated for cholera. She had tried to take precautions to prevent infection. © UNFPA Yemen

Her husband took her to the 22 May Hospital in Sana’a – five hours away. There, she was diagnosed with cholera and treated.

“Ibitsam was in her last month of pregnancy. If she [arrived] a day or two later, we are not sure we could have saved her or her baby,” said Dr. Farea, who helped treat her.

Worst cholera outbreak in the world

The cholera crisis – currently the worst in the world – comes as a fatal addition to the hardships that Yemeni men and women are facing.

The magnitude of the outbreak is directly linked to Yemen’s brutal ongoing conflict and displacement crisis, the breakdown of health and sanitation systems, and serious food insecurity. An estimated 14.8 million people lack access to health services, and 15.7 million lack access to adequate clean water and sanitation.

Pregnant and breastfeeding women are especially vulnerable to malnutrition, and those weakened by the nutrition crisis are more prone to infections, including cholera. Pregnant women who contract cholera have a higher risk of developing dangerous or even fatal complications.

Women, in their roles as caregivers, may also face heightened exposure to cholera. Yet their lower status in terms of decision-making and control over household resources means they may be less able to seek medical care when they fall sick.

“The number of cholera cases we receive in a day overwhelms us; we can barely cope,” Dr. Farea told UNFPA. “Last week, we received another woman who was in her last month of pregnancy and suffering from extreme dehydration. She delivered early, but the baby only survived for two days. It is so important that pregnant women come to a hospital as soon as they develop symptoms of cholera to not risk their lives or that of their unborn child.” 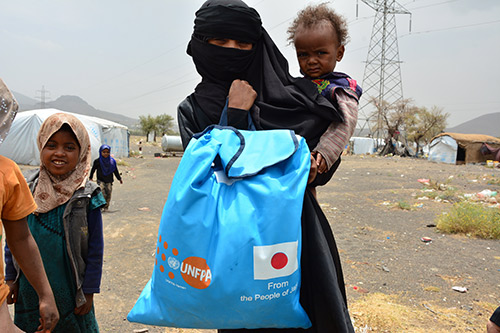 At the same time, women can play a critical role in controlling cholera’s spread because they are traditionally tasked with food preparation. Cholera is often spread through contaminated food or water.

“Most of the cases we receive are women and children. It is important that awareness campaigns also take into account the role women can play and target them more especially,” Dr. Farea said. “If women are made aware about the steps they can take to prevent cholera and detect its symptoms at an early stage, we can save a lot of lives.”

Aman’a, a 35-year-old mother of five, is aware of the need for good hygiene, but hardship conditions have made disease prevention difficult.

“At home, I take all the precautions when preparing food, and make sure my children follow the same. Yet I was infected after visiting one of my relatives,” she said.

She added, “I try to tell my friends and family to maintain good hygiene and wash fruits and vegetables with clean water several times before cooking.”

UNFPA has stepped up efforts to respond to the outbreak, putting a special focus on the needs of women and girls.

Dignity kits – which traditionally contain hygiene items such as soap, sanitary napkins and basic clothes items – have been supplemented with leaflets about cholera prevention and distributed in areas with high numbers of suspected cholera cases. Some 40,000 kits have been distributed, with support from the Government of Japan, since the start of the outbreak in April.

“I was terrified when I heard about the cholera outbreak and how it unmercifully kills people,” said Om Ibrahim, who received one of the dignity kits. She said she would not have been able to afford soap and other items on her own. “I want to protect my children and myself.”

UNFPA-supported midwives, mobile clinics, and community outreach sessions are also providing information about how to control the spread of cholera. And mobile reproductive health clinics are providing nutrition counselling, screening and referral of malnourished mothers and babies in remote and hard-to-reach area.

In addition, 415 reproductive health kits – enough to reach nearly 110,000 women – were distributed in the last three months to health facilities with cholera treatment centres where resources are overstretched. 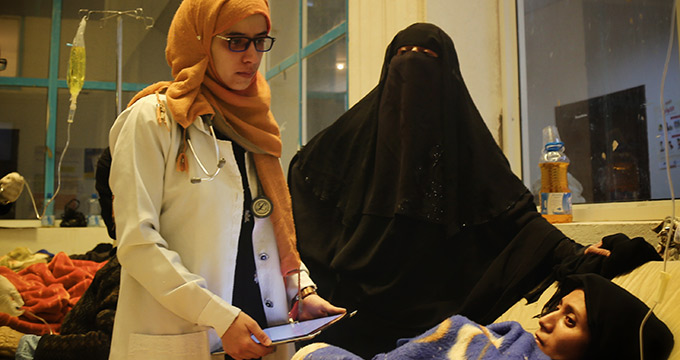