Over 1 million affected by brutal flooding, landslides in Peru

LIMA, Peru – More than 1 million people have been affected by an unprecedented level of flooding, landslides and heavy rains in Peru. Twenty-four out of the country’s 25 departments are grappling with the crisis, including Lima, the capital, where a third of the population lives.

Dozens have been killed by the disaster. Thousands are without proper sanitation, adequate shelter, drinking water, protection from gender-based violence, and access to sexual and reproductive health services.

UNFPA estimates some 5,500 women of reproductive age are at risk of sexual assault, and that at least 550 pregnant women require urgent assistance. Assistance will also be required for the 4,900 women expected to develop pregnancy-related complications over the next nine months.

UNFPA is working with the government, the National Humanitarian Network and other United Nations agencies to respond to the needs of those affected.

“The situation is decaying each day”

Amid the chaos, community members are emerging as first responders. María, a mother of two, was one of the first people to begin organizing help for her community in Los Pinos, in the district of Catacaos.

"I feel deeply frustrated because I cannot do more for our people,” she told UNFPA. “We have not received aid yet. The situation is decaying each day, and needs are increasing.”

Her explanation was interrupted by an alarm, signalling that the water level had reached a new high. People rushed away to protect their families and belongings.

Most of the affected districts are in the country’s usually dry North Coast, in the departments of Ancash, La Libertad, Lambayeque, Lima, Piura and Tumbes.

Entire towns have been washed away by the overflowing waters. In districts such as Catacaos, flood levels have reached nearly to the treetops.

Landslides and heavy rains have become a daily occurrence in many of these areas.

National and international experts from UNFPA and partners carried out an assessment at the end of March, evaluating the needs in La Libertad, Lambayeque Lima and Piura.

Since then, UNFPA has redoubled its efforts to ensure that human rights are protected, gender-based violence is prevented, and the community’s sexual and reproductive health needs are met.

Among its responses, UNFPA is coordinating with the government to implement the minimum initial service package, a series of crucial actions required to respond to reproductive health needs and prevent sexual violence. UNFPA is also training national and local health providers to meet the needs of women and young people.

Safe spaces are being secured to provide psychosocial support to survivors, and to expand access to sexual and reproductive health care.

Humanitarian supplies are being procured. These include emergency reproductive health kits, dignity kits – which contain hygiene supplies such as soap, clothes and menstrual pads – as well as nutrients, mosquito nets and water purification tablets.

UNFPA is also helping to organize a platform for young people to participate in the emergency response and to voice their needs. 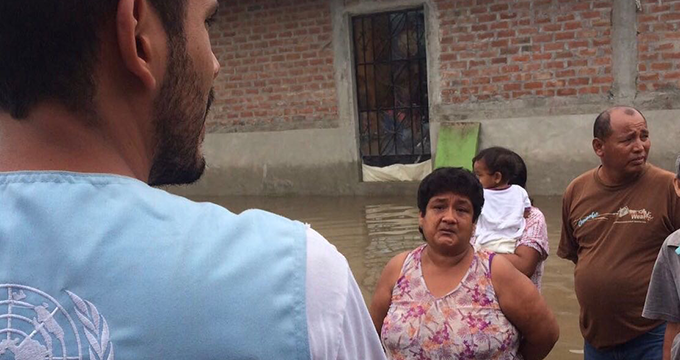 Over 1 million affected by brutal flooding, landslides in Peru