It was late February, and the baby wasn’t due until April. Her husband had left their home in Rakiraki Town to travel to Baleisere Village, where they both grew up, because the couple had heard that only two or three homes in the village were left standing in Winston’s wake, and they were concerned about their parents’ well-being.

"I woke my older son up, and we started walking to the hospital,” says Elenoa, who, though in labor, proceeded to travel by foot for over a half-an-hour on dark roads covered with debris, before arriving at the UNFPA-supported Rakiraki Hospital. “I gave birth around 8 a.m., and was then able to have breakfast.” The baby was a healthy girl.

When Winston hit, Elenoa and her family were living in a temporary settlement close to the school that their other two children, ages 17 and 14, attended. Their home – which, like most in their community, was a temporary structure – was almost completely destroyed, and Elenoa arrived at the hospital without clothing or supplies.

After her daughter was born, Elenoa was given a dignity kit including clothes for both her and her baby and other hygiene supplies. As she looked through it, she kept repeating, “Thank you, thank you so much.”

"I really appreciate these kits because the women that we are receiving right now hardly have any clothes for their babies and for themselves," said Sheryn Lata, a midwife at Rakiraki Hospital. 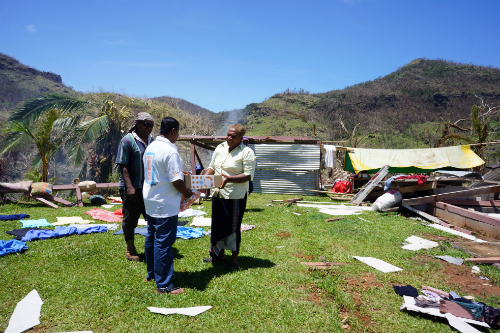 A women receives a dignity kit in a hard hit part of the country. © UNFPA Pacific Sub-Regional Office

But despite her travails, Elenoa was lucky. Approximately 340,000 people, or 40 per cent of Fiji’s population, were impacted by the category 5 cyclone – the worst storm ever recorded in the southern hemisphere, and approximately 5,600 of them are pregnant women. The storm also completely destroyed eight large hospitals and damaged 55 others enough to limit their functionality, meaning many women have had to travel much further than Elenoa to find a functioning facility – if they can access one at all.

It has been one month since the cyclone hit on 20 February, killing 44, and many medical facilities are still without power, 25,000 individuals remain displaced, with many more in need of humanitarian aid, and over 1,500 women impacted by the destruction are expected to give birth before summer.

The inability to access reproductive health services in times of crises greatly increases risks of maternal and infant mortality, and today, 60 per cent of preventable maternal deaths take place in crisis and fragile settings.

In addition to providing dignity kits and reproductive health care, gender-based violence (GBV) services are a critical part of meeting the needs of vulnerable women and girls in Fiji. According to the Fiji Women Crisis Center, 64 per cent of women in the country suffer physical and/or sexual violence at the hands of an intimate partner in their lifetime, and in times of crisis, rates of GBV often spike.

In the month since Winston wrought its devastation on Fiji, UNFPA has distributed over 1,000 dignity kits to women, procured 4,400 more and provided 150 reproductive health kits to medical facilities to ensure they can continue to offer life-saving reproductive health services despite damages or lack of electricity. UNFPA is also supporting the deployment of 20 additional midwives in highly impacted areas.

In addition, the organization is working to strengthen referrals to GBV service and provide post-rape treatment kits, and it helped establish eight official women-friendly tents where women and children can stay without fearing for their safety.

“[The response] is about meeting the basic needs of the glue that holds the fabric of our communities together in times of crisis – women,” said Dr. Laurent Zessler, director and representative of the UNFPA Pacific Sub-Regional Office. “We must ensure that services for pregnant women and childbirth facilities remain accessible. And women and girls must be able to protect themselves from unwanted pregnancies and from sexual violence.” 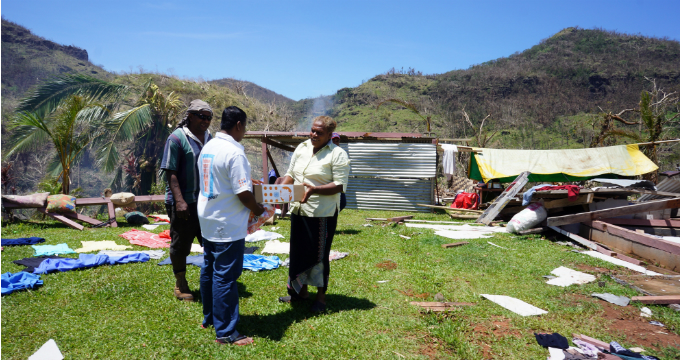